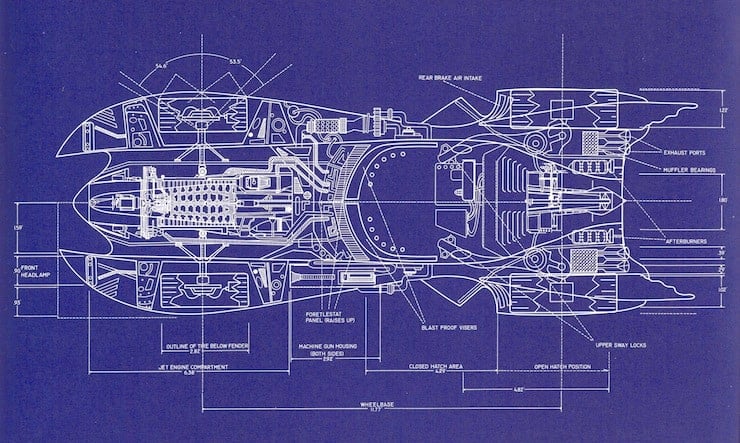 Everyone at some point has thought about being a superhero and performing superhero tasks. But, everyone knows that no superhero is complete without owning an awesome vehicle to drive.

Enter the blueprints to the infamous Batmobile. Yes, the same Batmobile that was designed by Robert Lattin and driven by Batman everywhere in the Tim Burton franchise.

The Designs Reveal What Batman Got to Experience

You can own the inner details of Batman’s infamous ride. If you look closely you will be able to see all the extraordinary components of the Batmobile. With a blast proof windshield, jet engine, thruster panels, machine gun, and more; there’s no end to what the Batmobile can do. Except, hold your drink since there are no cup holders. But, who has time for a drink when they’re fighting crime everyday anyway.

Although you won’t be able to build your own Batmobile from the information on these blueprints you will be able to tell the dimensions of each piece. If you are an avid Batman fan you can see various blueprints hanging on the walls of Batman’s lair and other places in multiple Batman movies. They always show the general idea and layout of the Batmobile, but rarely give instructions or full details.

You won’t be able to build your own Batmobile from scratch with these blueprints. But hey, your kind of one step close. Kind of. So, what does a Cup of Joe from the $11,000 Espresso Veloce RS Black Edition taste like? We have no idea but our kitchen needs this high-end coffer maker.
Read more
Gear

Crushed Iconic Movie & TV Cars That Belong on Your Wall

Mattel and Tesla teamup on a pair of RC Cybertrucks shipping late 2020 - but in limited numbers for a 1:64 scale model and 1:10 scale already sold out.
Read more
Gear

Jeep teams up with Colorado-based bike builder QuietKat on what the automaker claims is “the most capable off-road electric mountain bike there is.” Is it?
Read more
Gear

Good Reads: F1 Mavericks May Just Be the Ultimate Book for Formula 1 Fans

F1 Mavericks examines the epitome of motorsport endeavors during the period of 1958-1982 through the lens of the late racing photographer Pete Biro.
Read more
Gear

The 2,573-piece LEGO Defender Technic set drops in October 2019; the 2020 Defender SUV in September. Is this a glimpse at the real thing? We love it anyway.
Read more

LEGO DeLorean Time Machine: Going Back to the Future in Style

Crushed Iconic Movie & TV Cars That Belong on Your Wall