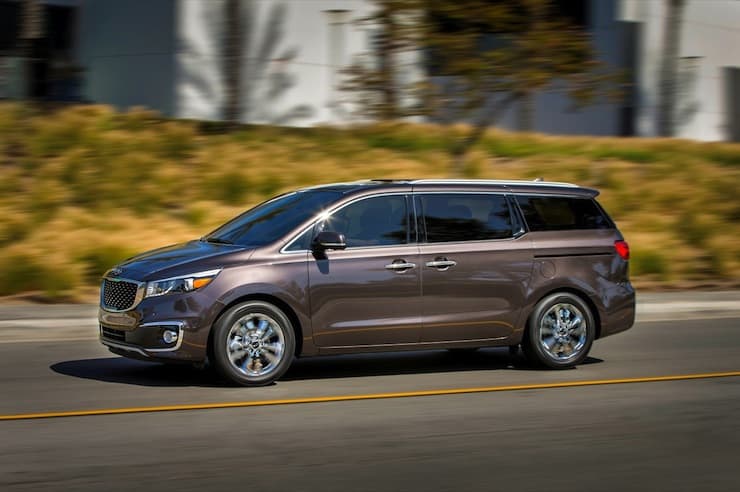 Despite society’s distaste for the not-so-sexy minivan, larger families do value them. That’s pretty much a fact. For our 2015 Kia Sedona review, journalist Chris Chase puts the Korean-based minivan to the test.

A minivan’s interior makes or breaks it as a practical people mover. Do the second-row seats move easily to allow third-row access? Do the rear-most seats fold out of the way easily to expand cargo space? Does it have a low floor to facilitate loading kids and bulky stuff?

The Kia Sedona’s options list raises some different questions, however. For example: do you need two sunroofs, both of which slide open? How about second-row captain’s chairs with leg rests? Could you use a pair of 115-volt household power outlets?

RELATED: All our Kia Reviews In top SXL+ trim, the Sedona carries a $46,200 price tag, which is certainly pricey, but allow me to propose a few ways to offset the additional cost relative to this van’s more affordable trims.

You’ve seen high-school grads parading through town in limousines, surely? When your high-schooler graduates, you can save cash by offering to be the limo driver. Load up the kids (who may or may not be wearing paper bags over their heads by this point), raid the dollar store for glow sticks, slide the rear sunroof panel open, and voila: instant party bus.

Feeling stressed? Let someone else drive while you recline in one of those swanky captain’s chairs. I literally fell asleep in one while waiting for my wife at the bus station. Bingo: no more expensive massage sessions needed.

Want a home office, but can’t afford a renovation? The top-end Sedona includes two 115-volt power outlets: plug in your laptop, score free wi-fi by parking outside your local Starbucks, and get to work. Standard under the hood are Kia’s 3.3-litre V6 engine and six-speed automatic transmission, both of which work well here, providing solid performance (in an empty van, at least) and an unobtrusive soundtrack from the engine.

Kia’s fuel consumption ratings vary based on trim, but there’s no explanation as to why. In any event, the SXL (and by extension, SXL+) is the thirstiest of all by a meaningful margin, at 14.2/10.5 L/100 km (city/highway), and my tester averaged 15.1 L/100 km in mostly city driving.

Beyond the powertrain, the Sedona’s drive is predictably unexciting. The steering is light and delivers little feel (the SX’s drive mode select variable assist system is a useless gimmick), and a ride biased toward comfort makes for relaxed handling. Among the Sedona’s competitors, Honda’s Odyssey and the Toyota Sienna feel more buttoned-down on rough pavement, but drivers largely unconcerned with driving dynamics will find lots to like in the Kia’s comfortable front seats , which are finished in Nappa leather in the SXL.

Those fancy second-row seats offer all kinds of adjustments, including side-to-side movement to allow either easy passage through the middle, or enough space for slim and/or agile passengers to move between seat and door opening to get to the third row. As in most minivans, you have to remove the second-row seats if you need them out of the way, and they’re heavy things if you’re doing the job on your own; there’s no under-floor stowage option here.

If $46,200 seems rich, consider that Kia’s own Sorento crossover is $500 more in its similarly-equipped top SX+ trim. It’s got AWD, but a smaller interior than the Sedona, so consider your priorities.

Chris Chasehttps://chrischasescars.com/
Chris has been writing professionally about cars since 2004, in print and online. He lives in Ottawa with his wife and two feline tyrants. In rare quiet moments, he can be found travelling or playing one of his way-too-many guitars. Chris is also a journalist member of the Automobile Journalists Association of Canada (AJAC).
FILED UNDER:
New CarsCar ReviewsKiaKia ReviewsMinivan Reviews

If you're in the market for a Kia SUV or crossover, here are all 5 models you need to know about. Including Soul, Seltos, Sportage, Sorento & Telluride.
Read more
Kia

Both the Hyundai Palisade & Kia Telluride are built on the same platform so which 3-row SUV is right for you? Full comparison of price, interiors, and more.
Read more
Kia

Kia ramps up its stylish compact 4-door with a new sporty GT model putting down 201-hp from a new 1.6L turbo engine. Not quite a Stinger, but getting close.
Read more
Kia

What's the difference between the Telluride and Sorento SUVs? Kia's two big sport utiities offer cargo, capability, and tech but are not alike in many ways.
Read more
Kia

Redesigned for 2020, the 3rd-generation Kia Soul is bolder, sleeker and less goofy than before. But in a hyper competitive CUV market can it still compete?
Read more
Kia

Is Kia's big SUV now the sport utility to beat among the 3-row mid-sizers? We put the 2020 Telluride SX to the test, showing strengths & few weak spots.
Read more
Kia

New 2020 Kia Telluride Pays Homage to the Rugged, Boxy SUVs We Grew Up With