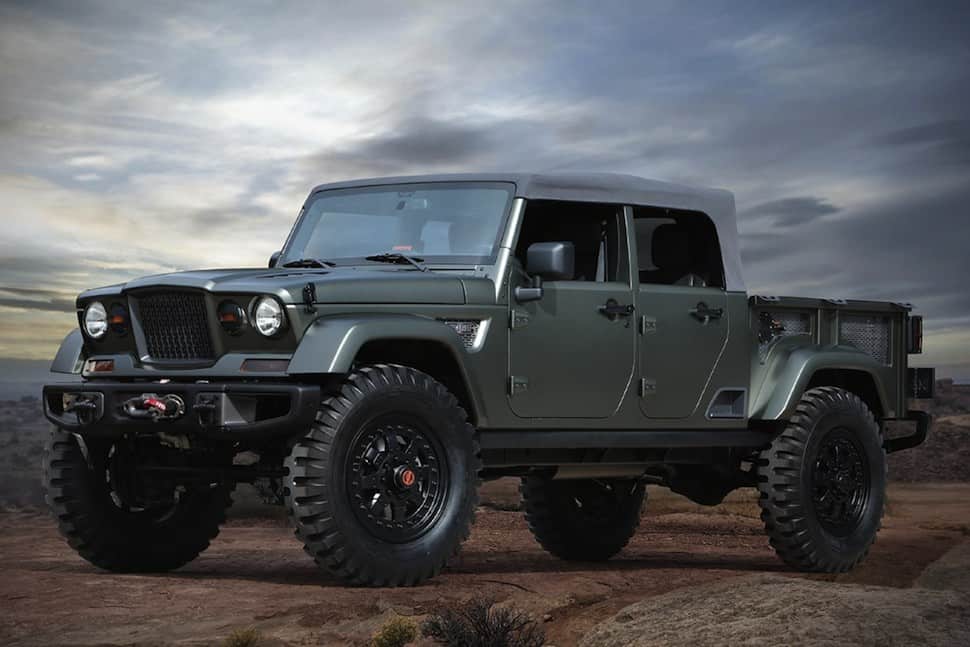 Fusing classic utility and style with the modern core of a Wrangler Unlimited, the Jeep Crew Chief 715 Concept heads to annual Easter Jeep Safari in Moab, Utah, next week.

Jeep’s new Crew Chief 715 Concept is part modern Wrangler, part Kaiser Jeep M715 – a civilian-issue pickup based on the original Jeep Gladiator offered back in the 1960s and for only a couple of years. The U.S. Government purchased these trucks to replace the M37. Between 1967 and 1969 over 33,000 trucks were produced at the Toledo, Ohio plant.

Fast forward to 2016, Jeep pays homage to this iconic military vehicle with this badass concept, clad in a tactical green guise, a five foot cargo bed, steel front and rear bumpers, and 20-inch headlock wheels wrapped in 40-inch rubber. The military theme is completed with leather bucket seats, aircraft-style control switches, and a giant compass mounted in the dash.

For those who feel the Wrangler impedes their masculinity, the Jeep Crew Chief 715 Concept is the perfect remedy. A Jeep Wrangler with a V8 may be in the works if this Wrangler Rubicon 392 Concept is any indication. 450-hp, 0-60mph in under 5-seconds, lifted & more.
Read more
Jeep Gladiator

The 3.0L EcoDiesel V6 will give Jeep the most powerful diesel in the mid-size class & highest torque rating of any small pickup upon official release date.
Read more
Culture

With plans to trek from Arizona to Alaska for some fly-fishing, Arknonik built one lucky couple the ultimate 1995 Land Rover Defender, dubbed the Wader 110.
Read more
Gear

Jeep teams up with Colorado-based bike builder QuietKat on what the automaker claims is “the most capable off-road electric mountain bike there is.” Is it?
Read more
Chevrolet Silverado

Got a Gladiator and need to tackle the white stuff? Jeep is offering the North Edition upgrade to the Gladiator Overland to tackle those frosty commutes.
Read more