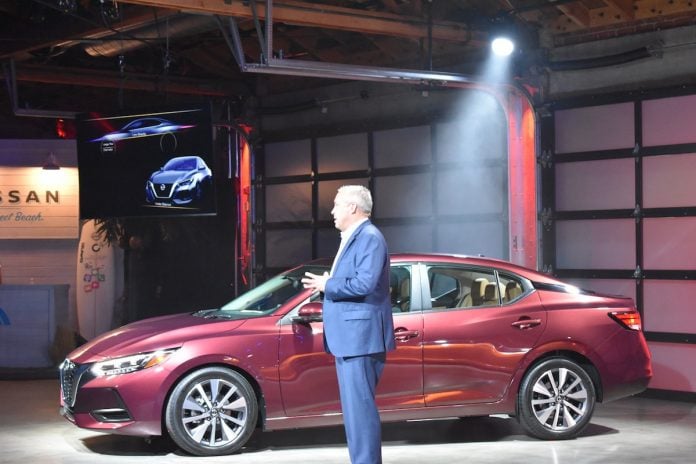 Los Angeles, CA – The Sentra compact sedan is North America’s biggest selling Nissan, having shifted more than 6-million examples since its introduction in 1982. In recent generations at least, it’s been more fleet-friendly and functional than sleek and stylish, but that all changes with the all-new eighth-generation model, which arrives at dealerships in February 2020.

The 2020 Sentra rides on a brand-new platform that will also see use in unnamed future models. It’s 2-inches lower and 2-inches wider than before, which not only results in better aerodynamics – a drag coefficient of 0.27 vs 0.29 before – but much more appealing styling. Nissan’s signature floating roofline is featured and there are three two-tone paint schemes available.

There’s more style inside, too, including more luxurious-feeling cabin materials like available leather and brushed aluminum, a D-shaped steering wheel, NASA-inspired Zero Gravity seats and an optional, all-new infotainment system with Android Auto and Apple CarPlay connectivity via an 8-inch floating central display. Nissan says it’s paid attention to the feel of steering wheel and the smooth operation of dials and switches for a more premium-like experience.

Under the hood is a new, 2-litre, 4-cylinder engine rated at 149 HP and 146 lb-ft torque – increases of 20% and 16% over the previous 1.8-liter – and a manual transmission will be available. Fuel economy should be better too, but there are no numbers yet. Independent rear suspension and dual-pinion rack power steering promise better dynamics than the outgoing car.

On the safety side, Nissan Safety Shield 360 – comprising six driver-assistance technologies – is standard across the range, as are 10 airbags.

Pricing info will be revealed closer to the car’s launch – February for Canada late-January for the US – but they’re expected to rise over the current model, which is no surprise given the huge leap in style and technology between the two cars. Nissan expects the 2020 model to attract new buyers to the Sentra, which will be pitched to private buyers rather than fleets to protect residual values, providing a more robust challenge to the likes of Civic, Corolla and Elantra. Trim levels will be similar on both sides of the border.

Nissan will stick it out with the 4-doors

At the global reveal in Los Angeles, Nissan emphasized that – unlike the domestic brands – it’s not giving up on sedans. They’re still responsible for 4 million sales per year industry-wide in North America and compact sedans continue to represent the third largest segment overall, with a particularly high appeal to younger buyers. The Sentra is the last of Nissan’s four sedans (including the new Altima) to be redesigned in the past two years, giving the brand perhaps the freshest sedan lineup in the industry.

Nissan's heavy-duty pickup gets big updates for 2020. Diesel engine is gone but V8 is more powerful, 9-inch infotainment is new, and styling is updated.
Read more