Review: 2015 Mercedes-Benz GLA 250 4MATIC Is Sleek and Quirky Yet Easy To Like 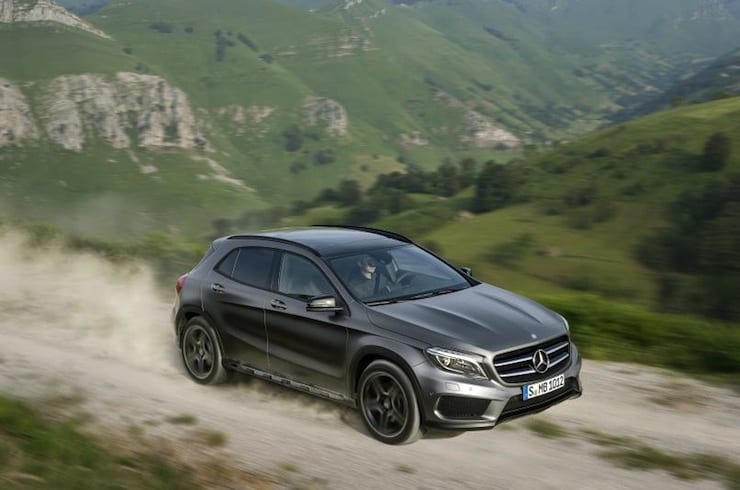 As luxury carmakers continue to explore the market for small, upscale vehicles, and the apparent demand for compact SUVs grows, there’s bound to be some crossover between the two. In the last few years, Mini (Countryman), Buick (Encore), Lexus (NX), BMW (X1) and Audi (Q5) have all added small crossovers to their lineups, and now there’s another: the Mercedes-Benz GLA-class. From a brand long associated with staid sedans and bulky SUVs comes a decidedly quirky-looking little hatch, reminiscent of the Nissan Juke without that car’s fever-dream influence. The GLA is based on the CLA sedan (Benz calls that four-door a coupe) but comes with a more practical interior, standard all-wheel drive and more ground clearance.

Looks are subjective, but I like the GLA’s lines. The upright grille full of three-pointed star is a bit in-your-face, but for better or worse, it leaves no doubt this little thing is related to Benz’s largest, priciest models. Out back, the wide, squat tail (the effect is more striking in person) is nicely detailed, especially the brushed chrome lower bumper with integrated tailpipe finishers. This car may be relatively inexpensive, but it doesn’t look out of place next to the S- and GL-Class models it shares showrooms with. Give it the gears

Like most Mercedes models, the GLA only gets exciting once performance tuner AMG gets its hands on it (the GLA 45 is their take on this car) but my tester, the GLA 250, is a far tamer vehicle. Power comes from a turbocharged 2.0-litre four-cylinder making 208 hp and 258 lb-ft of torque; it’s the second figure that plays the prominent role here, giving the GLA good punch off the line, and allowing the seven-speed dual-clutch transmission to short shift without completely stifling acceleration.

That transmission is one of my beefs with this car: that short-shifting tendency happens in both normal and sport modes. It’s only when you set the car to sport and put the boots to it that it wakes up and holds gears a little longer, but will often still aim for top gear in highway driving, dampening the car’s responsiveness to throttle inputs. The most satisfying performance comes in manual mode (normal, sport and manual settings are accessed via a centre-stack button), with shifts commanded by the wheel-mounted paddles.

Ideally, you’d be able to change gears using the shift lever, but as with many of its other models, Benz has moved this from the console to an annoying little stalk on the right side of the steering column. In the end, you’re best off leaving the gearbox to shift itself, and using your right foot to command the performance you want.

Over the road, the GLA is a lot of fun, if not outright sporty: handling is sharp, the steering quick, and the chassis takes well to being chucked around. All of that is balanced against a suspension that favours comfort, but never feels too soft. If you want more starch in your suspenders and more impressive performance, the GLA 45 is the one to get. Small on the outside means compact inside, too. The GLA is largely a “lifestyle” vehicle, conceived for young owners whose needs don’t yet include loads of interior space.

Still, the 422-litre trunk is big enough to be useful, and expands to 1,235 with the rear seats folded. Likewise, the rear seat is handy enough, but the optional panoramic sunroof takes a big cut out of headroom back there.

Among the GLA’s interior curiosities are two(!) ashtrays, one up front, one in back, and three cup holders between the front seats. This does not make up for the lack of small-item storage space for cellphones, wallets and the like. The display perched above the centre stack isn’t a touchscreen; it’s controlled by a knob next to the driver’s thigh, and despite my general misgivings about this type of interface (Benz calls it COMAND), it works quite well. It helps that the climate controls get their own hard buttons and dials, leaving the COMAND knob to handle navigation, most stereo functions, and other less commonly-used menus. Archaic as it may sound, my favourite thing about it is being able to use it to simulate a rotary radio tuner.

That screen is where the backup camera broadcasts what it sees, but it only works when the stereo is turned on, which is pretty dumb.

Mercedes’ base price for the GLA is a bit more than $37,000 which, upscale vehicle or not, is already a lot of coin for what is really a small hatchback with all-wheel drive and a lifted suspension. Adding my test car’s navigation, automatic climate control, blind spot assist, panoramic sunroof, power tailgate, backup camera, and auto-dimming mirrors (among other things) costs nearly $6,000, turning the GLA into a $43,000 proposition. For the sake of argument, a loaded-up Subaru XV Crosstrek offers similar capabilities with much more standard technology, for less than $32,000. Aside from the obvious appeal (to some drivers) of the Mercedes-Benz name, the GLA mostly looks and feels good enough to justify the price, but take that touchy-feely stuff out of the equation, and this car is nothing like a good value for the money.

Yet there’s a charm here that belies Benz’s reputation as a maker of cars designed to appeal to an older, affluent crowd. Attempts to attract younger buyers – especially those with money to spend on an upscale car – often meet with mixed results. Mercedes has made a solid effort toward that end with the GLA, a quirky small crossover whose easy-going nature makes it easy to like, whatever the price.

You’ll like this car if: You want an upscale look and feel in a vehicle with a city-friendly footprint.

Chris Chasehttps://chrischasescars.com/
Chris has been writing professionally about cars since 2004, in print and online. He lives in Ottawa with his wife and two feline tyrants. In rare quiet moments, he can be found travelling or playing one of his way-too-many guitars. Chris is also a journalist member of the Automobile Journalists Association of Canada (AJAC).
FILED UNDER:
Subcompact SUV CrossoversLuxury Subcompact SUV Crossovers