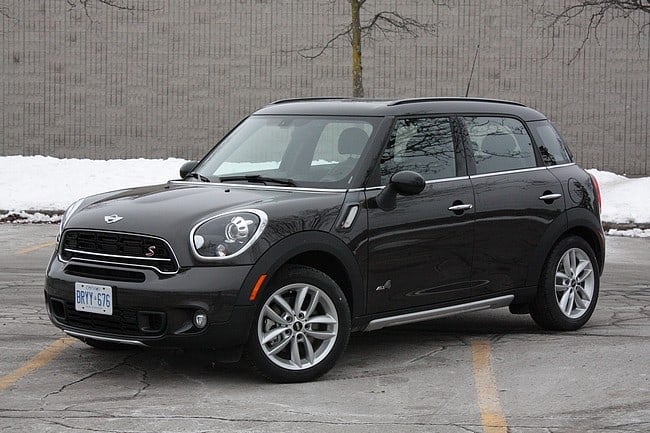 We review the 2015 MINI Cooper S Countryman that targets brand-loyal owners looking to move up to a larger, more capable vehicle.

Purists be damned, car companies exist to sell cars, and they can only do so if they build vehicles that people want. The Mini Cooper is popular, but small, its appeal limited to those whose lifestyles fit into its tight interior. Naturally, there are many who love the Mini but want a roomier vehicle, so the brand answered that call with the 2010 Countryman, an upsized model that also played to the popularity of crossovers, with a taller roof and ride height, and all-wheel drive.

While the Mini Cooper hatch was completely redesigned for 2014 (and gains a four-door variant for 2015), the Countryman gets just a minor facelift whose updates you’d be hard-pressed to spot without a 2014 to park next to.

Functionally, Mini says the Countryman gets additional underbody protection and better soundproofing, the latter a necessity in the face of the new Cooper hatch’s more grown-up feel. Even with that in place, the Countryman is still noisy at highway speeds. Forgetting the Countryman’s standard all-wheel drive (in Canada), this bigger model’s benefits next to the Cooper hatch are obvious: better interior space, especially in the rear seat, and more than twice the trunk space.

The vestiges of a centre-rail accessory system (which used to run the length of the passenger cabin and limited the Mini’s seating to four) can be seen between the front seats, where attachments can be placed to store sunglasses or a smartphone. Since 2012, the Countryman has been a five-seater, but the narrow cabin means fitting three across is about as feasible as in any subcompact car.

Mini was at the leading edge of the compact crossover trend, and now sits at the sporty end of a spectrum that includes the Mercedes-Benz GLA, Buick Encore and, if you’re willing to step out of the premium arena, the Chevrolet Trax and Nissan Juke.

The Juke is arguably the Mini’s closest competitor in terms of driving dynamics: the Countryman adopts the sharp handling its smaller stablemates are known for but, typically for a German-built vehicle, feels heavier over the road than its extra 30 kg over the Japanese-built Juke would suggest.

The Countryman’s weight has a more noticeable effect on the 1.6-litre turbo’s fuel consumption. My tester averaged 10.6 L/100 km in city driving, against Natural Resources Canada five-cycle ratings (in effect as of the 2015 model year) of 10.1/7.8 (city/highway) for the automatic transmission drivetrain. Weight, and standard all-wheel drive, add up to about a 15 to 20 percent fuel consumption penalty over the old (pre-2014) Cooper S. (Note: we had originally published fuel consumption ratings of 8.7/6.5 (city/highway), but these are the old, two-cycle test results, which BMW Canada hadn’t yet updated on Mini.ca, or in its press materials for the 2015 Countryman.) This engine is a blast with a stickshift, but the automatic is a decent unit. It can be a bit clumsy about choosing between first and second gears for accelerating from a near-stop; it’s better at delaying an upshift if it senses you’re not done accelerating, even if you have to lift off the throttle partway through.

The Countryman’s weight has a more noticeable effect on the 1.6-litre turbo’s fuel consumption. My tester averaged 10.6 L/100 km in city driving, against optimistic official ratings of 8.7/6.5 (city/highway) for the automatic transmission drivetrain. That’s about a 20 percent penalty compared to the previous-generation Cooper S (which used this engine).

My tester came tricked out with the essentials package ($1,400; heated front seats, drivetrain sport mode, LED fog lights); the loaded package ($1,100; auto-dimming rear view mirror, front centre armrest, automatic wipers and headlights, Xenon headlights and automatic climate control); and the wired package ($1,400; navigation, smartphone integration, and voice-activated Bluetooth, though basic Bluetooth functionality is standard in the Countryman), plus the $1,300 six-speed automatic transmission and front windshield defroster ($190) as stand-alone extras, all of which took the as-tested price to about $37,800 before freight and taxes.

For a little more than $30,000, Nissan’s Juke comes similarly equipped. It’s a bit smaller inside, and the styling is certainly more controversial, but it’s equally compelling as a driver’s vehicle.

Regardless of the price, I expect any 2015 model-year vehicle’s Bluetooth system to work with any smartphone, but the Countryman refused to talk to my Android device. Much like the VW Tiguan I reviewed a few weeks ago, the Mini Countryman is priced and packaged not to appeal to the general crossover-shopping public, but to court brand-loyal owners looking to move up to a larger, more capable vehicle.

It’s as charming as a Mini should be, but value-conscious shoppers can expect to be disappointed with the cost-value proposition here, notwithstanding the Countryman’s entertaining drive.

You’ll like this car if: you really dig the Mini Cooper, but need more space.

Chris Chasehttps://chrischasescars.com/
Chris has been writing professionally about cars since 2004, in print and online. He lives in Ottawa with his wife and two feline tyrants. In rare quiet moments, he can be found travelling or playing one of his way-too-many guitars. Chris is also a journalist member of the Automobile Journalists Association of Canada (AJAC).
FILED UNDER:
New CarsCar ReviewsMINIMINI ReviewsMINI Cooper ReviewsSedan Reviews