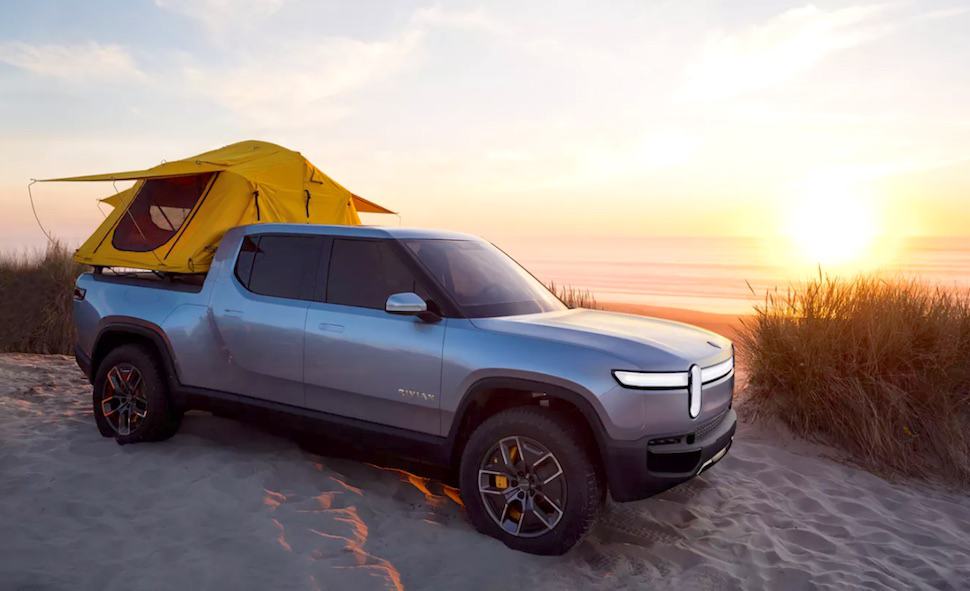 You got to give it to South Cali-based automotive startup Rivian, who have been working in near secrecy for almost a decade, building an all-electric pickup officially revealed last night at the historic Griffith Observatory ahead of the 2018 LA Auto Show press day tomorrow.

With the likes of Tesla making all the electric news, this small company with 600 employees has flown under the radar. Well, the secret is finally out.

The R1T — a refined, 5-passenger pickup with adventurers in mind — will sprint 0-60 in a mere 3-seconds, tow up to 5,000 kg, provide around 800 kg of payload, all with up 400+ miles of range. And frankly, looks badass exuding attitude you don’t typically see from electric vehicles. So we expect Rivian’s upcoming SUV to floss the same design philosophy.

R1T vs Ranger vs Tacoma

Size-wise, the R1T compares to a Ford Ranger or new Toyota Tacoma, with an exact wheelbase of 226-inches making it slightly longer than these two models; and bit taller as well measuring 71.5-inches in height.

This mid-size hauler won’t come cheap. Nor should it considering it’s capabilities. Expect to pay US$69,000 for the base trim powered by 4 electric motors and a 230+ mile range from its 105 kWh battery. The company is taking $1,000 pre-orders now.

Produced out of Rivian’s Normal, Il plant in the US, expect the R1T production to being 2020 for the $69,000 base trim, following the production of some higher-end versions first.

At nearly $70,000, the price-tag is hefty for a small pickup in a segment that’s heating up with the likes of the resurging Chevy Colorado, upcoming Ford Ranger with a $30,000 MSRP, and popular Toyota Tacoma. But again, the R1T isn’t your typical mid-size truck.