The new Defender doesn't even come close to these badass examples 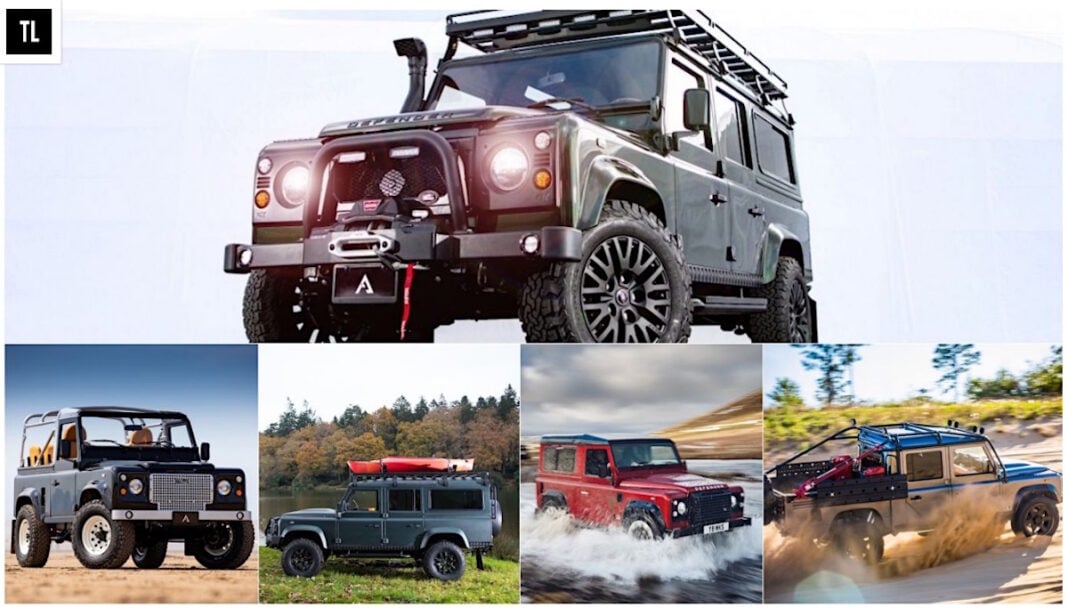 Let’s be frank: the older Land Rover Defenders put the new, glossy model to shame. Sure, the British brand will sell a bazillion units of the reimagined 2020 Defender to a wider market starting at $50,925 in the US, but traversing mountains and ripping through rivers in a classic, utility-focused SUV can’t be beat. Same could be said about the resurgence of the new Ford Bronco when compared to the nostalgic, badass models from a few decades ago – but we digress.

First, a bit about the Defender

First launched in 1948, the Land Rover Defender utility off-roader was first developed from the original Land Rover Series over 67-years ago. Fast-forward to 2015, the British automaker announced the Defender would end production in December 2015.

In 1990, Land Rover shifted from the Defender 90 to simply the Land Rover Defender in 1989, the same year the new Discovery SUV entered the wary market, only to be banished around 10 years later before being resurrected in 2015 to replace the awkward-looking LR2.

Well, the iconic SUV is back – both on the silver screen in the new James Bond film No Time to Die, and the dealer showrooms with the 2020 Defender 90 First Edition.

Here, some of our favourite old Defenders in recent years:

Limited to only 25 units for 2021, Defender Works V8 Trophy owners get an exclusive Land Rover Trophy adventure competition at Eastnor Castle thrown in. Powered by burly 5.0L V8 matted to an eight-speed ZF automatic transmission, this limited-run Defender will put down 400-hp to conquer the rough stuff. Rolling on body-colour heavy-duty steel wheels wrapped in mud-terrain rubber, both the brake assembly and handling gain an upgrade, with other off-road goods in the mix, including a front winch, a multi-point expedition cage, roof rack above with spotlights, underbody protection, an A-bar, and raised air intake. Inside, the old-school vibe continues with a Land Rover Trophy clock face by Elliot Brown and sporty Recaro seats nestled within an all-black cabin.

Customized by the folks at UK-based Arkonik for a lucky couple who clearly have a passion for adventure and road-tripping, this 1995 Land Rover Defender 110 has some serious plans in store. Dubbed the Wader 110, the Ginger Auto Grain Leather interior over 9 seats and a 15” Evander wood steering wheel, matching leather gear gaitor and door cards, black suede heading, and touch screen display with Apple CarPlay and reversing camera display by Pioneer, ramp up the luxury and tech inside.

In contrast to the aggressive, off-road worthy 1989 FARGO D90 recently built by UK’s Arkonik, this 1989 D90 is all about coasting, enjoying the beach vibes, and taking it easy. No invasive front tow hooks, massive roof mounted light bars, or insanely burly tires here (not that there’s anything wrong with that). The SoCal D90 is a refreshing take on the typically brash Defender — it’s clean, simple, and equally as gorgeous with its silver Heritage grille, bumper and frame to offset the gleaming Java Black paintwork.

This blacked-out 1989 Defender in Mariana Black Pearl retains its classic charm while adding a good dose of ‘urban attitude,’ according to the builder. Artistically reimagined, much like the location in which it was shot in FarGo Village in Coventry, the 3.5L V8-powered FARGO D90 sports a Safety Devices roll cage paired to a roof rack with rear ladder and x4 rectangular LEDs up top.

An armour clad rebel breaking out from the traditional Defender mould, this off-roading beast finds a burly 3.5L V8 under the hood, rolling on beefy Raptor-coated Mach 5 16″ alloys wheels with bead locks wrapped in BFGoodrich AT KO2 off-roaders, all housed in wideboy wheel arches. Up top, it finds a Java Black roof paired to LED spotlights and Land Rover Defender A-frame nudge bar filling this Defender out. Also based in the UK, KBX specializes in Land Rover upgrades, supplying the Renegade D110 with that menacing front grill and wing-top vents.

Named after the intrepid explorer himself, the Epsom Green painted COLUMBUS D100 bespoke Landy will haul all pertinent gear via a Front Runner roof rack with ladder and kayak mounts — rolling on burly 16-inch alloy wheels by Kahn wrapped in BFGoodrich AT tires to ensure no path gets in the way. Inside, the look is all vintage with Thatch leather trim; and heated front sport seats for cold expeditions. Add premium Alpine sound system, cargo hooks in the load area, and a wooden rim steering wheel by Evander, and you’re good to go.

Powered by a rebuilt Rover V8 engine paired to a 5-speed manual transmission, this classic Heritage Edition Defender 90 by the crew at ECD retains all the classic charm for one of last Defenders produced before Land Rover decided to end production of the iconic sport utility. The front seats and rear benches feature Saddle Leather with Barbour Tartan inserts, paired with Barbour Tartan door pockets with Barbour zip closures. The driver gets an upgraded MOMO Indy steering wheel, with sound duties handled by a Kenwood stereo with Infinity speakers, plus LED lighting throughout for good measure.

Equipped with beefy Black Steel modular wheels with beadlocks wrapped in BFGoodrich AT rubber, this Defender restore gets the more durable and fuel efficient (compared to the 300Tdi, anyway) 200TDi power plant under the hood. And with a WARN 10K-S winch, pulling power won’t be an issue. The white and black styling is classic and clean; up top, the SHACKLETON finds a Front Runner roof rack with ladder and spotlights to haul what’s needed, with the finer exterior details including Copper Black KBX signature grille and wing top vents, plus a Copper Black chequer plate.

Powered by a 5.3L Corvette LC9 V8 making a respectable 326-hp and paired to a 6-speed transmission, this is the Florida-based shop’s first build to offer a tire pressure monitoring system. Sitting on beefy 18-inch Sawtooth wheels wrapped in BF Goodrich All-Terrain KO2 tires coupled with EBC Performance brakes, Project Blackout won’t have any issues traversing uncompromising terrain when it needs to.

Rolling on 18-inch Sawtooth wheels wrapped in BF Goodrich All Terrain KO2 tires, this machine makes 430-hp via 6.2L Chevrolet LS3 V8 engine. In turn, will hit 0-60 in under 6-seconds due to a new transmission option for those selecting the LS3 drivetrain by using the T56 6-speed manual transmission. The result? A Defender 90 unlike anything we’ve seen in awhile. Inside, Project Honey Badger finds a full roll cage, classic instruments Moal Bomber gauges, ivory leather Corbeau seats with black accent stitching, to name a few.

Making 430-hp, this one-off Defender gets the same LS3 6.2L V8 planted in the Chevy Corvette, paired to a 6-speed auto transmission. Traversing duties are covered by a fully customized suspension system with King Off-Road Racing shocks and steering damper, and 2-inch lifted Old Man Emu coil springs. With the goal to produce the most exclusive custom SUVs on the market, the $285,000 Project Viper was a project commissioned by a private client doctor last year and the first SUV to come out of this new division.

Another creation by the group at Project Kahn, this 2015 Land Rover Defender 110 double cab pickup Chelsea wide track got a decent transformation that saw a 2-inch suspension lift, a fitting with a new bumper and façade complete with an aluminum sump guard, several LED indicator and side lights, front sports GTB seats made of quilted and perforated leather in dark red, all wrapped in a Chromax paint job in Volcanic Rock Satin. With only 12,900-miles at time of writing, this diesel-powered, 122-bhp Defender 110 pickup was selling for £59,999 (around US$88,000). But if it’s sold, we’re pretty sure the British shop can build you another one.

Created by Land Rover’s Special Vehicle Operations team, the automaker revealed a special Defender for the Rugby World Cup 2015 to carry (and protect) the Webb Ellis Cup throughout Ireland and the UK. Essentially, this special edition Defender is a modified 110 Station Wagon featuring a trophy cabinet with state-of-the-art technology to control temperature and locking mechanism to ensure the Webb Ellis Cup is visible at all times.

Compared to the standard Land Rover, this 105 Defender finds a hood 400mm longer and a wider stance of 150mmm. Kahn’s new pickup also gets wider, extended front and rear wings with vents and apertures, new headlights, a new front bumper with lights, side vents, and those menacing 18-inch rollers in matt black.

The Land Rover Defender Flying Huntsman 105 Longnose or, “105 Longnose” as its commonly referred to, has an extra 15 inches to its wheel base compared to the standard 90-inch wheel base found on most Land Rovers. Much like those before it, it comes equipped with a 6.2-liter LS3 V8 engine that boasts 400-plus horsepower and a six-speed automatic transmission. As a safety precaution to make sure the 105 Longnose would have enough power to stop or drive over any terrain traditional Land Rover Defender brakes and suspensions were upgraded.

When Land Rover held their 65th birthday at Packingston Estate (the ground where their off-roading vehicles were tested, even from the very first model in 1948 through the 1970’s) there was quite the slice of birthday cake delivered by a Lynx military helicopter. This model is especially a significant one in that it has been limited to 65 units in the ‘Santorini Black’ model; this exhibits what a truly special and once in a lifetime opportunity there is to own one of these vehicles.