VW's ultimate camper is now bigger and better than ever 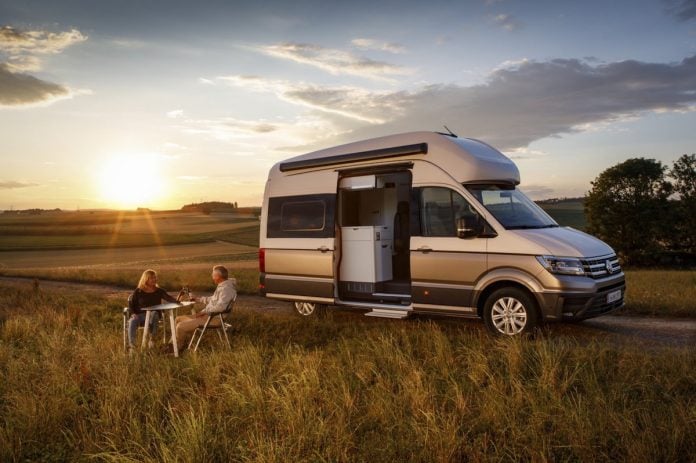 The Volkswagen Grand California is finally here in production form. VW’s ultimate, range-topping camper van will make its debut at the Dusseldorf Caravan Salon in Germany.

Unfortunately, the Grand California – along with the popular California T6 Camper –  won’t be offered in North America. So why are we featuring this VW camper van? Because it’s awesome – and if you move to Europe, you’re already one step ahead.

Based on the California XXL concept we featured last fall, the Grand California stretches out a length of 5986mm nestled upon the VW T6 California platform, and based on the medium-wheelbase Crafter van. Most likely, the extension over the tailgate we saw in the concept will be gone, yet travellers can stand up inside the camper van with its high roof.

In the back, the cooking types are greeted by a decent sized kitchen with 2 fridges including a 70-L pull-out. Up front, the seats swivel around to complement a double bench seat in the living area, along with a wet bathroom measuring 840 x 800mm.

Land Rover and Autohome team up on the new Defender 110's first, official roof tent for the serious overlanders. A premium Defender tent at close to $3,500.
Read more
Camper & Trailer

Finally, North America gets a pop-up camper and we have Mercedes-Benz to thank. Based on the Metris cargo van, here's the 2020 Weekender up close.
Read more
Camper & Trailer

Fusing luxury with off-the-grid adventure is what Colorado-based EarthRoamer does best. The new LTi based on a Ford F-550 is their most innovative RV yet.
Read more
Volkswagen Atlas

Now this is how to you camp in style. The Migrator Off-Road Camper might be the ultimate mini caravan built for overlanders and campers alike.
Read more
Camper & Trailer

Furrion Elysium Concept Might Be the Ultimate American RV

If you're shopping for the best RV, maybe the Furrion Elysium will cut it. 4k TVs, hot tub, too much tech, and a helicopter. Arrives in 2019.
Read more
Sedan Reviews

Built on a new platform, we review the 2019 VW Jetta in the Execline trim. With good value for the money and a long US warranty, the new Jetta sports Euro-style driving dynamics with the performance & economy of 1.4-turbo gas engine. The Jetta redesign looks nice, but how does the compact sedan perform?
Read more