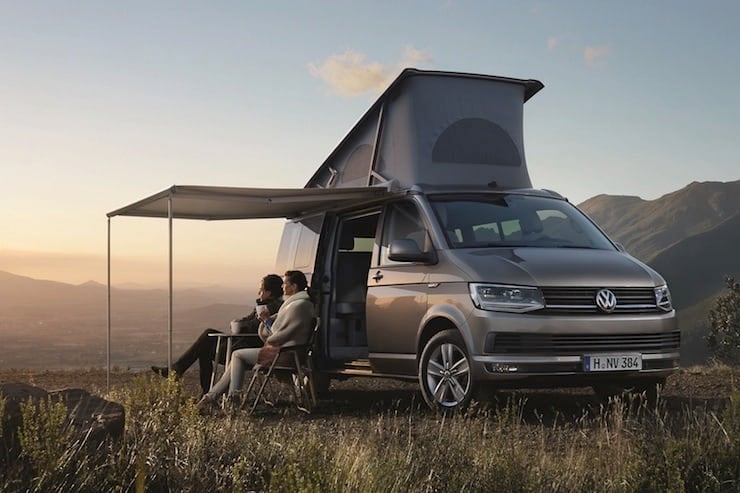 Since its launch back in 1988 and to this day the Volkswagen California remains a unique offering by being the only factory-built camper van on the market, and has pretty much set the benchmark in the sector.

Based on the recently revealed Transporter T6, the new California remains the only factory-built camper van on the market, and offers a host of improvements and new features for buyers who want the ultimate home from home.

Available in two forms; Beach and Ocean (which replaces the current SE model), the California can sleep four occupants courtesy of its acclaimed pop-up roof (electro-hydraulic on Ocean models) that neatly integrates a 1.2m x 2m double bed. Ocean models also feature a fully-equipped kitchen, complete with 42-litre refrigerator, twin-burner hob and stainless steel sink unit. Ocean models also gain a dimmable LED lighting system for the pop-up roof and tailgate and a clever multi-functional holder for the rear compartment that incorporates a cup, ashtray and towel holder all in one.

The new T6 comes with factory options for added flair or improved performance, including seven sets of rims from the 16-inch Aspen alloy wheels to the sportier 18-inch Dakar Bi-Colour rollers. Other exterior accessories include a front chin spoiler for a sportier look; lowering springs that will drop the camper by 30mm; polished stainless-steel side rails or matt black rails that look slick while offering protection; a rear tailgate spoiler; LED daytime running lights that make an impression; and a chrome tailguard cover providing rear doors some extra protection. Inside, opt for the lifestyle seat covers that will help protect upholstery from those inevitable spills. Amee Reehalhttp://www.ameereehal.com/
Shooting cars professionally since film was a thing, Amee's work has appeared in various outlets including NBC Sports, Chicago Tribune, SuperStreet, GlobeDrive, MotorTrend, and others. He's the managing editor & founder of TractionLife.com. Find him travelling, spending time with his kids and family. Or golfing, poorly.
FILED UNDER:
Adventure VehiclesBest Camper Vans