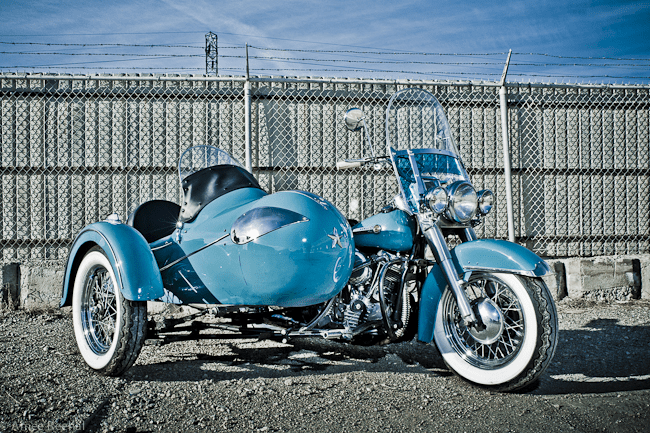 Back to a Simpler Time: This is one pan you won’t find in the kitchen – a 1950 Harley-Davidson Panhead with Goulding Rocket Sidecar

Outside of the motorcycling fraternity if you told anyone you rode an old ‘pan’ they would look at you askance. We are not, of course, talking about a well-seasoned, beat up piece of tin from the bakery. What we are talking about is one of the most legendary motors ever produced by Harley-Davidson – the Panhead.

The Panhead was introduced in 1948, and remained in production until 1965. Replacing the Knucklehead, the Panhead was essentially a new top end married to an already established set of crankcases and flywheels. However, what really set the engine apart from its predecessors was the introduction of hydraulic lifters; these helped decrease the need for constant maintenance and adjustment. Overall the Panhead was a taller motor and that necessitated a change in the Harley-Davidson frame design. Small differences, to be sure, but a big change for the company came in 1949 with the introduction of the Hydra-Glide front end. This telescopic fork replaced the old springer-style suspension and improved the handling of the heavyweight motorcycles. In solo format, a Panhead motorcycle tips the scales at 560 lbs. dry.

These big Harley-Davidson machines were designed to be highway cruisers. They are also well suited to hauling along the extra weight of a sidecar. Gord Harvey of Calgary plans to put that capability to the test. Once he has shaken the bugs out of his Azure Blue 1950 Harley-Davidson FL with Goulding Rocket sidecar restoration he plans to put some major miles on the outfit. “Eventually, I’d like to ride it down to Davenport, Iowa to attend the swap meet or to some of the vintage runs hosted by the AMCA (Antique Motorcycle Club of America),” Harvey says. “I’m not about collecting motorcycles, if I’ve got it I’m riding it.”

Since he was a little kid, Harvey, now 58, has liked motorcycles. He would run to look out the picture window of his family’s Etobicoke home every time he heard a passing motorcycle. As soon as he was legal to ride he had his own machine, and dabbled with British bikes until he was in his 20s. Then, he moved on to other pursuits such as building 4x4s and flying airplanes. But he always wanted to get back into motorcycling.

That did not happen until 2005 when he bought a brand new H-D Road King Classic. There is 60,000 km on the odometer of that machine, but Harvey says he made the mistake of purchasing the extended warranty. “I really can’t do much with the bike, and I like pulling wrenches as much as I like riding.” So he started looking around for a piece of vintage iron. His initial thought was a Harley-Davidson Panhead, but was leery of the prices some of those machines were fetching. He tried to track down an Ariel Square Four with little luck there. However, while watching eBay auctions for Panheads he found one for sale in White Rock, B.C. He was the high bidder but had not met the reserve. Harvey was able to contact the owner, one Pete Gagan, and a deal was eventually struck. Gagan is well known in vintage motorcycle circles as the past-president of the AMCA, and for his early involvement with the Canadian Vintage Motorcycle Group.

For Harvey, a large part of the attraction to Gagan’s machine was the Goulding Rocket sidecar that dates from the early 1940s, and the tank shift setup. Harvey drove to B.C. in the early fall of 2007, bought the outfit and trailered it home. It was a running, driving motorcycle that had been updated while in Gagan’s care, but when Harvey put it into service it suffered a major gearbox malfunction. “I didn’t get 20 miles on it,” Harvey recalls. “I drove my wife to the bank and parked it. When we went to leave, the gearbox was seized up solid.” That was in the fall of 2007. Over the winter Harvey stripped out the gearbox, which was filled with pieces of broken metal. He located a used set of gears for the rebuild, complete with the reverse gear, and put the transmission back together. Harvey also tore into the motor, as he had found tiny pieces of metal in the oil filter.

He had the bottom end trued and balanced and installed new bearings. There was already a set of S&S rods in the Panhead, and Harvey simply reinstalled those. To improve the bottom end torque Harvey installed a mild cam. Cylinders were given a light hone, and new rings went on the pistons. The heads were cleaned up and everything bolted back together. Early in 2008, and without the sidecar attached, Harvey fired it up and set out on a quick around-the-block shakedown ride. He was hardly out of his driveway before a young woman drove her car right into him. Harvey was injured, and so was the Harley-Davidson. She had taken out the front end of the machine, so as Harvey says, “I had to start over.”

The front end needed new fork tubes, and Harvey had to resort to using an aftermarket front fender. “I try to use as many original parts as possible, but I will use repro pieces until the original parts can be found. I’m not a stickler for originality, I’m just looking for something to run, and possibly use on a daily basis.” Harvey had the Panhead back together early in 2009. Because he has a sidecar he has been able to get out and put a few break-in miles on the outfit early this spring – 130 miles according to his rebuilt speedometer. He is starting to get used to the rigid frame, sprung solo saddle, foot clutch and hand shifter arrangement. While wrapping his head around all of that, he is also learning to ‘drive’ an outfit.

“I’m getting the hang of how to ride the thing,” Harvey says. “It’s a whole different ballgame – any big pot holes and it just bounces all over.”