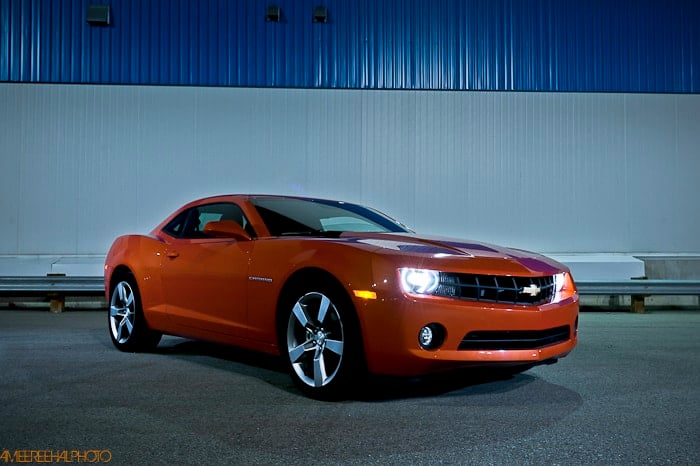 Arguably the sickest, best-styled rendition amongst the recent wave of throwback muscle cars introduced by American automakers, is the 2010 Chevrolet Camaro. While the Ford Mustang and Dodge Challenger are equally as daring, and without any bias or at risk of drawing parallels to the originals released back in the 60s as many current die-hard enthusiasts rightfully have been doing, as far as curb appeal goes, this average dude finds the Camaro unquestionably the baddest and most fearless. And starting at only $26,995 Cdn MSRP, you’d be hard pressed to find a vehicle that can make such an impact at this price-point; turning Minivan-Dads into temporary rockstars.

My tester is the 2010 Chevy Camaro RS (1LT) starting at $28,065 Cdn MSRP; the second offering in a stable of five trims available. Earlier this year, GM invited me to Whistler, BC for a few days during their Chevy sponsorship at the Telus World Ski & Snowboard Festival, where I had the opportunity, along with fellow journalist Russell Purcell from Vancouver, to rip around the post-Olympic ski resort in a yellow 2010 Camaro SS–the cream of the crop, V8 behemoth that proved to be incredibly fun to drive, both on the highway and through the twisty village roadways. Though not quite the ominous SS, this RS is equally as stunning and the likely the front runner in sales, rolling off the dealer lots. Powered by a 3.6-litre DOHC V6 engine, the RS puts down 304-hp and 273 lb-ft of torque; just enough RWD power, as I realized, to sustain a joyous grin. A 6-speed manual transmission comes standard, and for an extra $1435 as in tester, add the 6-speed automatic tranny with steering wheel mounted tapshift shifters for a bit more control. Other notable standards on the RS includes a sport suspension, front multi-link strut suspension with coil springs, and dual exhaust with polished stainless steel exhaust tips, to name a few.

Aggressively chiseled from front to back, the Camaro RS looks absolutely menacing just sitting there. And the longer I gawked at it, the more I realized how incredibly dissimilar this 5th-generation Camaro is from the previous version as recent as 2002 when production on the Camaro ended (crazy to think it’s only been eight years). Without question, the new Camaro is a true throwback in terms of exterior styling to the original introduced in the late 60s…not the IROC-Z in the 80s, nor the convertible in the 90s. Just a modern version of the original, the way it should be! Standard features include body coloured door handles and rocker mouldings; solar ray glass; fog lamps; halogen headlamps with auto on/off control, to name a few. 18-inch painted aluminum wheels are standard, but opt for the Rally Sport Package upgrade at $1995 as in my tester, adding 20″ x 8″ front and 20″ x 9″ rear flangeless painted aluminum wheels with a midnight silver finish wrapped in performance BSW tires; body coloured roof ditch moulding; a rear spoiler; and HID headlamps and unique taillights.

Again, I’m not a Camaro-aficionado but a quick look inside the cabin and it’s evident Chevy retained some prominent styling attributes from the earliest version including the larger old-school analog styled, recessed gauges. Front bucket seats, cloth seat trim, a driver 6-way power seat and passenger 2-way manual adjuster/power recline are all standards in the RS. So is a long list of others including the driver information centre; remote keyless entry; two auxiliary power outlets in centre console; folding rear seat back with trunk pass through; outside temperature display, among others. This RS came equipped with the Convenience & Connectivity Package at $1050, adding a cargo convenience net; the leather-wrapped 3-spoke steering wheel with audio controls; leather wrapped shifter knob; Bluetooth; wireless PDIM and USB port; and rear ultrasonic park assist. Even with $5775 in options (frankly, not a huge premium considering all you get…bigger rims, enhanced exterior styling, upgraded cabin), this Camaro RS rings in at only $33,840 before taxes/fees. For a sports car with distinct styling, huge impact, and nostalgic flair hovering around the 30K price point, the 2010 Chevy Camaro RS can’t be beat. Porsche has just released the eighth generation of its venerable 911. We put the 443-horsepower 2020 Porsche Carrera S Cabriolet to the test - in winter.
Read more
Chevrolet Silverado

Chevy’s new 2021 Trailblazer will bolster its offering in the small-SUV segment when it arrives late spring. But does the interior stack up to the hype?
Read more
Coupe Reviews

The N brand launched in Europe with the i30 hatchback and comes to North America with the mechanically similar Veloster N, now in its 2nd-generation.
Read more
Chevrolet Blazer

The 2019 Blazer sports a bold look but what's the interior like? How's the cargo space, how much tech is there, and is it comfortable? Here's a closer look.
Read more
Chevrolet Blazer

We review the 2018 Mustang EcoBoost with the 4-cylinder turbo that's more powerful than the GT V8 was 10 years ago. Good enough for hardcore muscle-car fans?
Read more

Does Mercedes-Benz Really Own The Ice? A Closer Look at the...