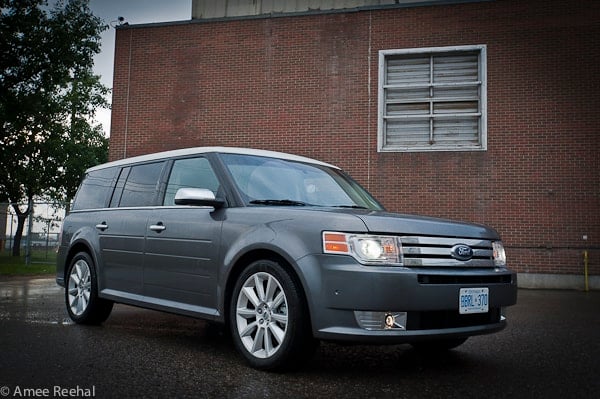 Ford innovates and Ford Flex may lead the way

Innovation and risk-taking is nothing new to Ford. With no government bailouts, no string of recalls, and yet still making it to the top, the automaker is certainly doing things right, quickly leaving the competitors in the dust. And the 2010 Ford Flex Limited with the all-new EcoBoost engine is leading the way.

When the award-winning Ford Flex first hit the streets a couple years ago (read my review HERE), this full-sized CUV with its distinctive, bold styling certainly made an impact, showcasing Ford’s ability to push the envelope within any segment. Now, with the introduction of the EcoBoost engine, the company has pushed these boundaries even further, distinguishing itself from the pack.

So what exactly is this EcoBoost engine?

It’s an all-new 3.5-litre V6 engine producing 355-hp and 350-lb ft of torque. Essentially, a fuel-efficient V6 powerplant disguised as a powerful V8. It doesn’t get much better than this…not to mention, accelerating from 0-60mph in around the 7-second mark. The AWD Flex with EcoBoost, as tested, delivers 13.1-L/100km in the city and 9.2-L/100km on the highway.

But the EcoBoost moniker is more than an engine—the name exemplifies an overall strategy and on-going effort by Ford to produce fuel-efficient powertrain systems for a variety of their products. The automaker claims, by year 2013, more than 90-percent of their North American products will ship with EcoBoost.

Considering the Ford Flex is a family-mover, the newly introduced Class III Trailer Tow package is a worthy addition, offering 4500-lb towing ability, and working in conjunction with the Flex’s other advanced technologies (including AdvanceTrac and Roll Stability Control), the Flex offers even more safety and reliability for towing needs. Also new for 2010, Active Park Assist (yep, the Flex will parallel park….itself), and Paddle Shift. All three are new-to-segment features not yet found on the competition.

The 2010 Ford Flex with EcoBoost, in the AWD Limited trim (as tested), offers a variety features, including:

Overall, the 2010 Ford Flex is the ideal ‘mini-van’ without the mini-van stigma, offering abundant cargo space, a spacious and well-designed cabin including comfortable third-row seating, and a slew of safety features, all wrapped in a bold, low-stance body. Now with better towing ability and the all-new EcoBoost engine, part of Ford’s ongoing commitment to a greener future, the Flex continues to push the envelope and lead the way introducing new-to-segment features. Amee Reehalhttp://www.ameereehal.com/
Shooting motors professionally since film was a thing, Amee's work has been published in various outlets including NBC Sports, Chicago Tribune, SuperStreet, GlobeDrive, MotorTrend, and others. He's a writer, editor at TractionLife.com, AJAC member, and full-time digital marketer at Traction Media working with national brands. Find him traveling, spending time with his kids and family. Or golfing, poorly.
FILED UNDER:
New CarsCar ReviewsFordFord ReviewsSUV and Crossover Reviews

Buying a used small SUV or compact crossover is challenging with so many choices. Here are the best models to consider based on value, design & reliability.
Read more
Ford

What's the difference between the Telluride and Sorento SUVs? Kia's two big sport utiities offer cargo, capability, and tech but are not alike in many ways.
Read more
Ford Ranger

What's the difference between the Fusion Hybrid and Energi? Is the 2019 Fusion Energi worth it? We review Ford's sleek plug-in hybrid (PHEV) sedan.
Read more
Ford