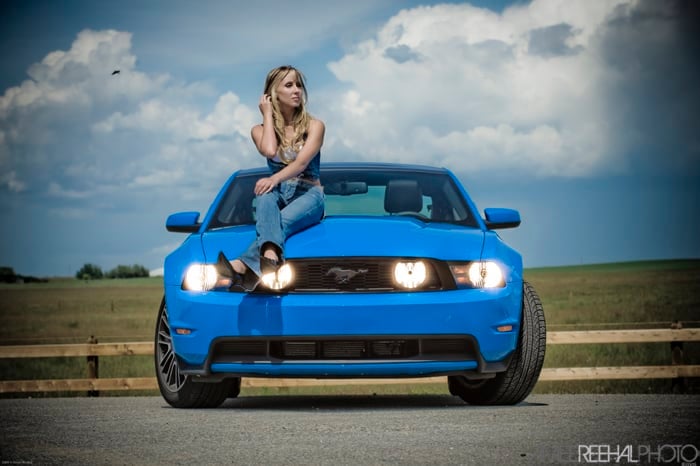 A 45 year track record as one of North America’s favourite muscle cars, coupled with Fords engineering experience and attention to detail, has rendered a leaner, meaner, and more refined 2010 Mustang GT Coupe.

Arguably the best-looking Mustang of the modern era, the 2010 version gets a muscular yet lean and sculptured new design, including an aggressive front grille adorned with the first new Mustang emblem since the car’s introduction in 1964. Inspired by the 1970 version, the headlamps and turn indicators are comprised of one unit found on the completely redesigned front-end—front-ends that are slightly different on both the V6 and V8 GT trims.

Another notable difference between the two includes fog lamps on the lower fascia on the V6, while slightly smaller and nestled in the upper grille on the V8. Rendering a cleaner look, the washer-fluid nozzles are tucked into the cowl and the antenna moved to the back, while the nostalgic aggressive styling is still very well alive, particularly in the rear with sharp angled corners and a sculptured decklid above the huge, menacing GT badge. Jump into the cabin and the all-new interior with well-crafted materials will slap you in the face, and you’ll like it. Gary Morales, Interior Design Manager for Mustang, says it best, “That’s the difference between good enough and exceptional…we wouldn’t accept anything less than leadership design and world-class craftsmanship.”

The chromed-ringed gauges are a throwback to the old school, yet precisely crafted and positioned. Genuine aluminum-finish panels are found throughout and the one-piece instrument panel is clean and seamless. The seats and armrests have high-quality stitching and are super comfortable, due largely to softer materials. The new centre stack is bold in design yet not overwhelming—includes Ford’s latest version of Microsoft SYNC.

The suspension for the new Mustang has been completely retuned, including the spring, stabilizer bars, and shocks. Despite the brawny façade, this muscle car handles surprising well both in the corners and at higher speeds on the highway. The wheel/tire combos are now 1-inch larger, ranging from 17-inch to 19-inch; this test rolls on 18-inch spoke wheels. AdvanceTrac Electronic Stability Control (ESC) is now standard, complementing Mustang’s all-speed traction control and ABS. Much of the inspiration for the new Mustang comes from the Bullitt model (Steve McQueen anyone?). Including the 4.6-litre V8, with increased power to 315-hp. Throw on a leather jacket, turn the ignition, and go for an ambition drive as you soak in the rumbling throaty signature Mustang exhaust note—you’ll feel like Lieutenant Frank Bullitt ripping through the streets of SanFran…just not as cool (like not even close). But it’s fun, and it’s badass, and that’s what really resonates with this new 2010 Mustang.

Unlike Bullitt, however, the new version is a bit safer. Including dual stage front driver and passenger air bags; front seat-mounted side air bags, and Ford’s Personal Safety System.

The 2010 Mustang GT Coupe starts at $36,999 Cdn. This tested model was equipped with many upgrades, bringing the total price (including upgrade options and fees/taxes excluding GST), comes to $44,729.

Marrying new technologies with long-standing heritage is a hard thing to pull off. But with the new 2010 Mustang GT Coupe, Ford proves it can be done with progressive new styling, a world-class interior, new technologies, and performance improvements, to name a few.  Womanizing, chain-smoking, badass attitude not included.