2011 Porsche Cayenne Review: Entry-Level with a 3.6L V6 and Tiptrontic 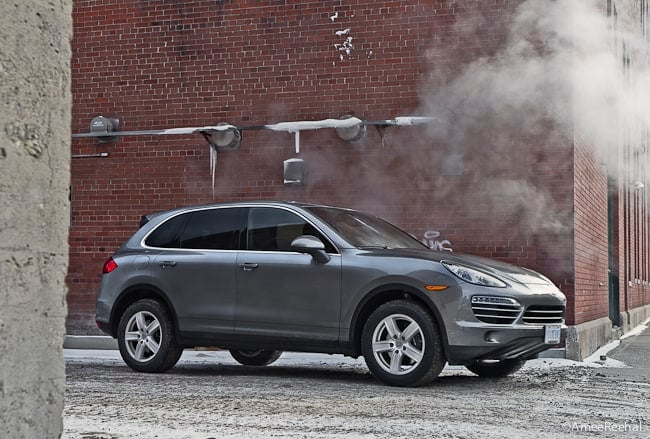 Can you believe it’s been more than seven years since the Porsche Cayenne launched in North America? Can you believe, after all these years, the 2011 Porsche Cayenne is only now the 2nd-generation offering? Well, when your SUV is your top-selling product selling over a quarter of a million units worldwide, why meddle with a sure thing? But onwards and upwards, the all-new 2011 Cayenne is lighter, more fuel efficient and spacious, and inevitably, coming from Porsche, a little sportier. The philosophy or premise behind Porsche’s development mandate is too increase power on less fuel, create greater efficiencies, and lower CO2 emissions—a principle the company dubs “Porsche Intelligent Performance,” epitomized by the all-new 2011 Cayenne where Porsche managed to increase horsepower to 300-hp while reducing fuel consumption by 20-percent compared to the former model by way of the all-new Tiptronic S eight-speed transmission with the Auto Start-Stop. Innovations contributing to these efficiencies in this new eight-speed transmission include a wide spread of gear ratios, thermal management on the engine and transmission cooling circuit, on-board network recuperation, variable engine cut-off and intelligent lightweight construction.

You’ll notice the reworked exterior styling—a lot sleeker and elegant with longer, flowing lines while retaining a bit of that beefy SUV appeal. Porsche made strong efforts to give the 2011 Cayenne more car-like character, more inline with its other product lines. Many claimed the original Cayenne looked nothing like a Porsche. Personally, I disagreed, but perhaps now we can put that to rest; the all-new sportier 2011 Cayenne certainly makes a statement with styling that is truly Porsche: new headlights; strong rear shoulderlines; rear wings typical of Porsche. The 2011 Cayenne gets a little bigger too with a wheelbase almost 1.6-inch longer, and 1.9-inch longer overall than the outgoing model. Above all, the cabin in the all-new Cayenne is dramatically different than its predecessor, finding a much needed, newly designed interior that was long overdue. Perhaps the most significant upgrade being the centre console with completely new instrumentation and buttons flanked by a couple grab handles. The entire console now sits nice and high, with a comfy yet aggressive cockpit feel. Majority of the new cockpit carries over from the new Panamera sedan, including the optional Burmester high-end sound system. The extended wheelbase makes way for more rear legroom, while the front seats are upgraded for greater comfort. A few other new features, all optional on the entry-level Cayenne, include the PDLS Porsche Dynamic Light System: the current xenon light system but now with speed related headlight control with various light modes including bad weather lights. There’s also the option Lane Change Assistant (LCA) monitoring the lanes right and left of vehicle up to 70 metres, including driver’s blind side; and the Auto Cruise Control (ACC), using radar sensors to automatically monitor cruise control speeds by gauging distance to nearby vehicles.

Porsche has taken a proven, winning product and made it dramatically better in the 2011 Porsche Cayenne V6 Tiptronic. From the sportier and more elegant exterior styling to the completely redesigned and roomier cockpit interior, along with the introduction of some new assistance systems thrown into the mix, the Porsche Cayenne is arguably the most dynamic, well-rounded SUV on the market. Hands down.