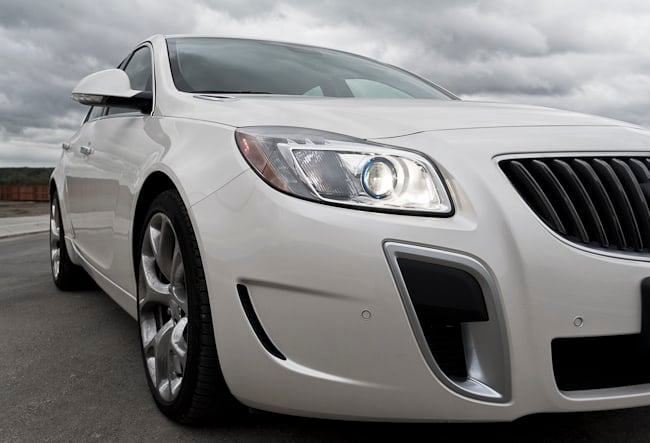 Can the 2012 Buick Regal GS attract the younger buyers the American brand is yearning for?

Starting at $42,345 MSRP CDN for the top-end Regal GS, this sports sedan is certainly worth the price but may deter the younger market from forking out over $40K for a Buick—an established brand not all of Generation-X may be totally aware of. And of those who do, likely associate the Buick brand with their dad or grandpa. Herein lies the marketing dilemma, but if people can get over this brand stigma, they’d realize that Buick remains an opulent product, and the company is producing some great vehicles like this 2012 Buick Regal GS. The Koreans have successfully transformed their young, fledgling brand into a respected product in Kia. Thus, Buick can certainly turn things around as well, though it may take longer if the more youthful demo is unwilling to open up. Under the hood, the 2012 Buick Regal GS finds a 2.0L, 4-cyclinder engine with a High Output turbo. The trim below the top-end Regal GS is the Regal Turbo Sport starting at $38,285 MSRP CDN, and while it also finds the 2.0L turbo engine, the GM-Buick team added larger exhaust outlets, jacked up turbo boost, and reduced the backpressure of the higher output Regal GS turbo engine. Though I never compared the two, I can unofficially and comfortably attest this Regal GS turbo is in a league of it’s own, producing a gracious 270-hp and 295 lb.ft. of torque.

Even cooler, this luxury sedan comes fitted with a 6-speed manual transmission. That’s correct: no lazy automatic, no gimmicky paddle-shifters. Just a buttery and responsive 6-speed manual stick-shift. Hence, no granddads allowed. Unless you enjoy throwing a sports sedan on the track, rolling on these huge, 20-inch, 5 twin-spoke rims for an extra $270 (standard wheels still an impressive 19-inch, 5-spoke).

Behind the wheel, the driver finds a power, hydraulic variable effort, sport steering setup, separating the Buick Regal GS from the less sporty Regal ensemble. For me, personally, and on most days, there’s nothing more gratifying in a vehicle than the art of properly marrying luxury and sport—feeling confident in a vehicle that exudes class and style yet opens up like a refined, unleashed dragon on the open roads; hugging the corners at higher speeds in total comfort, backed by a 270-hp turbo engine. The 2012 Buick Regal certainly attains all this. Grandpa would be proud (or maybe not). Nevertheless, this Regal GS flavour is Buick’s fasted production vehicle yet.

…there’s nothing more gratifying in a vehicle than the art of properly marrying luxury and sport—feeling confident in a vehicle that exudes class and style yet opens up like a refined, unleashed dragon on the open roads; hugging the corners at higher speeds in total comfort Traveling Europeans may confuse the 2012 Buick Regal GS with the Opel Insignia sedan sold in their region, of which the Regal GS was designed after. This bodes well for Buick, because hey, lets be honest, our friends across the pond are blessed with more style than us vanilla folk.

Optional on this Regal GS is the $995 premium paint charge. Standard exterior features include body colour rocker extensions; front fascia with the integrated cooling ducts; rear fascia with dual integrated exhaust outlets; and a decklid rear spoiler. This list goes on with other notable standards including grille in smoked chrome along with door handles in body colour with chrome inserts.

Overall, the Regal GS looks beefy yet refined and super-sporty…a difficult feat for American automakers these days, but one Buick as successfully pulled off with this 2012 Regal GS offering.

From the curb, the Regal GS, especially in this White Diamond tri-coat paint scheme, truly is stunning. Front to back, the sedan is well proportioned; the front and rear designs are each bold yet they work together. The classic front grille in smoked chrome is subtle, flanked by the huge, sporty insets on either side, which may not be for everyone, but I find it totally works. Whereas the front fascia exudes elegant-brash, the rear is equally as intrepid yet refined and classic with clean lines running left to right.

Overall, the Regal GS looks beefy yet refined and super-sporty…a difficult feat for American automakers these days, but one Buick has successfully pulled off with this 2012 Regal GS offering. First impressions of the cabin include refinement, luxury, and total comfort…and that 6-speed shifter adds the exclamation point! The tight cabin curvatures serve as the cockpit of a sports car, while the luxury appointments coupled with the fit and finish are all comfort and elegance. Throw in the GS embroidered floor mats, GS front bucket sport seats, sport alloy pedals, and you quickly realize behind the 3-spoke, leather flat bottom sport wheel you’re not in an old-time Buick, but rather a sports sedan with ample power, torque and enhanced handling.

The list of standards found within the 2012 Buick Regal GS is lengthy, but a few available comfort and convenience packages found on this press car include the Canadian Comfort package, the Convenience package, and the Leather package. Grouped together, some key features in these packages include dual-zone auto climate control with driver/passenger controls, rear seat air ducts, EZ Key passive entry, a 120 volt/3-prong outlet, leather seats with heated front 8-way power passenger and 4-way passenger power lumbar. A Harman/kardon 9-speaker audio system and SirisuXM Radio come standard, but $995 extra (as per this press Regal GS) will add a nice navigation/audio system including the SiriusXM, MP3/CD/USB, iPod integration support, an SD card reader in centre console, GPS, and a 7-inch colour touch screen display.