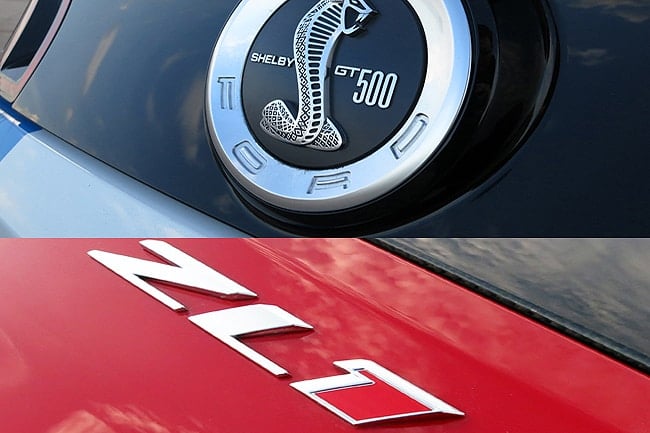 If you are a fan American muscle cars then you are probably well aware of the fact that we are living in a pretty special period of time, as the domestic auto makers have been involved in a four-wheeled arms race for the better part of a decade.

I have no doubt that 2013 will be marked as a significant year in the annals of muscle car folklore as two cars that can only be categorized as “ultra” muscle cars roll into showrooms as Ford and Chevrolet continue their battle for supremacy in this sector.  Chevrolet has created the ultimate Camaro in the form of the 2013 Camaro ZL1, and Ford has countered with the second generation of its Shelby GT500. When Ford reworked the Mustang for the 2005 model year it proved an immediate hit as customers clambered to the dealerships seeking to put one of the retro coupes in their driveway. The car’s styling cues brought back memories of the sleek fastbacks that made the Mustang the car to have in the late 1960’s and early 1970’s, and the rumble of a big V-8 engine helped sales personnel separate shoppers from their money.

Ford quickly followed up on this success by unleashing a beast of a car the following year in the form of the Shelby GT500. The car featured unique body enhancements and a host of performance equipment in an attempt to attract the enthusiast buyer and give the company a much needed media darling to help rekindle America’s love affair with Ford. The GT500 featured a 5.4-litre supercharged V-8 engine which generated 500 horsepower and 480 lb-ft of torque, a Tremec 6-speed manual transmission, sport suspension, and  18 inch wheels. The model has been mildly updated each year since its introduction but sales were starting to fall off as the car started to look dated.

Well for 2013 Ford has given the Shelby GT500 platform a complete make-over and the end result is a truly remarkable machine. The overall look is a little more refined as the car features aerodynamic tweaks similar to those that first debuted on the 2012 Mustang models, so the front grille and headlight area is narrower and the hood has a more prominent brow. Upon closer inspection you will notice that the majority of the grille itself is MIA as the car’s engine  needed better air flow to promote cooling. High-intensity halogen headlights help illuminate the path ahead while the car’s tapered tail now features LED taillights and a much smaller spoiler than that of the previous model. One look at the car’s bulging hood (complete with functioning heat extractors), enormous SVT wheels  and bold Le Mans racing stripes lets you know that this car is all business, and not just curb candy like so many of its rivals. In fact, the engineering team at SVT worked diligently to ensure that the Shelby GT500 car has proper down-force for optimum performance at all speeds. The end result is that the GT500 now sports a sleeker body and the under carriage has been designed to help direct air flow in a manner that reduces drag, maximizes down-force, and improves cooling.

While the new styling and improved interior will spark some interest in the new model, it is what resides under the hood of this car that will prove the real draw. The aluminum 5.8-litre supercharged V8 produces 662 horsepower and 631 lb.-ft. of torque; enough power to allow Ford to claim it to be the most powerful production V8 engine in the world. Mechanical magic in the form of twin fuel pumps, massive fuel injectors and a host of tweaks to aid cooling help bless this car with the ability to romp to over 200 mph.  Luckily enormous disc brakes engineered by Brembo  are on board to reign this stallion in.

Upon closer inspection you will notice that the majority of the grille itself is MIA as the car’s engine  needed better air flow to promote cooling.

The car itself delivers a visceral driving experience that is just at home on the sticky asphalt of a drag-strip as it is carving apexes on a twisty road course. The product planners at Ford are well aware that the typical buyer of these cars is an enthusiast driver with a tendency to seek out opportunities to test the car’s true performance capabilities. As a result, the car’s components have been carefully selected and tested for duty and have proven robust enough to hold up to extended abuse.  The rugged Tremec 6-speed manual transmission is a pleasure to row through once the gearbox is broken in, and the race-bred clutch requires a heavy foot to engage. Not to be outdone by its long-time rival Ford, Chevrolet recently released the 2013 Chevrolet Camaro ZL1. This car represents the pinnacle for Camaro performance and it has been designed  in an effort to  give Chevrolet fans something to brag about. Under the hood is the company’s LSA V8. This 6.2-litre engine generates 580 horsepower and 560 lb-ft of torque, and the subtle whine from its big belt-driven supercharger really tickles the ears.

The car looks much more aggressive than a Camaro SS due to the presence of a massive plateau on the hood, revised front valance complete with a chin spoiler, and a four-pack of air intakes housed in a carbon-fibre insert. The car is given a wide-body stance worthy of a Hot Wheels toy as flared fenders and aggressive bodywork along its flanks hint at the car’s performance potential. Massive, blacked-out wheels, bold striping and a rear spoiler add to the motorsport costume. The interior is similar to that in a garden variety SS, so taller individuals will still find visibility at intersections an issue.

The LSA engine is less powerful than that in the GT500, and it is obvious that the design team worked hard to ensure that the average adult would be able to operate the clutch and transmission with relative ease. In short, the car is much more user friendly.  Quieter too. But does that mean it is less of a car when compared to the Shelby? I don’t think so. It’s just different. On the track I felt more comfortable and confident behind the wheel of the Camaro than I did in the Shelby, but we were under tight time constraints so seat time was at a premium. The Camaro’s rear independent rear suspension and Magnetic Ride Control system helped the car feel more planted when cornering which made me comfortable enough to push it a little harder around the track. The ease of operation also put me more at ease when stuck in traffic performing the clutch pedal dance. I suspect that on a twisty road course the Camaro ZL1 would prove victorious more often than nought but the Shelby would claw its way back to your bumper on long straights. Over a quarter mile on a drag strip however, the prodigious power of the Shelby GT500 would turn the tides in the favour of the muscular Ford. Like the Ford, the Camaro ZL1 also sports massive disc brakes engineered by Brembo.

Both of these cars offer the buyer super car performance at a budget purchase price when compared to cars of similar potential, but any savings will be gobbled up by traffic fines and the need to keep these monsters in both rubber and premium fuel.  After spending a brief period of time at the wheel of both of these cars on a handling track I have to admit that they are just as intimidating as they are exhilarating to drive.

While both cars have been designed to be civil enough to operate as daily drivers,  I can’t stress enough how important it will be for the lucky owners of these automobiles to sharpen their driving skills and learn to rely on the full array of their senses when behind the wheel, as both of these cars have enough horsepower to overcome the grip of the tires and neutralize the traction control systems in short order.

Do I want one? Yes. Would it be easy to choose one over the other? No, as they offer much different driving experiences and excel in different departments. Of course if you are a dedicated fan of either brand the choice will be easy, but if you are just shopping for a new toy, I suggest you negotiate for some seat time in each car before you make a decision.

Russell Purcellhttps://www.flickr.com/people/autoexposurecanada/
Russell Purcell is an award-winning automotive journalist and photographer based in Vancouver, B.C. His passion for automobiles was sparked at the tender age of six, when a family friend gave the wide-eyed first grader a ride to school in a track prepared Porsche 911 RSR. He continues to fan the flames by building an impressive library of automotive related books as well as a vast collection of interesting automobilia and motoring artefacts. Russell is a member of the Automobile Journalists Association of Canada, and is active on Twitter as RoadTestRuss.
FILED UNDER:
ChevroletChevrolet CamaroCar ReviewsChevrolet ReviewsFordFord MustangFord ReviewsFord Mustang Reviews

Chevy’s new 2021 Trailblazer will bolster its offering in the small-SUV segment when it arrives late spring. But does the interior stack up to the hype?
Read more
Ford Mustang

The 2019 Blazer sports a bold look but what's the interior like? How's the cargo space, how much tech is there, and is it comfortable? Here's a closer look.
Read more
Ford Mustang

Specs are out for most powerful street-legal Ford ever

The most power-dense supercharged production V8 engine in the world, the 2020 Mustang Shelby GT500 is the most powerful street-legal Ford ever with 760-hp.
Read more
Ford Ranger

Does the new Ford Ranger stack up to the mid-size pickup competition? We review the top-end Lariat (above XL & XLT) with the optional FX4 Off-Road Package.
Read more
Chevrolet Blazer

What's the difference between the Fusion Hybrid and Energi? Is the 2019 Fusion Energi worth it? We review Ford's sleek plug-in hybrid (PHEV) sedan.
Read more
Ford Escape

Track-Ready: 4 major updates to the high performance variant of the...

The lighter, stronger 2016 Camaro SS was the most powerful model