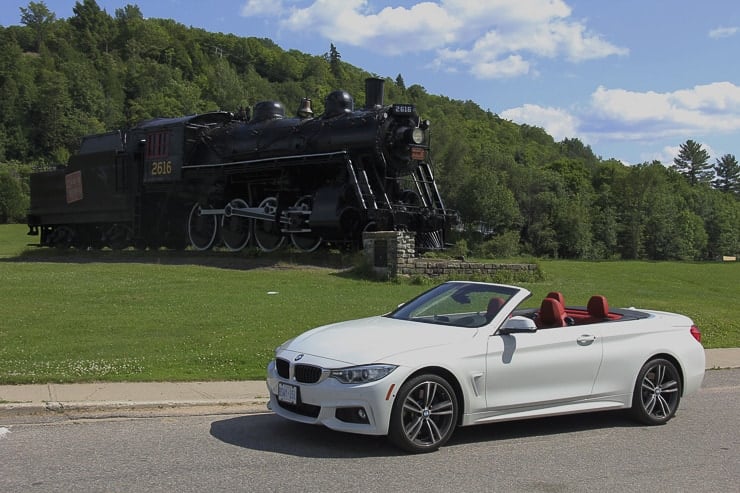 We got topless behind the wheel of a new BMW 435i Convertible to explore Ontario’s Highlands – the province’s best kept secret.

As much fun as it is to live in the city, sometimes you just need to escape the madness. Some of my favourite trips have been ones that transpired when I didn’t have an ultimate destination or itinerary in mind, merely a bout of wanderlust urging me to explore the horizon. One such recent excursion was mostly sparked by congestion caused by the opening of the Toronto Pan Am Games, but also simply the fact that I had a 2015 BMW 435i convertible at my disposal.

The weather upon picking up the Alpine White Bimmer were anything but ideal conditions for a convertible. Despite the cold temperatures and a torrential downpour, the climate controlled interior swathed in Coral Red Dakota leather was quiet and comfortable. Being the owner of several convertibles over the years myself, I am familiar with the usual sacrifices one has to make in order to enjoy those all too rare sunny days and beautiful balmy nights that make their ownership worthwhile. Despite adding weight and reducing trunk space, the folding hardtop insulates the interior well from weather and sound when in place and folds away cleanly out of view when retracted. The availability of xDrive all-wheel-drive capability in the convertible for the first time also increases its utility as a year-round vehicle. Packing little more than the bare essentials, I climbed into the cockpit and pulled up the navigation system where I scrolled through the map to find the highest number of squiggly lines and fewest stoplights within relatively close proximity to the city. Firing up the 3.0L inline six-cylinder engine, I engaged the electronic mechanism that turns this sexy sedan into a drop top within a matter of 20 seconds but exiting the city would prove far more time consuming. Creeping up the Don Valley Parkway at a snail’s pace, an illuminated road sign alerted drivers that two lanes were blocked due to a collision. Sitting in park with the engine shut off, keeping a cool demeanor was no simple task as official Pan Am Games vehicles flew by unabated in the single open thoroughfare – the temporary HOV lane.

Traffic congestion and stoplights slowly diminished along with my blood pressure as I got off Highway 404 at Highway 8, jogged across 8A, to 48, 12N, then 48 again to 35N to Norland where I stopped for a bite at Café Diem, a unique coffee shop that is just on the edge of the area known as Ontario’s Highlands. The region is made up of six unique districts: Comfort Country, Haliburton Highlands, Land O’Lakes, North Hastings Ottawa Valley South and the Upper Ottawa Valley. Presumably carved out of the dense rock formations and vegetation by forestry workers with imagination and foresight, the roads through the region are more than suitably crafted for the handling dynamics of the 435, which were accentuated by the optional M Performance Package which features additional braking capabilities, an adaptive suspension and variable Sport steering. Putting down power to all four 19-inch M Light Alloy wheels through the xDrive variable all-wheel-drive system via an eight-speed Steptronic transmission, (you cannot order this convertible with a manual transmission), the 300hp engine can take on a number of personas depending on which mode the driver engages. Selecting Eco Pro Mode adapts throttle response, gear changes, HVAC controls and start/stop to reduce fuel consumption, while on the contrary scrolling up through Comfort to Sport + Mode will optimize settings for performance and fun. Larger in wheelbase, width and track, the new 4-Series benefits from a 40 percent increase in torsional stiffness and a 40kg weight savings over the outgoing 3-Series. While the trunk isn’t cavernous with the top down, it will accommodate enough space for a couple sets of golf clubs or weekend bags.

With the sun in my face and the wind in my hair, I chose my directions based simply on which roads looked most entertaining to drive. Taking me past colourful, fragrant meadows, scenic lakes and flowing streams, my aimless travels took me to Haliburton where I stopped for lunch and searched for accommodations in the region for the evening. Settling on a family-owned and operated resort just up the road called the Bonne View Inn, I was surprised to discover a lakefront haven that blends traditional charm with modern amenities. The ever-exuberant and hospitable owner Andrea Hagarty started working there as a 19 year-old student and fell in love with the place, returning every summer in between semesters until finally purchasing the place herself and running it with her family. The traditional country resort on Lake Kashagawigamog offers modern lake-view rooms, great food, extremely comfortable beds, floating trampolines, kayak and canoe rentals, a fire pit and a licensed lakeside patio that features live music on weekends. So once the car is parked, they’ve got everything covered that you could possibly need.

The next day once again consisted of smooth, predominantly traffic-free roads that meandered and snaked through wide expanses of scenic landscapes between quaint little townships, each with their own unique flavour and heritage. Unlike the more densely populated areas of southern Ontario, you won’t find constant and ubiquitous eyesores like big box stores, strip malls and franchise chains like Home Depot or Starbucks every 100 metres. What you will find are interesting heritage sites that chronicle the history of each region. The native Algonquin Nation make up a great deal of the Highlands and are known for their harmonious interaction with nature, before the European settlers arrived. Paying homage to the past is an important aspect of the community’s heritage, visually demonstrated by visiting Zurakowski Park – a moving tribute to Avro Arrow test pilot Janusz Zurakowski that features statues, monuments and highlighted by a scaled-down replica of the controversial ill-fated jet.

A surprising amount of cultural diversity is present in the area which harkens back to the settlement days. Who would have guessed that the best Polish cuisine I have eaten in my entire life up to this point would be at the highly recommended Wilno Tavern just outside Barry’s Bay? Speaking with friendly and hospitable locals in each area to find their favourite places to eat, stay and visit was part of the adventure. Arriving after dark at Spectacle Lake Lodge after another full day of exploring, it wasn’t until I awoke the next morning after a restful slumber that we recognized the true beauty of the establishment and its surroundings. The lovely owner Sharon Mahussier does her best to source local ingredients for the kitchen. “I like to help support local farmers but the added benefit is that we are also able to get the freshest milk, meat and produce because it came from our neighbour.” Supporting local businesses as well, her restaurant also offers Muskoka craft beer and coffee from a local aficionado who delivers the beans the same day he roasts them. That’s fresh!

Larger in wheelbase, width and track, the new 4-Series benefits from a 40 percent increase in torsional stiffness and a 40kg weight savings over the outgoing 3-Series. While the trunk isn’t cavernous with the top down, it will accommodate enough space for a couple sets of golf clubs or weekend bags.

From there I headed to Maynooth, down Highway 62 and made a right onto Peterson Road which turned into Elephant Lake Road – a must drive route if you happen to be anywhere near the area. From there I met up with Loop Road and stopped in to Olde Ridge Authentic Barbecue – a classic southern-style smokehouse that is well worth the visit. Owner Bobby Turner has been painstakingly refining his craft for years. Using local ingredients not only means that the freshness is unparalleled, but also that the flavours are catered directly to the Canadian palette rather than traditional southern BBQ. I don’t often throw around such endorsements easily, but the slow smoked, rubbed and sauced ribs were the best I’ve ever had in my life, period. Truly.

With a satisfied stomach, I pointed the bike south down to Gooderham and then continued south on legendary 507 to Flynn’s Corner’s where the gas station there has become a popular staging area for motorcycle riders coming and going from the renowned stretch of road – a good indicator of how enjoyable a road it is to drive. It is common to see bikes and riders of all shapes and sizes coming and going all day long, each sharing their favourite routes and agreeing that this area is a true diamond in the rough.

Boasting a simpler, more relaxed and rustic way of living nearly equal distance from Toronto, Montreal and Ottawa, each unique route connects distinctive small towns with local charm. With a total lack of pretension, people were almost suspiciously friendly and happy to offer directions and suggestions for wining and dining. As the Muskoka and Kawartha regions fill up and become unattainable to those of us without trust funds, the Ontario’s Highlands Region is currently the provinces best kept secret. Considering all of the value it offers to those who discover it, I don’t see it staying that way for long. Dustin Woods
For the better part of a decade Dustin has been contributing automotive, motorcycle, travel and lifestyle content to the likes of The Toronto Star, Robb Report, Motorcycle Mojo, Sun Media, Motorcycle.com, Moto123.com, Inside Motorcycles, HOG magazine, BMW Motorcycle Magazine, Modified Luxury & Exotics and Performance Auto & Sound. His passion for adventure and love of speed has taken him on a journey not for the faint of heart.
FILED UNDER:
BMWBMW 4 SeriesBMW ReviewsBMW 4 Series ReviewsCar ReviewsNew CarsConvertible ReviewsCoupe ReviewsCultureCulture Features

The new Nissan Z car is finally here, but does the Z Proto successfully pay homage to the past? Or butcher the Z's iconic heritage?
Read more
Ford Mustang

COVID-19 pandemic may be halting progress but research & development on the Mustang Mach-E must go on. Here's how 3 Ford engineers are doing it - from home.
Read more
BMW 4 Series

Porsche has just released the eighth generation of its venerable 911. We put the 443-horsepower 2020 Porsche Carrera S Cabriolet to the test - in winter.
Read more
BMW X Series

Not only is the 3rd-generation X5M the most energetic yet, but it's also just wicked fun. Our full review of BMW's redesigned performance SUV for 2020.
Read more
Mercedes-Benz

We hit a frozen Winnipeg lake behind the wheel of the brand's most powerful sedans & wagons. Here's a closer look at Mercedes-AMG's winter drive program.
Read more
Coupe Reviews

The 3 Series was completely redesigned for 2020, representing the 7th-generation of this premium compact sedan. So, what's the 382-hp M340i like?
Read more
Hyundai

The N brand launched in Europe with the i30 hatchback and comes to North America with the mechanically similar Veloster N, now in its 2nd-generation.
Read more