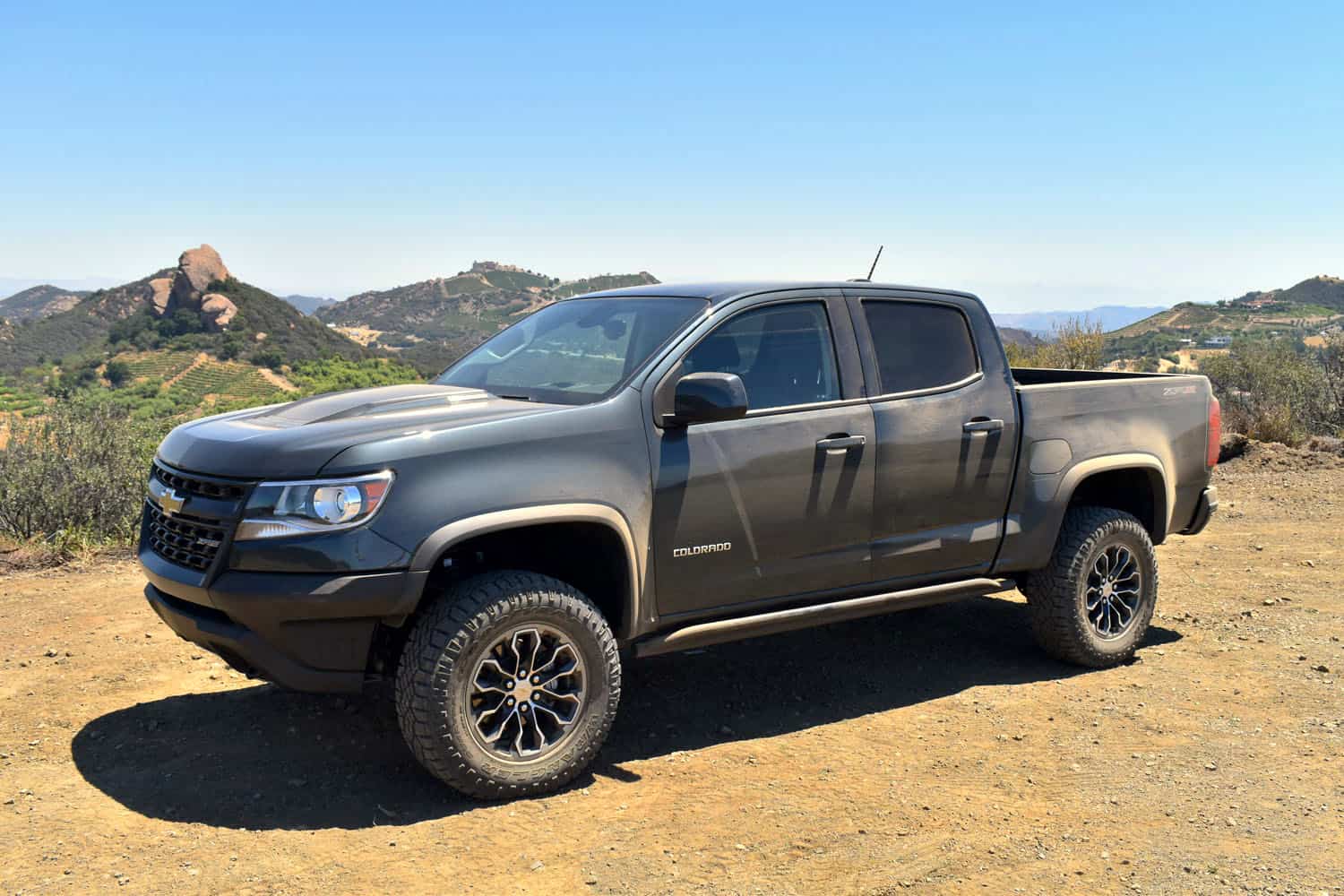 Specialized off-road truck bridges the gap between rock crawling and desert racing, but you could still commute in it.

Los Angeles, California – Chevrolet broke new ground in the North American market last year when it added a 2.8-liter Duramax diesel option to the mid-size Colorado pick-up truck, but has been rewarded with strong sales. Now the Colorado range has been extended further with a specialized off-road derivative – the ZR2.

The new model starts at US$42,620 with a 3.6-liter, 308-horsepower V6 gasoline engine and extended cab/long bed; an equivalent Z71 is around US$36,775. Also available is the torquey Duramax and a crew cab/short bed configuration; both options featured on our test vehicle, which came in at US$47,060 including US$1,000-worth of premium Bose audio system and Chevrolet MyLink infotainment with GPS and 8-inch touchscreen.

A unique grille and hood combination sets the ZR2 apart from regular Colorados and gives the truck an aftermarket off-road look. Further styling changes front and rear improve off-road performance. The standard corner-step bumpers are gone in favor of a cutaway design that increases approach and departure angles.

The former is now 30-degrees; a corresponding Z71 manages 17.5-degrees with air dam, or 25-degrees without. Scallops ahead of the front wheels open up the face of the tires for rock crawling.

The ride height is raised 2 inches from the standard truck, which combines with the new front end to noticeably change the Colorado’s stance. The overall effect is a much a more purposeful machine than normal, but the ZR2 has plenty of technical enhancements with which to make good on its intentions. Yes, you read that right. The ZR2 is the first truck to feature Multimatic’s DSSV spool-valve shock technology, which was originally developed for open-wheel race cars and is also fitted to the ultra-exotic Aston Martin One-77 and the Ford GT. The fitment came about because the same Chevy Performance team that adapted DSSVs for the Camaro Z28, also developed the ZR2’s chassis.

So why are these spool-valve shocks a good idea on an off-road truck? Chevy claims that the ability to tune separate valves for compression and rebound provides a greater breadth of performance, on- and off-road. The ZR2 should be equally comfortable bombing across the desert as it is on public roads. In addition, the spool-valve concept is said to be more resistant to heat-fade than a regular shim-stack shock, so damping performance shouldn’t tail off after prolonged, heavy use.

Chevy would like you to think that the ZR2 will rock-crawl like a Jeep Wrangler and eat up deserts like a Ford F-150 Raptor, but still be comfortable on the daily commute. I can’t substantiate those claims, but there’s no question that this is a highly capable off-road machine that wouldn’t be a pain to drive on-road every day.

This passive setup (no adaptive damping here) also incorporates position-sensitive damping, which brings a third set of valves into play as you reach the extremes of wheel travel in compression or rebound, to stop the wheel topping- or bottoming-out aggressively.

And for ZR2 towing duties and keep track of what’s behind you technology such as the rear camera makes driving and hauling that much easier, while avoiding those pickup truck blind spots.

Other chassis changes include a 3.5-inch wider track with a corresponding increase in wheel travel – up to 8.6 inches from 7.5 at the front and to 10 inches from 9 at the rear. Cast-iron control arms replace the stamped steel ones to counter potential damage from impact loads.

Also helping to toughen up the running gear are skid plates to protect the radiator, oil pan and front diff, and rock sliders that will support the 4,985 lb weight of the truck (about 164 lb more than a comparable Z71).

My test drive didn’t extend to high-speed off-road running, but I did take the ZR2 on a challenging, low-speed off-road course in the hills around Malibu. The diesel Colorado, which comes with a 6-speed auto ’box and offers up to 550 miles of range, had more than enough capability for this steep, rocky, narrow and dusty route. Three 4WD modes are available: a standard setting that constantly varies the torque front-rear, plus 4WD-High and -Low settings that lock the center diff.

When the going gets really tough, you can also lock the front and rear diffs; naturally that’ll make the turning circle even worse, but it’ll probably get you up any slope you put in front of the ZR2, without resorting to a winch. It’s the only truck in the class with an electronically locking front differential.

When you come down the other side, hill descent control is available for drivers who prefer to let the machine take over. The speed of descent is adjustable in 0.5mph increments using the cruise control ± buttons.

The ZR2 rode much better over the rocks than some other vehicles I tried on the same route, but that softness doesn’t extend to road running, where the truck feels surprisingly composed and doesn’t wallow or wander around, even in the twisty stuff. That’ll be the expensive shocks working their magic. It’s still a truck, though, and a specialized off-road one at that, so there’s some wind noise from the big mirrors, engine noise from the diesel and tire noise from the 265/65 R17 Goodyear Wrangler Duratrac off-road tires.

The ZR2’s standard leather seats and high-end infotainment options suggest that Chevrolet isn’t expecting all ZR2 owners to spend their time off-road. They are however appropriate to a US$47,000 mid-size truck.

Overall, the cabin still has a utilitarian feel (more so if you delete the carpets, a no-cost option), albeit peppered with some of the latest in-car tech: wireless phone charging, Apple CarPlay and Android Auto, OnStar 4G LTE with built-in Wi-Fi and a reversing camera.

Chevy would like you to think that the ZR2 will rock-crawl like a Jeep Wrangler and eat up deserts like a Ford F-150 Raptor, but still be comfortable on the daily commute. I can’t substantiate those claims, but there’s no question that this is a highly capable off-road machine that wouldn’t be a pain to drive on-road every day. Best in the Desert racer, Chad Hall is currently preparing a ZR2 for racing, so we might find out soon whether it lives up to the hype.

The Raptor is bigger, heavier, more powerful and more expensive than the ZR2; the Wrangler is smaller, lighter, cheaper and less versatile. The Tacoma TRD Pro is in the same ballpark as Chevy’s newcomer, size- and price-wise, but there’s no diesel option or locking front diff. Chevy claim the Colorado’s in a class of one. Maybe they’re right. 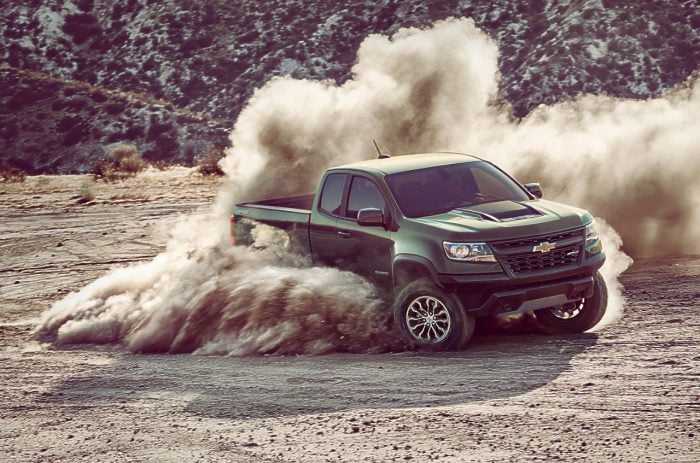 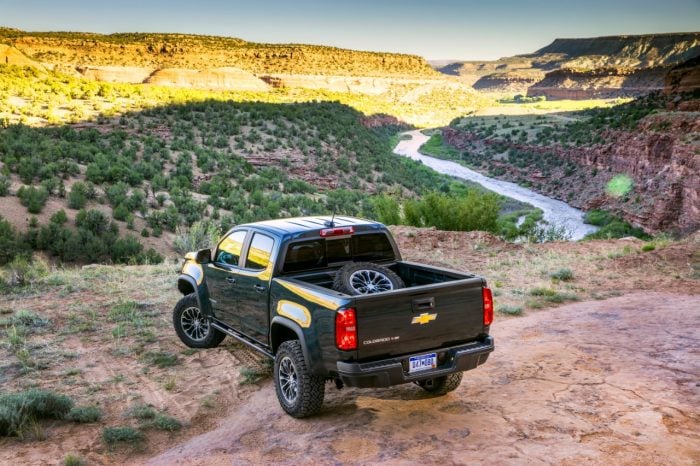 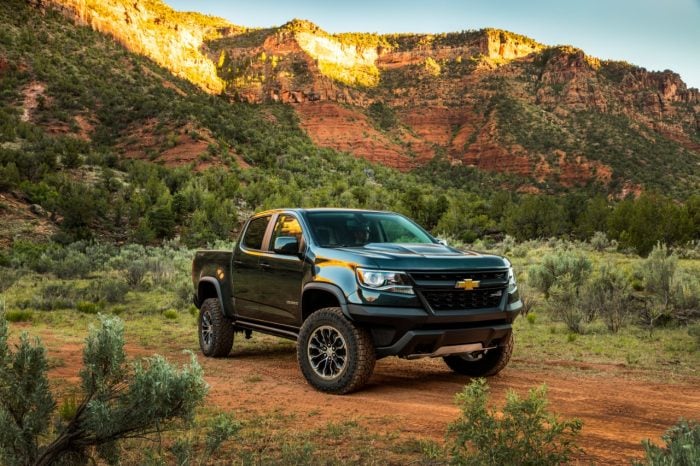 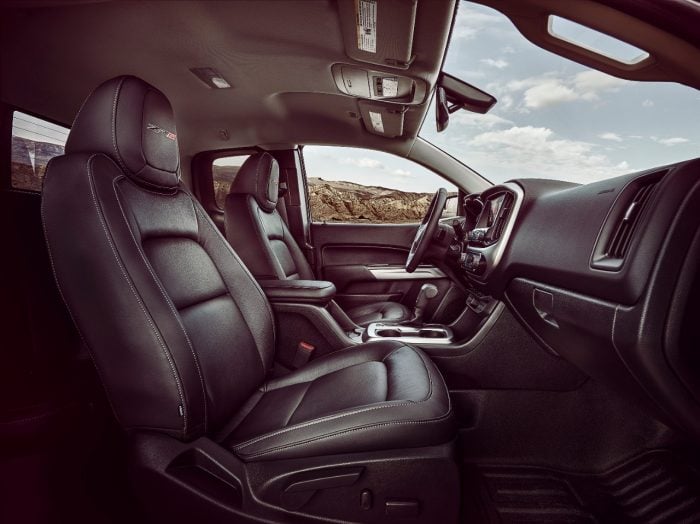 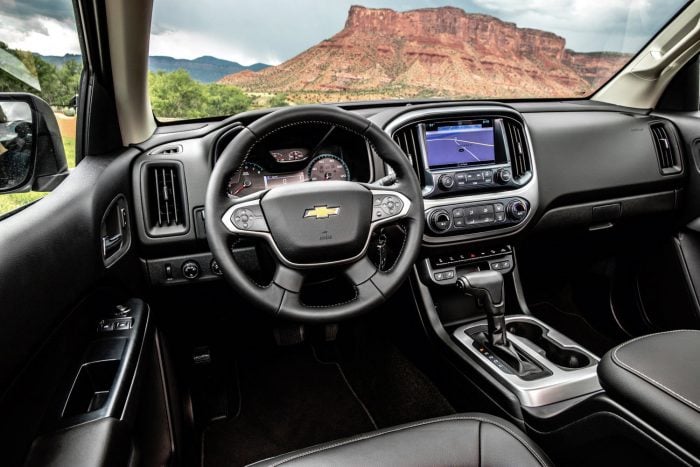 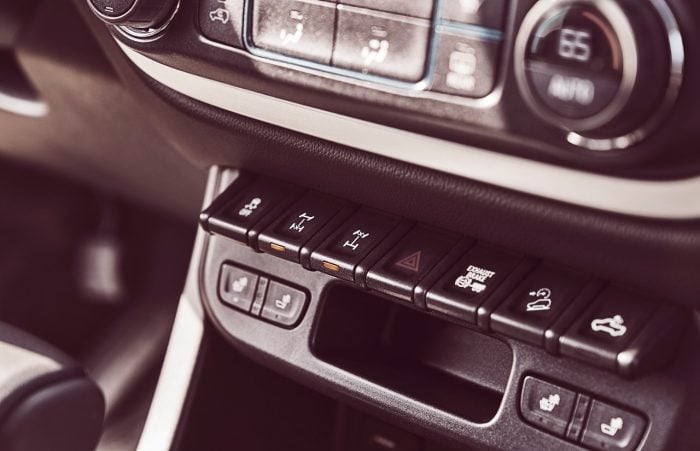 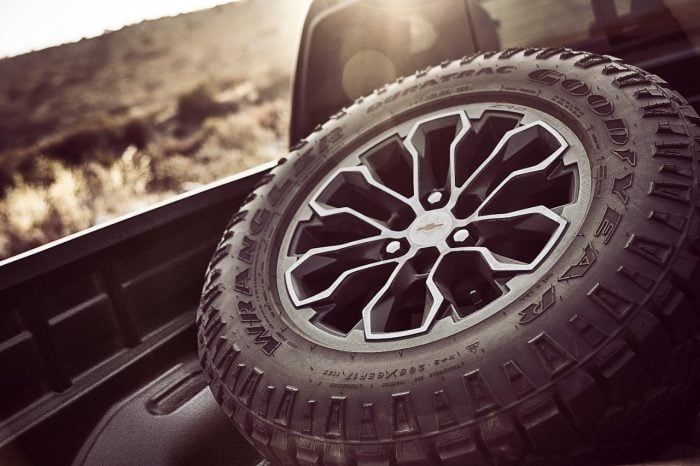 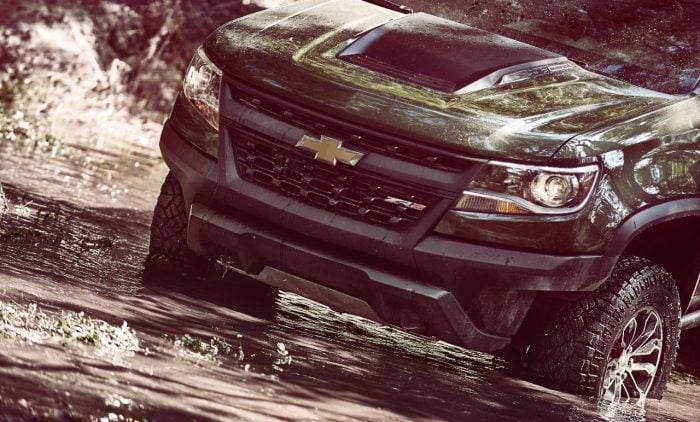 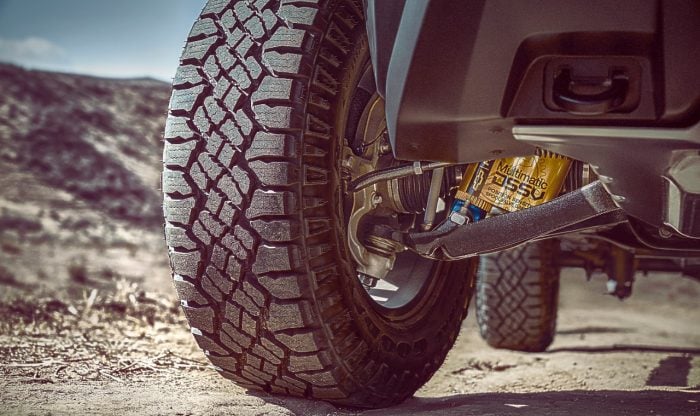 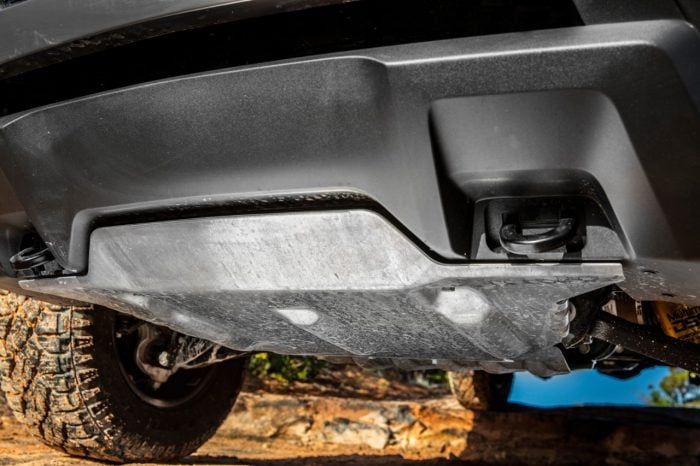 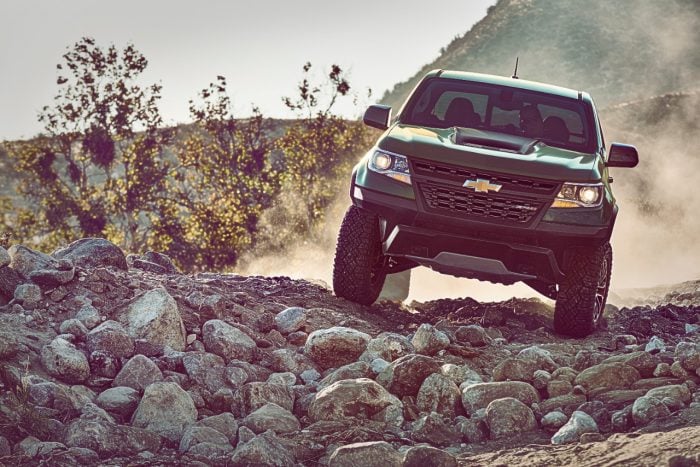 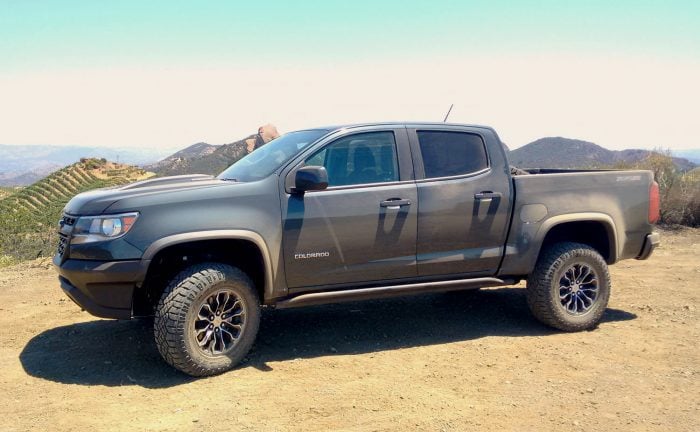 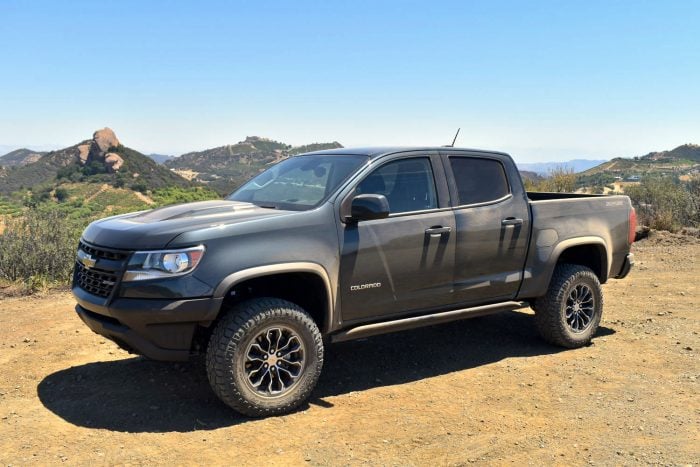 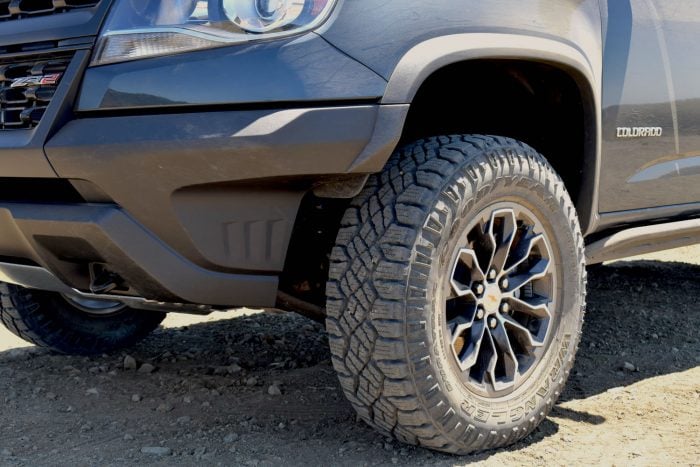 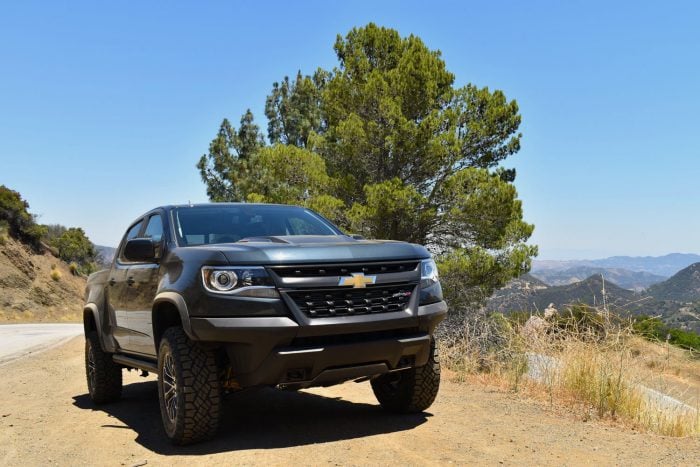 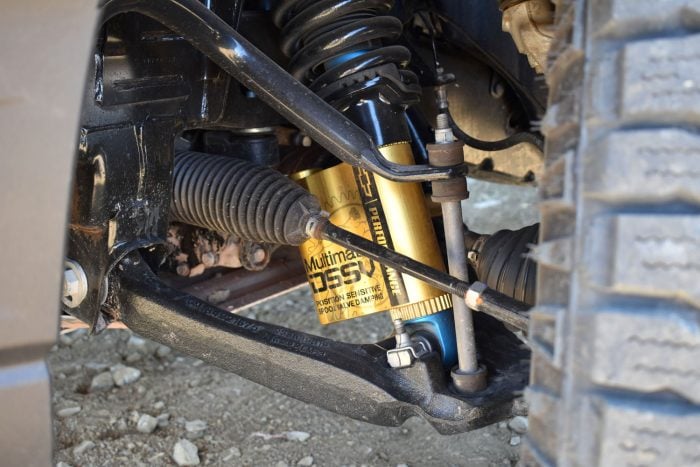 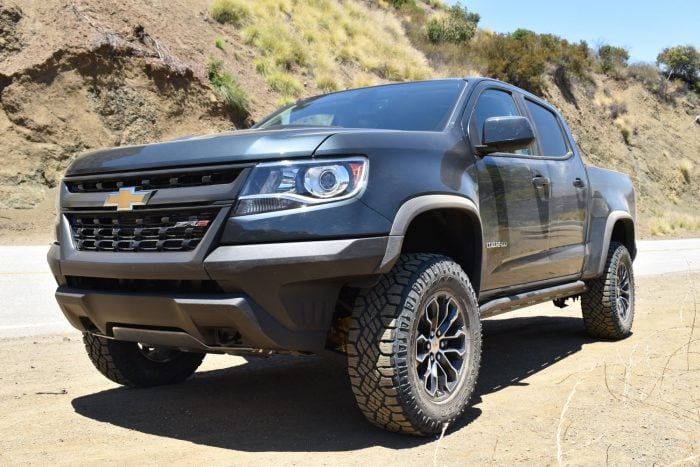 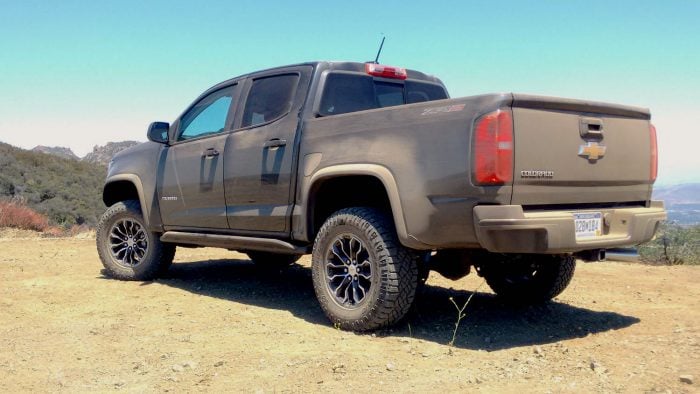 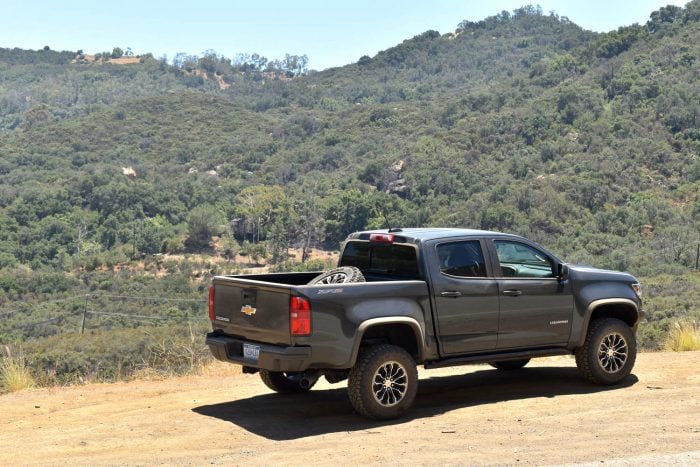 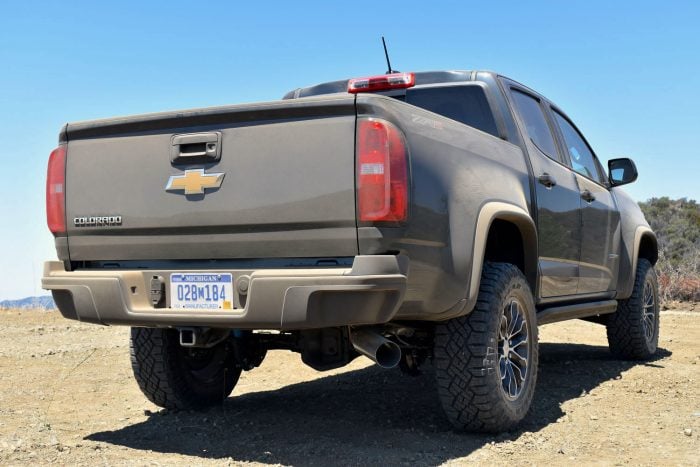 Life in the city with the all-black monster that is the 2020 Chevy Silverado Trail Boss with the Midnight Edition package. Our full review.
Read more
Truck Reviews

Shopping for a compact pickup truck? We highlight all the top mid-size trucks on the market today, including Colorado, Gladiator, Tacoma, Ranger and more.
Read more
Toyota Tacoma

The next-generation 2021 Ford F-150 may not look much different than its predecessor, but offers precisely what pickup truck buyers now need.
Read more
Toyota Tacoma