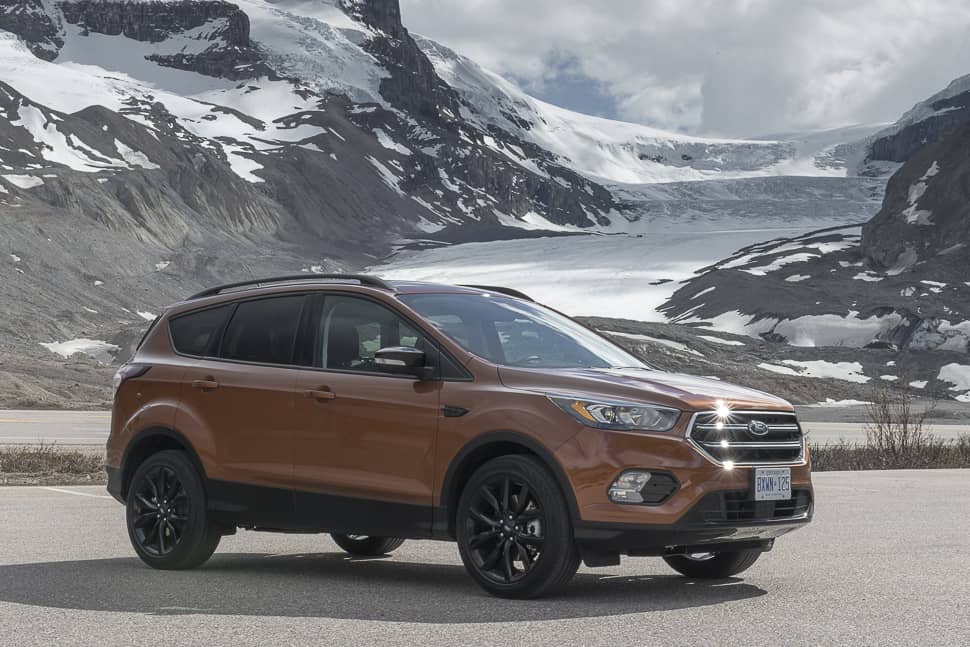 We spend time with the updated 2017 Ford Escape on a two-day road trip through the majestic Rockies to Jasper National Park in Alberta.

What better way to spend seat time with new 2017 Ford Escape Titanium – with updated design cues and more tech – than a drive through the mountains on fun, twisty roads.

When Ford first introduced the compact Escape back in 2000, the small SUV segment accounted for only 18% of the industry, making way for its gas-guzzling, behemoth counterparts popular at the time. Fast forward to today, the compact utilities are dominating the market fuelled by cash-flush Millennials (yes, they have money) and Boomers (…whom the Millennials recently passed in numbers). Add, the automakers’ unrelenting push to produce them, and we’ve got a fairly saturated segment of small crossovers, from affordable volume-selling models to luxury. Best part is, consumers have plenty of options now – and that’s always a good thing.

The design receives some welcome tweaks for 2017 including a more rugged front and rear appearance – now more inline with the larger, sleeker Ford Edge. The headlights and taillights are restyled; the SE and topline Titanium models (seen here) now come with an optional Sport Appearance package; plus, new wheel options.

Inside, the 2017 Escape retains that progressive look but now includes more storage capacity for things like cell phones – overall, better usability lacking in the outgoing model. Other changes include a redesigned centre-console; a new gear shifter location; and an electronic e-brake replacing the manual, old-school version.

The cabin is also quieter (Ford claims the new Escape is the quietest CUV in the segment).

These days, you can’t have a refresh without the latest technology and connectivity, and loads of it. The 2017 Escape includes nearly a dozen hardware upgrades; gone is the Ford MyTouch, replaced by the new, faster Sync3 with the Sync Connect app, allowing driver to lock/unlock, locate, and start the engine, amongst other things, using a smartphone.

Two new EcoBoost engines are now offered with the Escape, including a 1.5-litre and a twin scroll 2.0-litre. The EcoBoosts come with the new Auto Start/Stop, shutting the engine off when sitting idle – a great, handy addition that helps boost efficiency.

The new iteration of the Escape is a good one, with a nice design refresh, more cargo and capacity in the cabin, new EcoBoost engines with the standard auto start/stop (SE and Titanium models), and more technology and connectivity for both driver and passengers. It’s no surprise the popular Escape has been Ford’s second-best selling vehicle in Canada (followed by the F-150 pickup). From Millennials to Boomers to small families, the 2017 Escape has grown into a well-rounded compact crossover that’ll certainly appeal to wide group of consumers. From grocery runs to road trips.

For more info on the refreshed 2017 Ford Escape visit here.

Things to see and do in Jasper National Park:

Jeep teams up with Colorado-based bike builder QuietKat on what the automaker claims is “the most capable off-road electric mountain bike there is.” Is it?
Read more

The 2020 Ford Bronco Concept We Wish Were Real