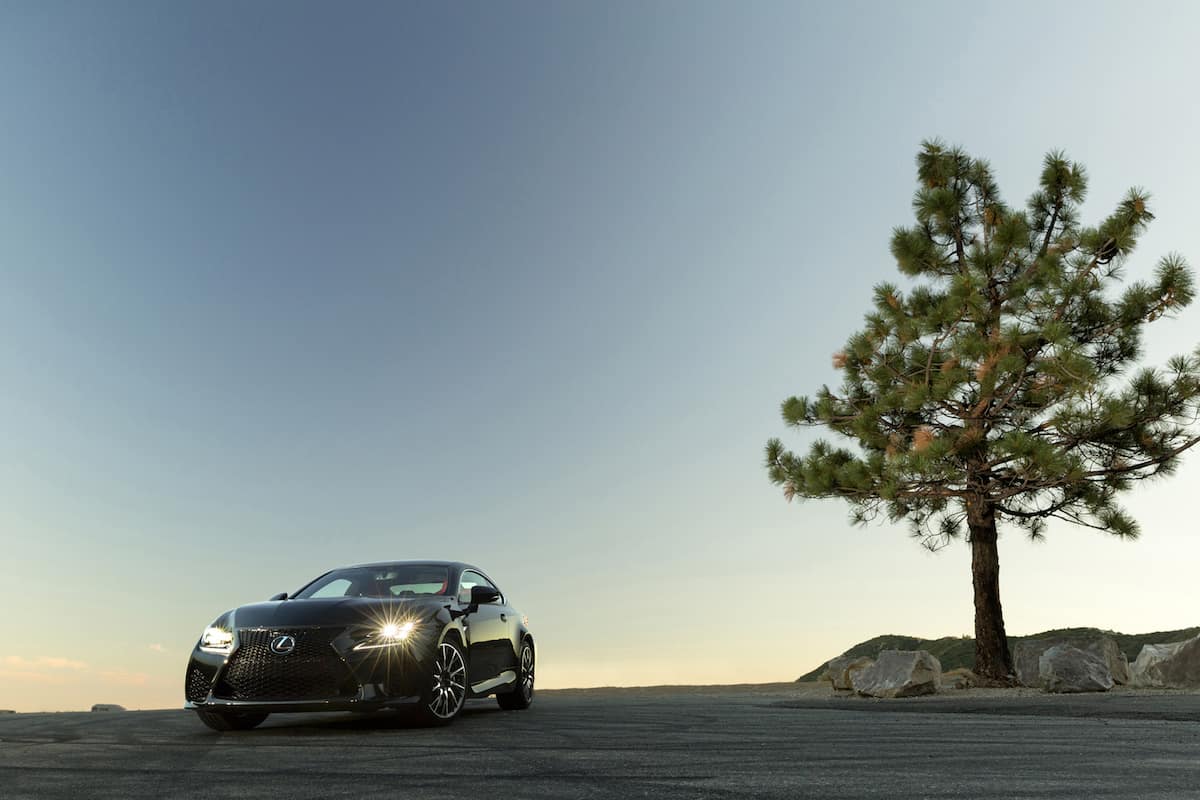 No turbos, no electricity, no f–ks given. Just a V8-powered, RWD Japanese coupe. We get behind the wheel of the new 2017 Lexus RC F.

Any car enthusiast can see the trend towards electric-powered vehicles revving up (so to speak). The Lexus RC F is basically an acknowledgment that there’s still a market for a sports car with a big, gas-powered V8 that makes its power without even resorting to the turbocharging many manufacturers now use to create a kinder, gentler fast car.

Based on the RC, which itself is a two-door version of the IS sport sedan, the RC F shoves the base car’s V6 engine aside and replaces it with a 5.0-litre V8 whose 467-hp and 388 lb-ft of torque are fed to the rear wheels, instead of all four as in the less-potent RC 300 and RC 350 versions.

I’ve become accustomed  to the popularity of AWD in all kinds of vehicles, so getting into a car this powerful without the benefit of four-wheel traction requires a driving style recalibration. Even under about half throttle, the RC F’s rear wheels fought for freedom against the car’s stability control system, prompting me to make a mental note to leave that safety net fully engaged in order to keep the blue coupe out of the weeds.

Having felt the tail trying to wag the dog, it was easy to surmise how our test car’s tires had come to be so severely worn on a car with less than 10,000 km on its odometer. Lexus says the RC F’s chassis was tuned on Japan’s renowned Fuji Speedway and the Nurburgring racetrack in Germany, and incorporates a number of features designed to help it excel in closed-course driving. Among those is an active rear spoiler that deploys at 80 km/h to help stabilize the rear end, though you’d have to nearly double that speed to actually need the extra downforce it generates.

As keen as the RC F’s engine seems on running the show, that chassis tuning shone through in the car’s sharp handling, at least to the extent we were willing to explore its abilities on public roads. While you’d expect this to be the one Lexus to get a manual transmission, an eight-speed automatic is the only one available, for which we were actually grateful, as it meant one less thing to worry about when going deep on the accelerator.

In normal and eco drive modes (the latter seeming out of place here), the automatic shifts as early as possible, letting the engine’s low-end torque do the work in everyday driving. Sport and sport-plus modes are a better fit, allowing the engine to reach higher into its rev range, where an adaptive exhaust opens up to produce a fitting soundtrack for enthusiastic acceleration. If you want a bit of control over the powertrain, the transmission has a manual shift mode you can control with steering wheel-mounted paddles.

Even under about half throttle, the RC F’s rear wheels fought for freedom against the car’s stability control system, prompting me to make a mental note to leave that safety net fully engaged in order to keep the blue coupe out of the weeds.

If you’re surprised by the lack of AWD here, there’s precedent for high-powered cars with two driven wheels: The BMW M4 (the coupe version of the M3 sedan) and Mercedes-Benz’s C 63 AMG both funnel their power to the rear axle. Audi’s 450-hp RS5 is in the minority with its standard AWD setup. The RC F’s extroverted exterior styling matches the car’s performance, but an interior design that looks fine in a C$60,000 RC 350 feels mismatched to this high-test model’s C$85,000 price tag. The panel housing the air conditioning and basic radio controls looks tacked on to the centre stack, and the tiny infotainment screen is a letdown compared to the super-sized display in other Lexus models. And in 2017, a higher-resolution backup camera would also be welcome.

You could argue Lexus focused its efforts on the RC F’s function, and the heavily-bolstered front seats (whose standard ventilation function is a nice upscale nod) fit the bill, offering great lateral support, even if they make it so that only slim people will be comfortable squeezing between them.

Despite its big performance, the RC F proved surprisingly easy to live with, thanks to a comfortable enough (but still very firm) ride and an engine tuned to go as easy on gas as a 5.0-litre engine can when it’s not being asked to test the body’s aerodynamics. Our test car averaged about 12.5 L/100 km in a mix of highway and enthusiastic city driving. Also check out all our exclusive Lexus Reviews

This is a US$64,165 / C$85,400 car to start, and ours had the only option available, a performance package that bundles a torque vectoring differential, carbon fibre roof and rear spoiler and painted brake calipers. That short list of kit costs an impressive C$7,700, most of which likely covers the cost of the carbon fibre bits.

The RC F is an impressive performance car whose potential is wasted in daily driving. If you’re okay with giving up 160 horsepower you’ll rarely get a chance to use without breaking the law, the 307-hp RC 350 AWD is a strong performer in its own right, and loses little in terms of visual horsepower.

Still, we’re intrigued by Lexus’s decision to make the RC F something of a Japanese interpretation of the American muscle car. No turbos, no electricity, no f–ks given: just a heck of a lot of power and performance in a bold-looking package. 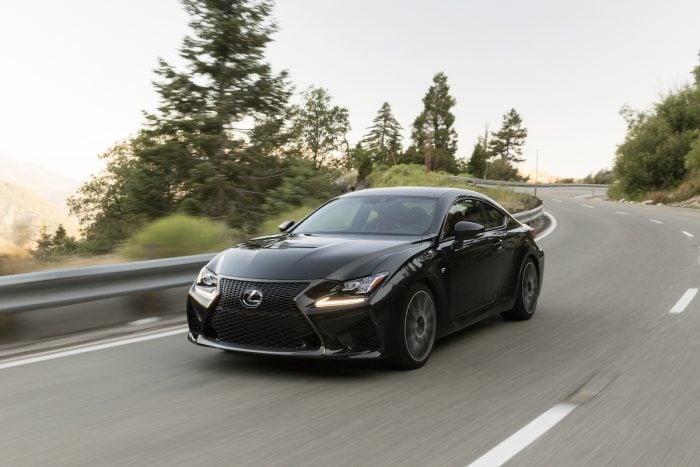 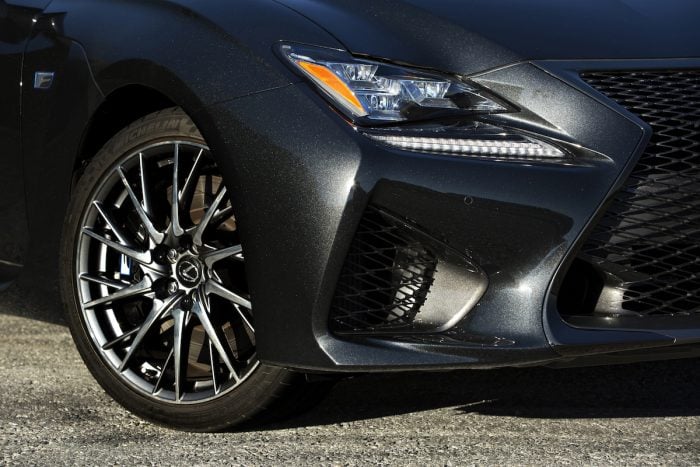 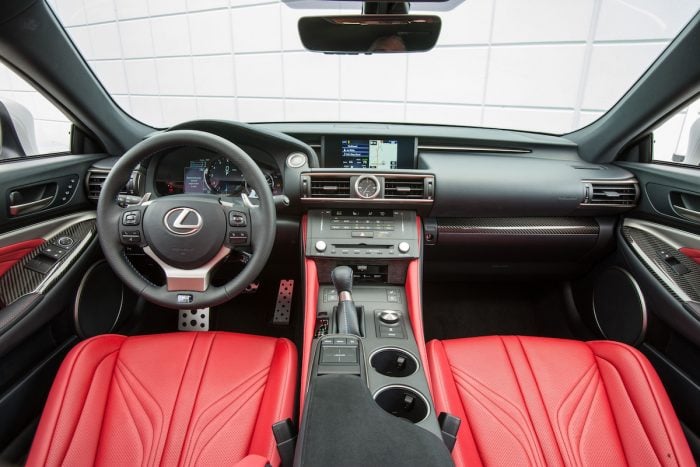 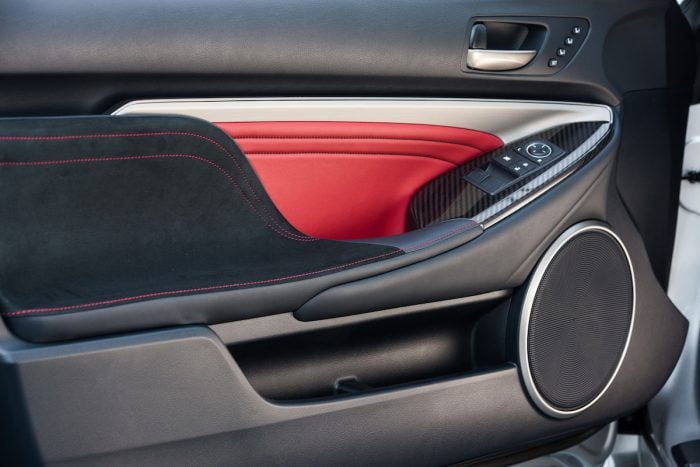 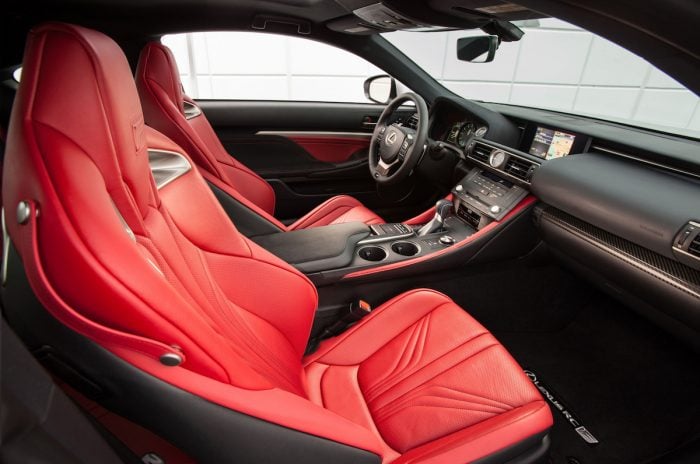 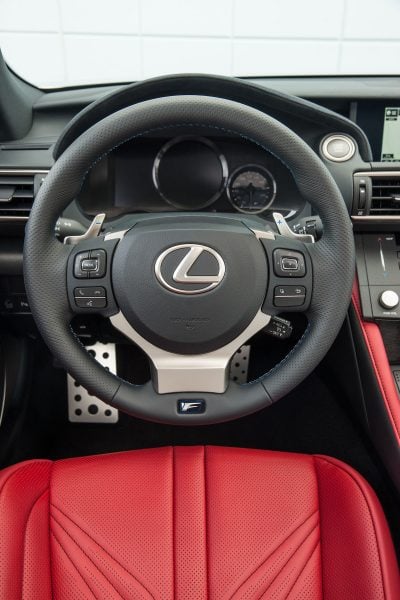 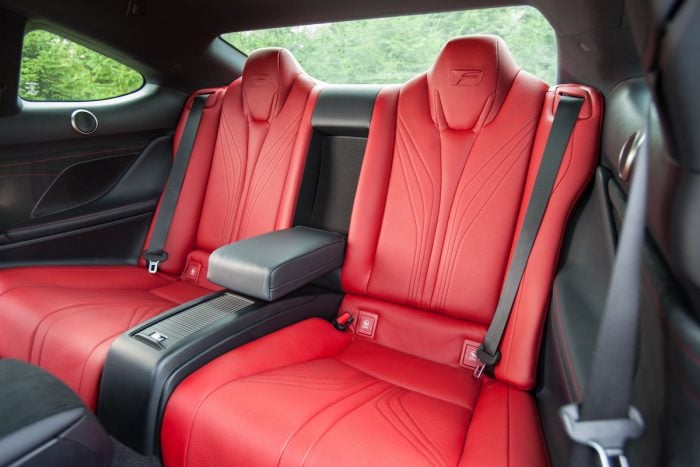 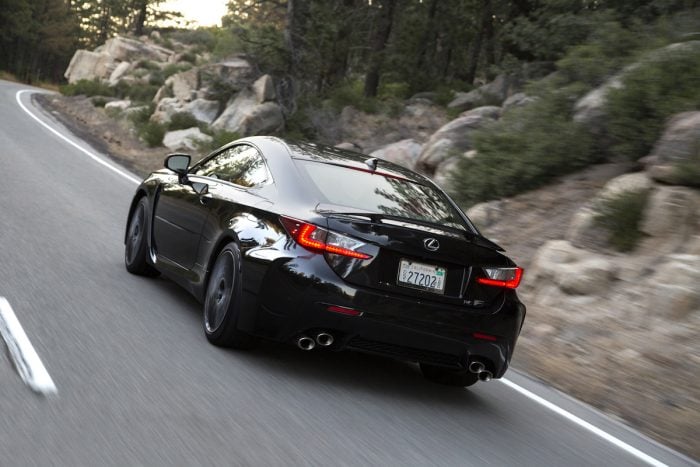 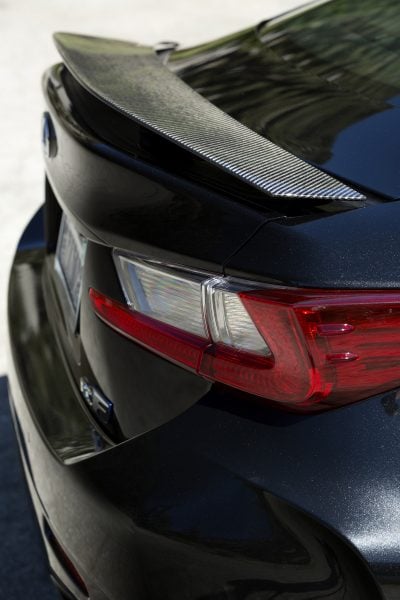 Chris Chasehttps://chrischasescars.com/
Chris has been writing professionally about cars since 2004, in print and online. He lives in Ottawa with his wife and two feline tyrants. In rare quiet moments, he can be found travelling or playing one of his way-too-many guitars. Chris is also a journalist member of the Automobile Journalists Association of Canada (AJAC).
FILED UNDER:
Car ReviewsCoupe ReviewsLexusLexus Reviews

The N brand launched in Europe with the i30 hatchback and comes to North America with the mechanically similar Veloster N, now in its 2nd-generation.
Read more
Lexus

Designed to bring the Lexus brand message and ethos to the masses in a contemporary setting, INTERSECT BY LEXUS opens doors in New York with concept debut.
Read more
Ford Mustang

We review the 2018 Mustang EcoBoost with the 4-cylinder turbo that's more powerful than the GT V8 was 10 years ago. Good enough for hardcore muscle-car fans?
Read more
Lexus

We review Lexus' best-selling sedan. The 2019 ES 350 is priced well compared to German rivals, has more curb appeal than ever, but AWD would be nice.
Read more
Dodge Challenger

For 2018, Jaguar has pushed the F-Type performance envelope into the stratosphere by unleashing the 575-hp F-Type SVR.
Read more
Recreational

Need a new boat? Take a look at this new 65-foot luxury sailer by Lexus — the LY 650 — the 3rd flagship boat from the Japanese automaker, on sale late 2019.
Read more
Mercedes-Benz