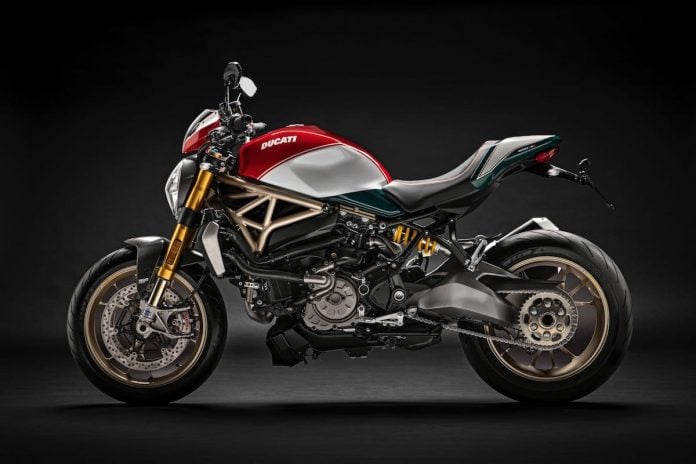 Twenty-five years ago, Whitney Houston’s rendition of “I Will Always Love You” was at the top of the charts and Clint Eastwood’s Unforgiven won the Best Picture at the Academy Awards. It was also the year that the world was gifted with the Ducati Monster, an iconic naked sport bike that launched hundreds of imitators.

To commemorate this occasion, Ducati has introduced the Monster 1200 25° Anniversario. A special edition based on the current model, the run will be limited to only 500 engraved units, with only 100 making their way to North America.

So aside from a fancy name, what else does this special model include for an MSRP of $23,195 Unique Tricolore paint on the nose fairing, fuel tank and passenger seat cover, a 25th Anniversary seat logo which also adorns a custom bike cover. Other unique elements include a gold coloured frame and forged Marchesini wheels with W spokes. Numerous elements have been machined from solid aluminium, including mirrors, frame plugs, handlebar end weights and fuel cap. Articulated brake and clutch levers and plate holder are also aluminium. Carbon Fibre was incorporated into the front and rear mudguards, keyhole cover and the exhaust heat guard.

The Monster 1200 25° Anniversario is equipped with the latest evolution of the Testastretta 11° DS, putting out 147hp at 9,250 rpm. The tubular steel trellis frame, for which the Monster has become famous, is paired with a fully adjustable Öhlins front fork, rear suspension and steering damper. Dustin Woods
For the better part of a decade Dustin has been contributing automotive, motorcycle, travel and lifestyle content to the likes of The Toronto Star, Robb Report, Motorcycle Mojo, Sun Media, Motorcycle.com, Moto123.com, Inside Motorcycles, HOG magazine, BMW Motorcycle Magazine, Modified Luxury & Exotics and Performance Auto & Sound. His passion for adventure and love of speed has taken him on a journey not for the faint of heart.
FILED UNDER:
MotorcyclesDucati

A human-destroying, weaponized machine on two wheels, Skynet's Moto-Terminator (based on a Ducati 1100 S) is just what John Connor needs to fight back.
Read more
Motorcycles

KTM rolls out pricing for their high-performance, lightweight 2019 790 Adventure. At US$12,499, this twin-cylinder travel enduro bike is ready to move.
Read more