Hard to believe this is Ford's first-ever F-150 Diesel. We head to Colorado to test the new 250-hp Power Stroke Diesel-powered pickup. 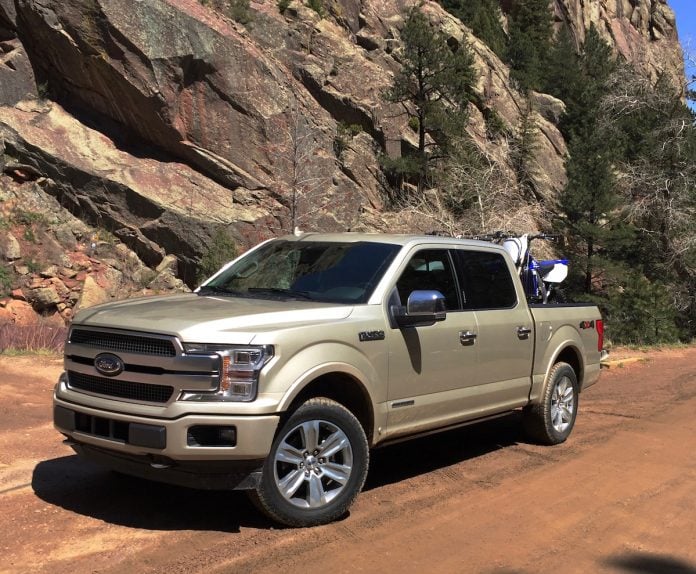 DENVER, CO — With the new diesel engine for the 2018 F-150, Ford has knocked it out of the park, but buyers will pay handsomely for it.

The engine, a 3.0-litre V-6 PowerStroke diesel built in England and installed at the Dearborn (Mich.) truck plant, offers outstanding fuel economy, a stump-pulling 440 pound-feet of torque and a quiet ride that belies its oil-burning ways.

That the diesel’s fuel economy beats the entire rest of the F-150 lineup by a country mile should come as no surprise: diesel engines are inherently more fuel efficient thanks to an ignition cycle that ensures every molecule of fuel inside the cylinder spontaneously combusts under pressure.

The gorilla in the room, however, is price, and it would be unfair to proceed further without mentioning it. First off, for consumers, the diesel is only available on Lariat, King Ranch and Platinum trim levels.

Fleet customers can access the diesel in all trim levels, but if the upgrade is from the 3.3-litre V-6 engine, the price is C$8,200.

There has been such demand for more diesel 1,500-series pickups — currently, the Nissan Titan (reviewed here) and Ram 1500 are the only diesel 1,500s on the road — Ford should have little trouble reaching its five per cent target.

General Motors is introducing a diesel option on the Silverado and Sierra for 2019, but Toyota and Honda (assuming you’re generous enough to include Ridgeline in the conversation) do not offer oil-burners. There is speculation Toyota will offer a Cummins diesel in the future, but nothing is firm.

If you forget about the higher price, consider also the fuel savings are dulled a bit by the use of diesel exhaust fluid, about two $20 containers if you buy it at Canadian Tire, which needs to be refilled about every oil change. You can check your DEF level using a gauge you can call up on the instrument panel.

Interestingly, in tow-haul mode towing the horse trailer, the transmission did not lock out the higher gears — which is typically one of the adjustments tow-haul mode makes. We still got into 10th gear on the highway. It did seem, on hills, the diesel got up to speed without breaking a sweat.

The only thing we didn’t like about towing was how the transmission seemed to be hunting for the right gear. Perhaps locking out higher gears would help that.

You can, says chief program engineer Jerry Farrell, thank a few things for the combination of hauling and fuel economy: first, the diesel trucks come standard with active air shutters, closing off airflow to the radiator when the engine doesn’t need cooling. This improves aerodynamics.

Secondly, the engine, which runs cooler already due to the lower combustion temperatures of diesel, features a mechanical cooling fan with an electronic clutch. This combination of features reduces both the drag of the fan and the aerodynamic penalty of an open grille when not needed, but still allows the engine to drive cool when the clutch has to engage and the air vents have to open.

Farrell said the diesel engine is about 380 pounds heavier than the 3.5-litre EcoBoost, which is significant in two ways: the added weight means the diesel is not the towing king of the F-150 lineup, and Ford had to revise the spring tuning front and rear to hold up the extra weight. Towing is rated at a maximum 11,400 pounds, for a regular cab 4×2 model. Maximum towing for gasoline F-150s is 13,200 pounds. In all cases, heavier trucks (4×4, Super Cab, etc.) can tow less, since it’s the overall weight that’s a limiting factor.

Farrell said the motor is the same as used in diesel-powered Range Rovers, and is built at Ford’s engine plant in Dagenham, England. The biggest challenge with introducing the diesel was packaging, which is engineeringese for “making stuff fit.”

The transmission is unchanged from 10-speed gas models.

With some added sound insulation behind the dash panel, on the firewall and on the inside of the engine cover, the diesel is possibly quieter than a gas F-150. Farrell said some insulation was added at the base of the A-pillar, as well, as some sound was transmitting through there.

Kelly Taylor
Kelly Taylor has been writing about cars since 2000. His favourite ride has been the Audi R8 from Thunder Bay to Winnipeg, where he nearly traded the car for a Ford Ranger, a Greyhound Bus and the Blue Heron Gift Store in Kenora, Ont.
FILED UNDER:
FordFord F-150Ford ReviewsFord F-150 ReviewsCar ReviewsTruck Reviews

Is Jeep's new truck just a Wrangler in pickup form? Maybe not. We review the new 2020 Gladiator with full impressions and key features.
Read more
Ford

Ford's reborn mid-sized truck is back. We review the new 2019 Ranger on sale in North America early 2019. Here 7 things you should know before buying one.
Read more
Ram