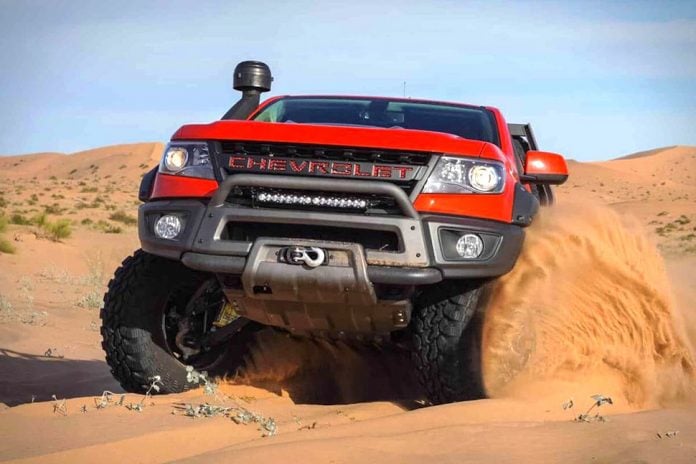 Following up on the Colorado ZR2 AEV Concept unveiled at SEMA back in 2017, this new truck built for the Overland Expo West show steps it up with a heavy-duty tray bed, giving the smaller pickup more flexibility with added cargo ability.

The Chevy Colorado returned to North American in 2015 after a short hiatus, and AEV has wasted no time ramping up the popular small pickup. The Colorado already boasts an impressive 7,500 towing capacity but the ZR2 Bison version is unlike anything you’ll drive off the dealer lot.

Related: Top Mid-Size Trucks You Should be Looking At

In addition to the utility bed, AEV added a long list of goods including a snorkel up top for swimming duties and winch below for yanking tasks, plus an LED light bar and stronger upper control arms and steel driveshaft to round things out. All rolling on massive 35-inch all-terrain tires housed in reinforced, beefy fender flares.

Despite its smaller, non-full-size frame like its Silverado sibling, the Colorado ZR2 Bison Tray Bed Concept can carry its own, proving it by passing rigorous 3-day testing in the Altar Desert.

No word on availability or pricing for this aftermarket Colorado but you can hit up the AEV site to learn more and see their other insane projects.

For everything Chevy Colorado including our latest reviews, head to this page.

Amee Reehalhttp://www.ameereehal.com/
Shooting motors professionally since film was a thing, Amee's work has been published in various outlets including NBC Sports, Chicago Tribune, SuperStreet, GlobeDrive, MotorTrend, and others. He's a writer, editor at TractionLife.com, AJAC member, and full-time digital marketer at Traction Media working with national brands. Find him traveling, spending time with his kids and family. Or golfing, poorly.
FILED UNDER:
ChevroletChevrolet ColoradoFeaturedAdventure VehiclesOverland