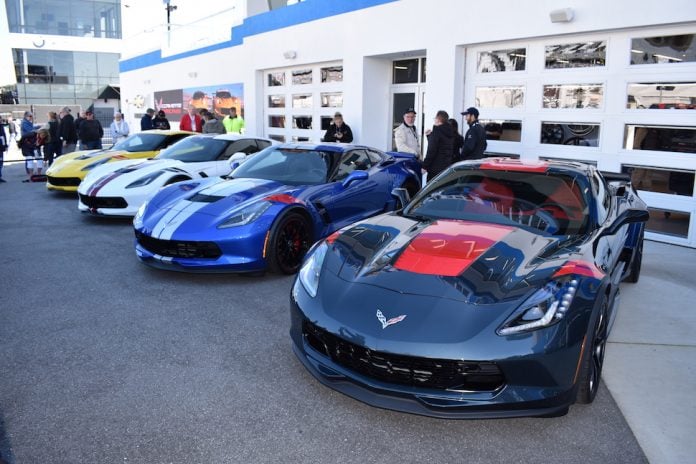 The next-generation, C8 Corvette is tipped to be revealed this year, but at this weekend’s Rolex 24 Hours of Daytona the wraps came off four new, special-edition Drivers Series Corvettes, based on the current C7 Grand Sport.

Like all Grand Sports, the cars are powered by a naturally aspirated, 6.2-litre, dry-sump V8 that makes 460bhp. Also standard are the Brembo brakes and Michelin Pilot Super Sport run-flats.

Magnussen’s has an Arctic White and red theme, Milner’s is Elkhart Lake Blue and silver, and Garcia’s is finished in the same yellow as the C7.R race machine. Gavin’s, meanwhile, is reminiscent of his race helmet design, which is black with a prominent red ‘G’.

“I’ve had the same helmet design since 1992,” the Briton told TractionLife.com, “so I wanted to match that colour contrast as closely as I could. When I looked at the options I had, I thought that this combination suited it best.”

Also read: After the Sinkhole: The National Corvette Museum in Kentucky Rises Up

Gavin’s choices are a dark Shadow Grey metallic paint, a red central stripe and hash marks on the front wings, satin black wheels with a red stripe, and red-painted brake calipers. Inside, the seatbelts and leather seats are also red.

The Drivers Series models go on sale in the spring. Production won’t be capped but sales will initially only be in the US, where buyers will pay an additional US$5,000 on top of a regular Grand Sport. Canadian sales could follow later if there’s sufficient interest.

The build number of each one will be indicated on a plaque on the centre stack. Car #001 for each driver was on display at Daytona.

“It’s pretty spectacular to have a car with your name on it,” added Gavin, whose CV boasts five class wins at Le Mans and one at Daytona. “And of course, as drivers we all like to compete, so we’ll be watching the numbers to see whose version sells the most!”

The 2020 Volkswagen Atlas Cross Sport isn’t as sporty as VW wants you to believe. Or is it? We review the new midsize 5-passenger SUV and break it down.
Read more
Jeep Gladiator

After the Sinkhole: The National Corvette Museum in Kentucky Rises Up