After the Sinkhole: The National Corvette Museum in Kentucky Rises Up 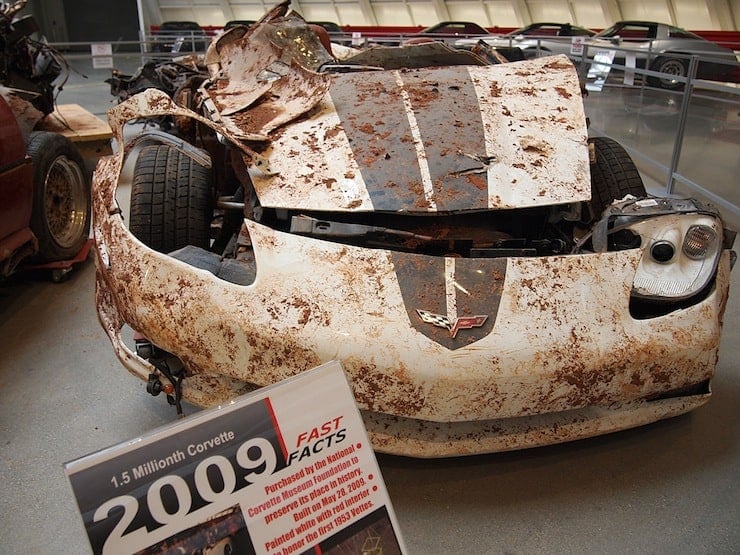 We visit the National Corvette Museum (NCM) and chat with Katie Frassinelli, marketing and communications manager, about their remarkable turnaround and huge boost in visitors. Oh, and that 9-metre deep sinkhole that captured the world’s attention last year.

Even if you’ve never been to the Bowling Green, Kentucky, you’ve probably heard of the National Corvette Museum (NCM) that received international fame in early 2014 when a nine-metre-deep sinkhole developed inside, swallowing up several historic vehicles. Turns out it wasn’t all bad.

“After the sinkhole happened, we decided to make the best of the situation — or rather, make lemonade,” says Katie Frassinelli, NCM marketing and communications manager. The museum made headlines again in the fall when the most valuable of the unlucky vehicles, the 1,000,000th production Corvette, was restored, down to the banner adorning the windshield. It resides near the same place it fell, alongside two others that were fixed as well as the ones deemed too far gone to salvage.

NCM is located right off of I-65, and the first thing people usually notice about the museum is Skydome, a bright yellow cone-shaped building with a pointy red top, now also known as ground zero.

“One of the first questions we get is ‘what’s the story behind the big yellow dome?’“ says Frassinelli.”

“Our iconic Skydome’s design is two-fold. On the one hand, if you turn it on its side, it looks like the taillights of a 1960s Corvette. The other idea was to create something eye-catching that you can see from the interstate.”

Built in 1994, NCM opened as tribute to the iconic American sports car, which happens to be built less than half a kilometre away at the Bowling Green Assembly Plant. And what a tribute it is: the facility measures 115,000 square-feet in size, and like the Corvette, features unique design cues such as curved walls mixed with traditional structural shapes. Passing through the entranceway, the lobby is basically a high performance Chevrolet dealership, except that everything is already sold. Various brand new models of the current seventh-generation C7 Corvette line the sides, awaiting their owners. Any ‘Vette customer can choose to take the delivery of his or her new car at the museum, and then take a VIP tour before driving off in their shiny new purchase.

After buying your tickets at the front counter ($10 adults, $8 seniors, $5 children), embark on the self-guided tour that starts with a short film, explaining NCM’s humble beginnings starting out as the brainchild of an organized group of enthusiasts dedicated to the restoration, preservation and enjoyment of the classic vehicles.

“When the National Corvette Restorers Society was looking to build a library and archives for Corvette, General Motors did not financially support it. Their reasoning was that if they funded a museum for Corvette, then they’d have to fund museums for other models, too,” says Frassinelli.

Following the movie, travel back to the 1950s Main Street in Nostalgia Alley, complete with mid-century barbershop, soda fountain and service station. Learn about the “father” of the Corvette, Zora Arkus-Duntov, a Belgian engineer and racecar driver who joined General Motors and helped turn the original roadster into a proper sports car. The permanent exhibit should be completed by the New Year, but in the meantime, a temporary section has been set up to illustrate everything related to the infamous sinkhole. There are statistics detailing the amount of international media coverage surrounding the event, and a monitor playing back security footage of the ground collapsing somewhere around 5 a.m.

After the sinkhole happened, we decided to make the best of the situation — or rather, make lemonade…

Venture on to the Performance Area, a circular 24-metre-diametre room, showcasing famous racecars through different eras. Technology buffs will appreciate the powertrains that have been cutaway to give a glimpse of what’s inside the high horsepower engines. You can’t drive an actual Corvette here, but you can get pretty close with the two driving simulators boasting accurate cockpits.

The biggest single display at NCM is the aforementioned Skydome with its 30-metre-high glass ceiling. The floor has been rebuilt and reinforced, and this is where you will find rare production vehicles on-loan from private collectors, and the eight victimized Corvettes. The repaired 1,000,000th Corvette stands in stark contrast to the crushed blob of glass and metal that was once the 1,500,000th built in 2009. Patrons visiting before Jan. 8 will get a chance to see the Car Part Art installation in the Exhibit Hall portion of NCM. A group of artists working in the medium of rubber, steel and cast iron have taken what some might consider scrap and have turned it into creations like an Eiffel Tower made from tire tread, and a painted tree with various pieces of automotive lighting hanging from its branches.

The museum is located at 350 Corvette Drive in Bowling Green, open daily from 8 a.m. to 5 p.m. For more information, visit www.corvettemuseum.org.

When equipped with the Z51 Performance Package, the 2020 Corvette will reach 60 mph in record time - the quickest, most powerful Stingray in history. Crazy.
Read more
Porsche