Priced below the Toyota Tacoma and above the Chevy Colorado 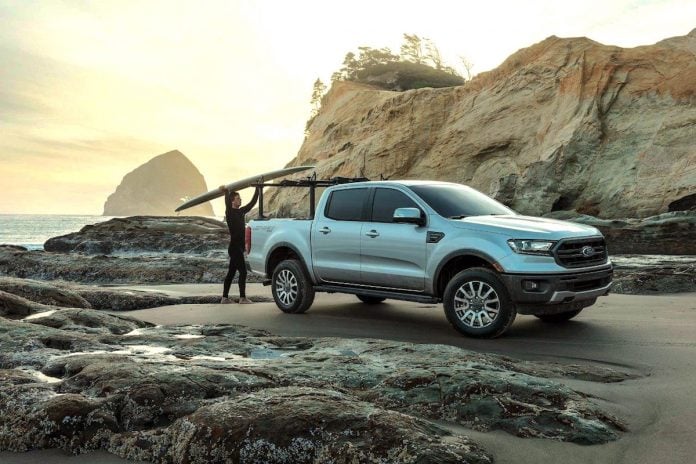 Ford truck fans eagerly awaiting the 2019 Ranger’s North American return now have some firm pricing numbers to get the ball rolling. Starting at around US$25,000 (depending where you live in the US), including the $1,095 delivery fee, Ford’s mid-size pickup will be offered in XL, XLT, and Lariat trims; equipped with either 4×2 or 4×4 drive options for either a SuperCab 6′ box or SuperCrew 5′ box configurations.

Powered by a 2.3L EcoBoost engine, it will take on the Toyota Tacoma, Chevrolet Colorado and others with what Ford claims will be best-in-class torque and payload numbers. An FX4 off-road derivative with a lockable rear differential will be available.

If you’re planning to haul some big toys, Ford just introduced new tech to make towing even easier with the new Ranger.

It’s good to see Ford re-entering the North American mid-size truck market with the 2019 Ranger, an updated, US-built version of the T6 model that is already sold elsewhere in the world. Considering the growing popularity of these small pickups, the move for a Ranger revival makes sense.

Below is US pricing; Canadian pricing to follow when released. Expect a 2021 Ford F-150 redesign to look not much different than its predecessor, but offers precisely what truck buyers need from a tech viewpoint.
Read more
Ford