Premium SUVs won’t match it for style, but does this sleek newcomer have more to offer wannabe SUV defectors? 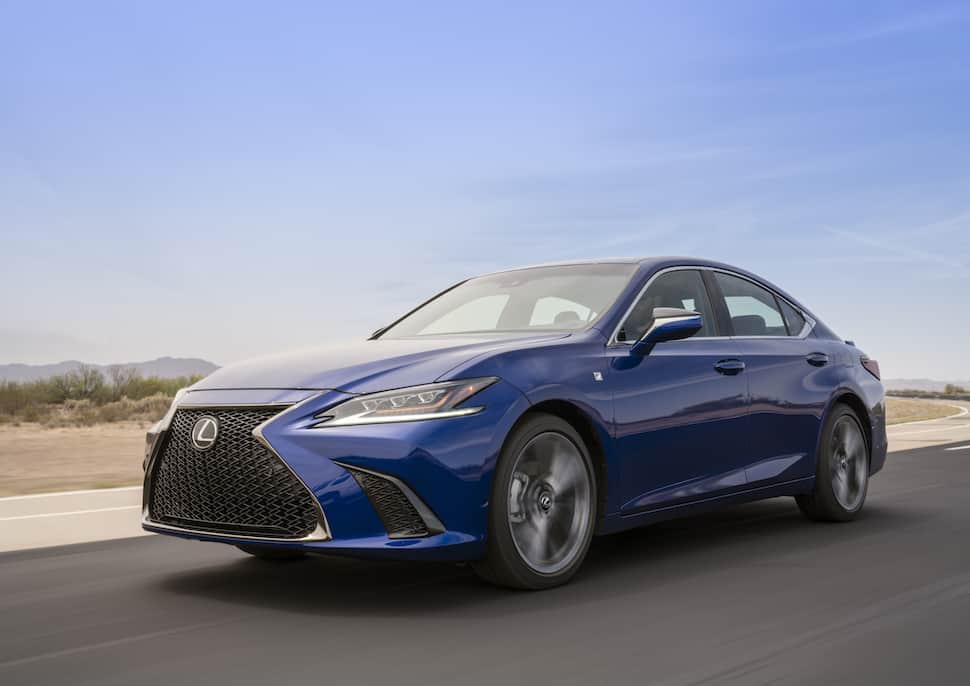 Calgary, Alberta – Competition in the premium sedan market has never been stronger, with mainstream brands offering increasing levels of sophistication at a lower price and new competitors such as Genesis vying with established players for buyers’ attention.

It’s against this background that a staple of the North American market emerges in an all-new version. The first Lexus ES went on sale in 1989, since when it’s been a particular sales hit in the US. The 2019 model tested here is the seventh generation, replacing a sedan that has been on sale since 2012, albeit with facelifts along the way.

US buyers can also opt for a dedicated F Sport model, whereas Canadians can add one of two packages to get the F Sport look, adaptive suspension and a sportier drive mode. The 2019 ES 350 starts at US$39,600 with the hybrid ES 350h at US$41,410.

Toyota has upped its design game in the past couple of years. In particular, the big-selling Camry, with which the new ES shares its GA-K global architecture, looks very sharp, even in unflashy rental-car spec. Meanwhile, Lexus’ own design language is maturing nicely, with signature elements such as the spindle grille now blended smoothly into attractive overall designs like the RC and LC.

The ES continues this upward swing. It’s a sleek, pretty car that to these eyes has a stack more curb appeal than the outgoing model. There’s an unfussy elegance to the lines and the detailing around the light clusters – front and rear – and creative use of LEDs is first-rate. We were also fans of the deep-blue Nightfall Mica paint.

The sweeping upward strokes that have a become a Lexus signature outside, are repeated in the cabin, too. It’s an attractive, driver-focused look that blends the substantial, 12.3in display screen fitted to this car (an 8in screen is standard) nicely into the instrument panel. Sitting directly to the left of the screen, the analog clock is a classy touch.

Unfortunately, some of the dashboard’s function – for both driving and infotainment controls – doesn’t quite live up to its form. The location of rotary drive-mode stalks to the side of the instrument binnacle is a little odd. One might even argue that individual drive modes are superfluous in a vehicle where sporting pretensions seem at odds with the otherwise luxurious character, F Sport models aside.

The ES is great when cruising, but in common with other Toyota cruise control systems, it appears to be impossible to reset the ES’s cruise speed to a higher value with a single press of a button – for example after accelerating out of a construction zone – without first completely dis- and reengaging the system. Adaptive cruise control only takes care of the situation if there’s a car in front that has also slowed down.

Turning to the infotainment, the ES has a central touchpad control system that we found fiddly to use – harder than the rival Acura system that has still to completely win us over. The writer’s tech-savvy daughter struggled with its operation even as a passenger, which doesn’t bode well for reducing driver distraction. It’s our view that all car makers still have work to do to successfully marry consumer demand for complex connectivity with on-road safety.

The location of rotary drive-mode stalks to the side of the instrument binnacle is a little odd.

Meanwhile the phone menu could use a link to the Bluetooth pairing function, which sits in a separate menu within the Entune 3.0 infotainment system. Entune does however offer all of the functionality drivers have come to expect from such systems, and certainly as part of the top-of-the-line, C$14,500 Ultra Luxury Package fitted here.

That includes a 17-speaker Mark Levinson audio system and Enform apps for traffic incidents, weather, Slacker, Yelp, sports, stocks, fuel prices and NPR One (public radio). The system updated itself automatically during our tenure via a painless over-the-air update.

The front seats in the ES are comfy, armchair-style leather items rather than sporty buckets. They’re both heated and ventilated, and totally in keeping with the cosseting character of the car. You do however sit relatively high, a feeling that’s exacerbated by the narrow glasshouse (that sleek styling again), which brings some visibility compromises, especially in the rear-three-quarter view. Rear legroom is good, but there’s no heating or ventilation for the rear seats.

The trim materials are generally of a high quality, but we felt that some of the switchgear material choices fell a little short of the best that the premium segment has to offer. Add in the occasional piece of trim that wasn’t secured quite firmly enough, and we were left feeling that the build quality fell a little short of the rock-solid levels we’ve come to expect from Lexus.

It’s surprisingly economical, too, recording an impressive 8.5L/100km in a week of mixed use, which compares favourably to the official figures of 10.6 around town and 7.2 on the highway. Economy-focused buyers might still prefer the ES 300h hybrid, whose official consumption is 5.2L/100km, but the V6’s numbers are nonetheless very competitive.

The ES is a comfortable, quiet car on the move. There’s next-to-no noise from the powertrain in anything but aggressive use. The ride comfort and isolation from wind and road noise are excellent, too, even on the 18in alloy rims that come as part of the Ultra Luxury Package.

The news is less good on the handling side. In terms of driver appeal, the ES falls short of the class best. There’s an absence of feel through a steering wheel that feels a little small and a definite sense that you are in a big, front-engined, front-drive vehicle, rather than something smaller and more agile.

It snowed heavily during our week with the car in Calgary. Despite the fitment of premium Bridgestone Blizzak LM001 winter tires, the FWD ES notably struggled for traction on the slippery roads. With no AWD option available, we’d recommend careful consideration if the car is going to be used regularly in winter conditions. Reverting to smaller wheels and taller tires for winter use, rather than the 235/45 R18s fitted here, might help.

The ES is a comfortable, quiet car on the move. There’s next-to-no noise from the powertrain in anything but aggressive use.

The ES predictably boasts a wide array of driver assistance and safety functions, collectively known as Lexus Safety System+ 2.0. Automatic high beam, dynamic radar cruise control and a pre-collision system with pedestrian and bicycle detection are among those included.

Rear cross-traffic alert is part of every option package and this writer can vouch for its operation after it stopped the car sharply when backing out of the garage with a child close to the rear of the car.

There are many strong contenders in the premium mid-size sedan segment, which is itself being eroded by buyers’ migration to SUVs. The equivalent SUV segment now accounts for more premium vehicles sold in North America than any other, making life tougher than ever for new sedans like the Lexus ES.

The ES 350 has plenty to recommend it, from its exterior style to its refined cruising manners. It has substantially more curb appeal than the predecessor model and is very reasonably priced compared to some of its German rivals. It deserves to have its fans, but the absence of AWD may count against it for some potential buyers, particularly in the Canadian climate. What others are saying about the 2019 ES

>The new ES is the most elegant execution yet of Lexus’s best-selling sedan. But if elegance is appealing, elegance with pace is more so. – CarandDriver

> The 350 runs to 100 kilometres an hour in 7.1 seconds; the hybrid adds a second to that time, but returns much better fuel economy, averaging 6.4 L/100 kilometres during the test. – Driving.ca

> We can’t help but feel that Lexus’ decision to amp up the ES is a misguided one. It’s the company’s best-selling sedan – whatever that’s worth in the heyday of the crossover SUV – and while we love the idea of automakers building sportier cars, not every vehicle needs that mission statement. – Motor1

Shopping for a sedan? Check out all our Sedan reviews here.