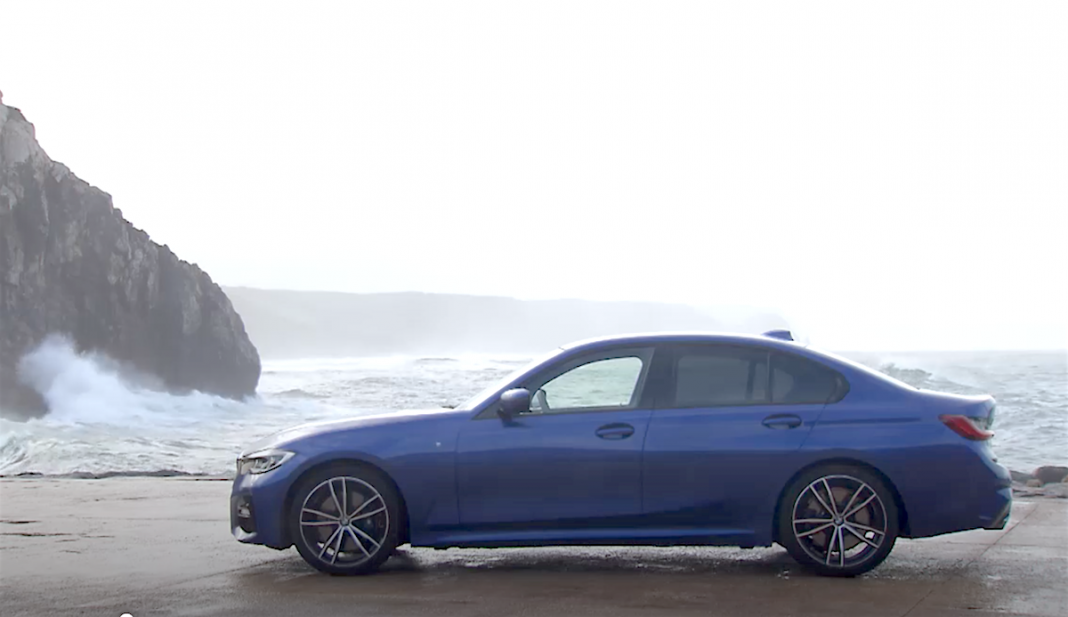 Editor’s Note: Unfortunately, none of BMW’s media sites provided adequate shots of the 2020 M340i aside from some prototype images, so we resorted to screen grabs from a b-roll video so please pardon the crappy image quality.

BMW has made the premium compact sedan to which all others aspire since 1975 – longer, if you were a fan of the 2002. The 3 Series was completely redesigned for 2020, representing the seventh generation of this iconic car.

It’s no longer BMW’s top seller in North America, that title having passed to the X3, but the 3 Series is still a lynchpin of the BMW range – and notably still sells in quantity in a market where even capable newcomers like the Alfa Romeo Giulia or Jaguar XE have failed to establish meaningful market share.

This latest 3 Series, codenamed G20, is only available as a sedan in North America. The five-door Gran Turismo has been axed and the stylish Touring (wagon) won’t be imported.

Related: Quick getaway in the 2016 BMW 328i Touring Wagon

The new M340i xDrive is 73mm longer than its predecessor, 15mm wider and 13mm taller. The wheelbase is 40mm longer and the track width 43mm wider (front) and 20mm (rear). It’s unmistakably still a 3 Series, though, and we wouldn’t want it any other way. The shell and elements of the structure are lighter than before, providing a lower centre of gravity to benefit ride and handling.

At the front the trademark kidney grilles have swollen somewhat and were flanked on our test car by the optional Laserlight setup with its distinctive, hexagonal daytime running lights. Another evolution of a familiar theme is the way the Hofmeister kink is designed into the C-pillar. At the rear, flatter, L-shaped LED taillights simplify the look compared to the outgoing model.

Our test car was finished in an understated dark shade of Tanzanite Blue II metallic (C$1,450/US$1,950) with the attractive, standard, double-spoke alloy wheels. Other rim styles – all 19in diameter – are available as options.

The cabin of the M340i xDrive is a reminder that for all the ‘premium’ feel of upwardly mobile mainstream brands, the truly premium brands remain on another level when it comes to interior material and build quality.

The unflashy but stylish dashboard and centre console were beautifully trimmed with an oak grain, open-pored wood effect that complemented the Cognac Vernasca leather seats ($1,450 in the US). The seats themselves weren’t quite as comfortable as we’d expected, however. We felt they could have used a longer squab for more thigh support.

BMW customers have long been ready to spend more on extras that other brands would offer as standard equipment. The M340i xDrive isn’t the worst offender in this regard, but one might have expected some of the items that came with our test car’s Premium Excellence Package (C$8,300) to have already been onboard a range-topping premium sedan: lumbar support, front and rear seat heating, ambient lighting, high-beam assistant, head-up display, wireless charging and a wifi hotspot, for example.

Other elements of the package are nice to have – Harman/Kardon sound system, parking assistant plus with surround view and the beautiful Walknappa leather dashboard, for example. We’re not sure that most people will benefit from the automatic trunk lid, however – it doesn’t open high like a hatchback, nor is it heavy to close.

A premium compact sedan isn’t the best choice if you regularly have gear to haul but the trunk space in the new 3 is up from 447 to 481 litres and there are new storage partitions within the trunk. The car coped pretty well when we folded the rear seats and filled the available storage space during a Scouts bottle drive, possibly the first and last time an M340i will be used that way!

Note that in the US, most of the features of the Premium Excellence Package are split between the separate Premium (US$1,400) and Executive (US$2,100) packages.

BMW was a pioneer of the wide central display screen and the (initially frustrating, later refined) iDrive central menu control. The latest evolution of the concept in the new 3 Series is called BMW Live Cockpit Professional. It features version 7 of iDrive, with a 12.3in digital touchscreen above the centre console linked to a 10.25in digital instrument panel for the driver. The fully configurable screens boast excellent graphical resolution and clarity.

The whole setup is linked to the BMW Connected app for iPhone and Android, through which you can share destinations for the navigation, remotely lock or unlock the vehicle, check service alerts, fuel level and range, or set the interior temperature. The app also integrates with Google Assistant and Amazon Alexa. It was easy to install and straightforward to work with.

The latest evolution of the concept in the new 3 Series is called BMW Live Cockpit Professional. It features version 7 of iDrive, with a 12.3in digital touchscreen above the centre console linked to a 10.25in digital instrument panel for the driver.

New for this generation of 3 Series is the BMW Intelligent Personal Assistant, which responds to the voice command of ‘Hey BMW’. Aside from familiar phone or navigation-related voice commands, the assistant learns the driver’s preference over time for aspects such as heat settings and will respond to queries about the state of the car (such as ‘Is the oil level okay?’). More capabilities will be added to the assistant in the future; for now, we found it easy to use but of understandably limited use in a week-long test drive.

Also worthy of note is how the 8-speed Sport Steptronic (automatic) transmission cleverly interacts with the navigation system and the active cruise control’s radar sensor – for example, to avoid unnecessary shifts during a sequence of corners, or use engine braking to slow down when approaching a vehicle in highway traffic. It’ll also use the optional Navigation System Professional (not fitted here) to prevent unnecessary or inefficient use of auto start-stop.

No new generation of 3 comes without improvements to its mechanical fundamentals – especially when the previous generation didn’t always live up to the nameplate’s high standards.

We’ll begin with the traditional heart of a BMW, the inline six-cylinder engine. The improved unit in the M340i has a new, single, twin-scroll turbocharger with an integral exhaust manifold and impellers that weigh approximately 25% less than those of preceding models. This should help the turbo build boost more rapidly. Meanwhile new fuel injectors increase the injection pressure to 350 bar for more precise fuel delivery and cleaner combustion.

Two important chassis changes are the adoption across the range of ‘lift-related dampers’ and an improved steering setup. The former is a passive system designed to improve body control on undulating roads; note however that the optional, Adaptive M Suspension (C$600) was fitted to our test car.

The steering improvements address criticisms of the outgoing F30 generation whose electrically assisted, variable ratio setup didn’t always provide the confidence and feedback that 3 Series drivers had come to expect.

The new rack provides a more graduated change in ratio, while geometry changes increase the amount of natural, mechanical – as opposed to electrically assisted – self-centring torque in the steering, which should improve feel.

The first thing to say about how the M340i xDrive is how comfortable it is, particularly its suppleness at low speeds. That might be an odd starting point for the review of a high-performance sedan but in everyday driving you’ll notice great comfort more often than you’ll need great handling.

It’s important to add however that our car, as mentioned, had the optional Adaptive M Suspension, which should in theory make it easier to specify dedicated comfort and performance setups, rather than a single one-size-fits-all suspension tuning. We’d be interested to see how the standard passively damped car compares.

Note too, that this M340i was sporting Michelin Pilot Sport 4S summer tires (front 225/40 R19, rear 255/35 R19 – a no-cost option, $750 in the US). Runflat tires have come a long way since BMW pioneered their use in the early 2000s (the E90 generation was the first 3 Series to get them) and we’d hope that there shouldn’t be a ride-comfort penalty for their fitment. Without trying an M340i on passive dampers and runflats, it’s impossible to make a blanket judgement on the car’s ride comfort. As always, try before you buy.

The steering is precise and not overly heavy. It also felt more natural than BMW’s earlier efforts at variable-ratio systems, which is a very good thing, but don’t expect a return to the hydraulically assisted highs of, say, the E36 generation.

The peak torque of 369 lb-ft arrives at 1,800rpm and continues all the way to 5,000rpm (redline is at 6,500rpm), which tells you everything about the engine’s flexibility and performance.

The 382 HP engine is excellent, in the best traditions of the BMW six – smooth, flexible, quiet when you need it to be and sonorous when working hard. The peak torque of 369 lb-ft arrives at 1,800rpm and continues all the way to 5,000rpm (redline is at 6,500rpm), which tells you everything about the engine’s flexibility and performance. The quoted 0-100km/h (62mph) time is 4.3 seconds. The economy isn’t bad, either – we got 9.7L/100km (24mpg) in mixed driving, which is refreshingly close to the official combined figure.

Pretty much every other aspect of the driving experience is what you expect from a 3 Series. The only glitches we spotted were with some of the driver assistance systems: the speed limits indicated in the instrument panel were sometimes wrong and the lane-centring system gave the car a tendency to wander around in the lane more than we’d have liked.

BMW has sold some 15 million 3 Series cars over the nameplate’s seven generations. It’ll sell a few million more if they continue to be as good as this M340i xDrive. In this spec at least, it’s a very complete, everyday-usable, luxury performance car that goes about its business in an appealingly unflashy way.

In recent years the overuse of performance branding on run-of-the-mill models – everything from R-line Volkswagens to AMG Sport Mercedes – has risked diluting the magic of those sporting monikers. BMW M is arguably the most sacred of the lot, so it’s great to know that the M340i, while not a full M car, amounts to more than a cosmetic upgrade.