When the Range Rover Evoque was introduced for 2012 it caused quite a sensation, as the compact utility featured a striking shape and design elements and capable handling on- and off-road.  It set itself apart from other vehicles in this category by the fact that there were both two- and four-door versions, and for a brief period (in some markets), a convertible unveiled in 2012 in concept form.

While beautiful to look at and admire, the original Evoque did have some issues that kept it from being the perfect dance partner for some, including less than optimal rear visibility, somewhat sluggish performance on the engine front, and it proved to be a tad noisy at speed.  Despite these shortcomings the Evoque garnered lots of attention, established itself a healthy following, and has stood up well in the reliability department.

Well for 2010, Land Rover has thoroughly revamped the Evoque to best equip the model for the onslaught of competitors that are entering the luxury compact utility arena.  The second generation Evoque represents more than the typical refresh, as work has been done in all departments to ensure that it features all the latest equipment and technology available as well as address some of the concerns that existed with the original product.

Styling is familiar, but much effort was put forth to enhance the Evoque’s visual appeal and aerodynamic efficiency. The vehicle still has a high waistline and a narrow greenhouse, but the entire body is new. The new model features a more chopped and sporty look that hints at the design of the previous coupe version, but with the more graceful and modern lines we now associate with the company’s own Velar line. Like the Velar, the new Evoque benefits from more simplified body lines, an absence of excess trim, flush-mounted windows and retracting door handles. This all adds up to a significant reduction in wind noise as well.

Long and lean LED headlamps and a minimalist grille highlight the vehicle’s fresh new face, both fitted tight to the body to further cheat the wind. A similar treatment exists at the rear, where slender LED tail lamps and a subtle diffuser stand as highlights. The steeply raked windshield, dark pillars and glass give the vehicle a luxurious look, while the optional black roof, wheels and trim fitted to our Corris Grey tester added a slightly menacing flair.

Interior styling is clean and uncluttered, and I felt immediately comfortable when I got behind the wheel. Mind you this may have been due to the fact that this unit was equipped with the optional 16-way adjustable heated massage seats.  Nonetheless, the seats proved both comfortable and supportive, and the quality of the leather was impressive. The presence of a panoramic sunroof bathed the Evoque in ambient light and gave the cabin an airy feel.

I found the ergonomics to be good, and all the major controls, switchgear, and gauges fell readily to both hand and eye. The look of the dash and interior is far from flashy as its minimalist by design, but the quality and finish of all the trim pieces and accessories speaks quality.

The Evoque’s virtual instrument panel is easy to read and well protected from glare, as is the dash mounted InControl Pro infotainment screen which provides navigation as well as a wealth of access controls for various accessories and equipment. An optional heads-up display system was on board which helps reduce the level of driver stress caused by distraction when operating the vehicle in traffic or challenging conditions.

The steering wheel offers secondary thumb controls for more vital functions, and there is a pair of shift paddles handy should the driver be inclined to select his or her own shift points.

Stepping into the rear passenger compartment proved to be somewhat of a revelation, as I managed to squeeze my over-sized frame into the seating area without much drama or effort. In addition to stretching the wheelbase the design team has also cleverly carved out a knee well in the front seat back to accommodate legs, and as I stand well over six foot, this was greatly appreciated. I found the two outboard positions to be more than adequate for my needs, but I must admit, I don’t think I would want to travel three abreast back here for extended periods.

That same wheelbase extension accounts for a little more usable rear cargo space than the previous iteration.  It’s far from enormous, but with the rear seats folded flat the Evoque will swallow 1,156-litres of gear.

Under the bonnet resides a 2.0-litre turbocharged four-cylinder engine that produces 296-horsepower and a 295 foot-pounds of torque. However, the engine linked to the R-Design designation benefits from additional technology in the form of a mild hybrid system. Known as the MHEV system, this unique powertrain gathers energy during periods of deceleration and stores it in a 48-volt battery for future use such as during acceleration. As a result, acceleration in the R-Dynamic model is quite quick, with sprints to 100 km/h stopping the clock in 6.6 seconds.

With its relatively wide stance and tidy dimensions the Evoque exhibits dynamic handling for a compact utility vehicle. The steering is good, but not perfect, as it feels somewhat numb at times. However, I found that the Evoque tracks true and precise largely due to the fact that it carries its weight low, rides on meaty performance tires, and benefits from the presence of a Dynamic Stability Control system which will automatically step-in to reduce engine torque and apply the brakes as needed to correct the vehicle’s direction of travel by counteracting understeer or oversteer.

Those drivers with an enthusiast bent can configure the Evoque’s performance parameters – including throttle mapping, gearbox shift points, steering settings and suspension – by using the optional Configurable Dynamics system.

Dynamic Stability Control (DSC) monitors the dynamic behaviour of the Range Rover Evoque, intervening to vehicle stability. DSC reduces engine torque and applies braking to the appropriate wheels to correct the vehicle’s direction of travel by counteracting understeer or oversteer.

As this is a Land Rover product it is inherently a competent off-roader.  Product planners have made sure that prepping the Evoque for such excursions will be a breeze by making Range Rover’s Terrain Response 2 technology available.

As this is a Land Rover product it is inherently a competent off-roader.  Product planners have made sure that prepping the Evoque for such excursions will be a breeze by making Range Rover’s Terrain Response 2 technology available. This proven piece of kit provides an automatic mode to the Terrain Response settings making it very user friendly.

Of course, the new Land Rover Defender with pricing just released, might be more your speed for serious off-road excursions.

Other Evoque Features & Upgrades Worth Mentioning

In an attempt to keep up with the Joneses Land Rover allows you to load the Evoque up with a host of new equipment.  One of note was designed to alleviate the rear visibility issues that come with designing a vehicle with a sliver for a rear window.  To solve this problem, Land Rover has added the optional Clear Sight Rear view mirror which utilizes a roof mounted camera to deliver an unobstructed view.  A 360-degree camera system is also available.

Land Rover hopes that the Evoque V2.0 will continue to attract new and younger buyers to the brand as well as satiate the model’s substantial fan base.  I suspect that with its modern powertrain, well-versed infotainment system, and improved levels of safety equipment, the stylish Evoque will continue to blaze a trail to sales success.

Check out our Evoque page for more. 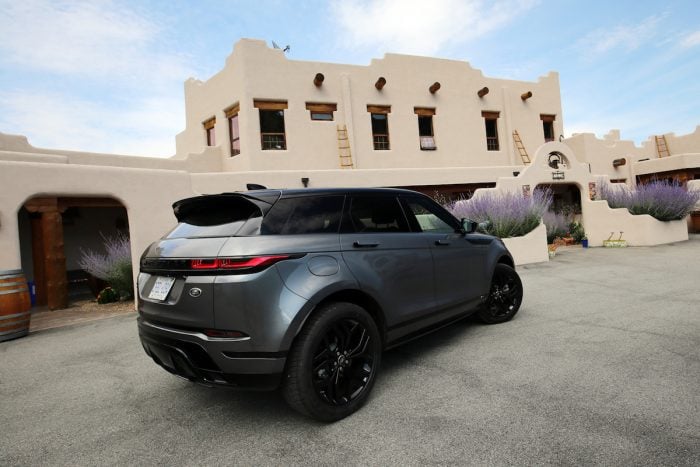 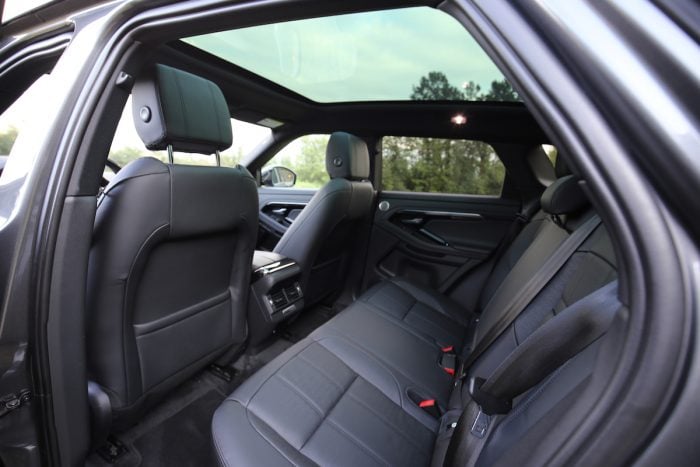 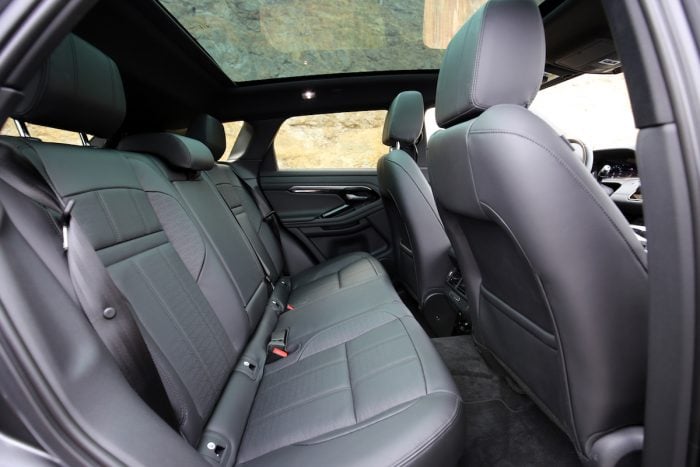 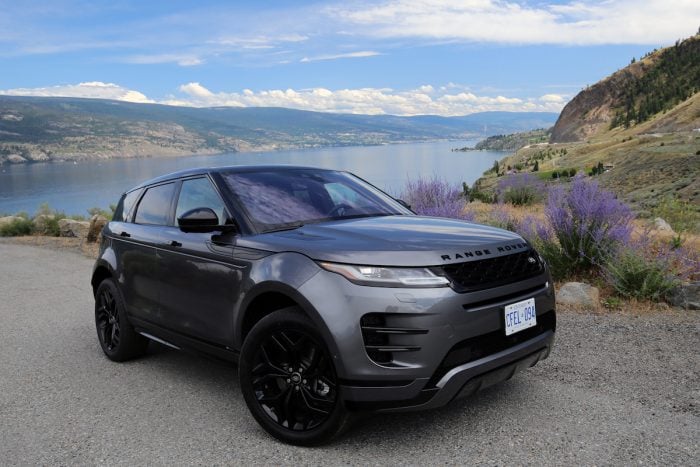 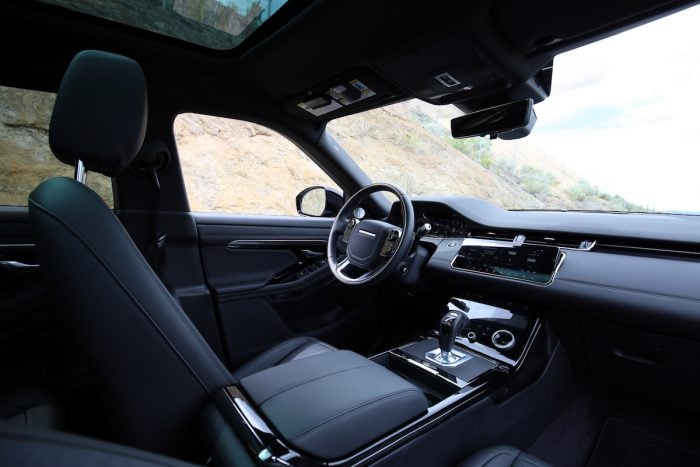 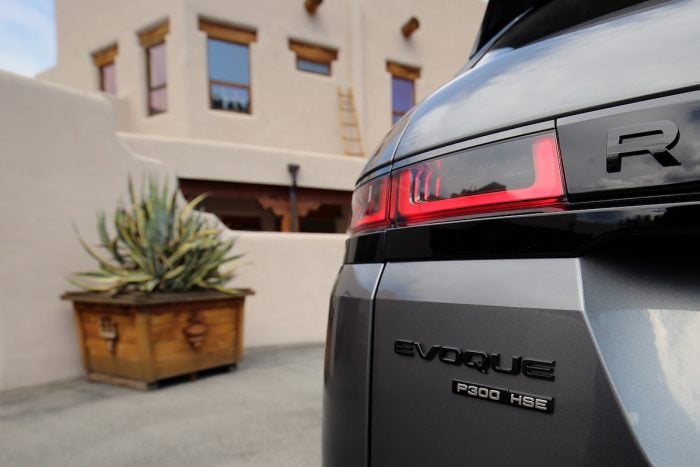 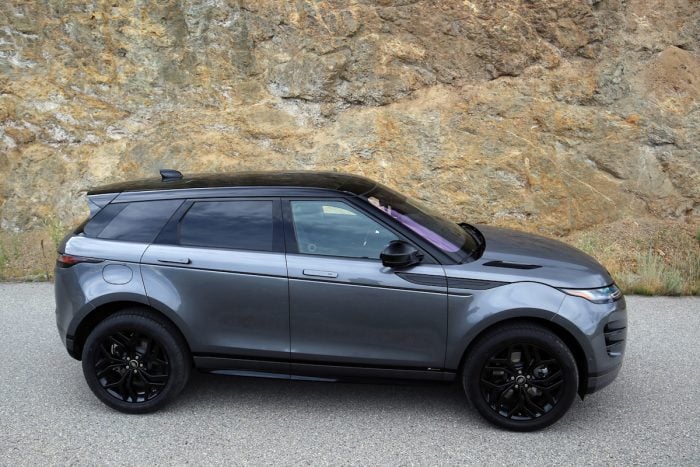 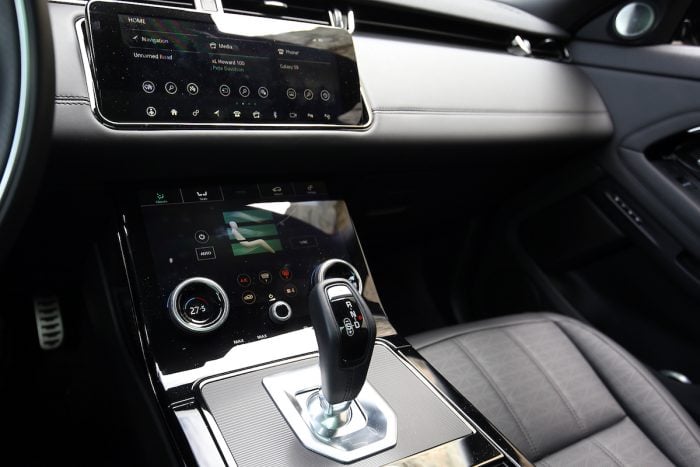 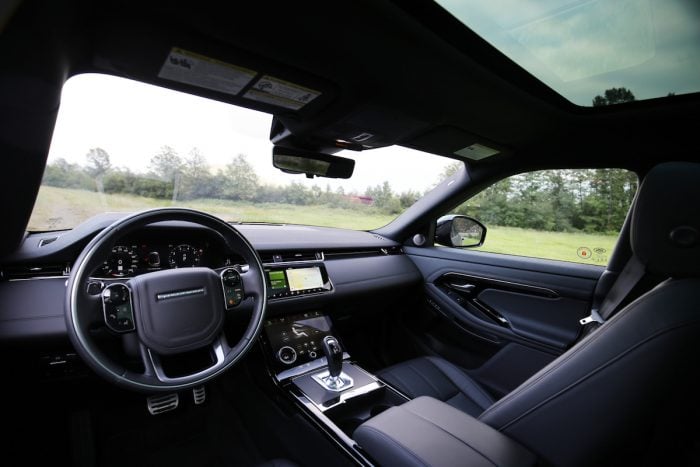 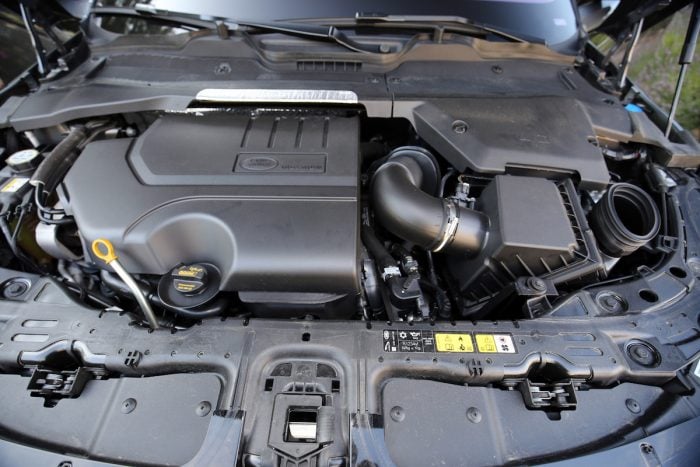 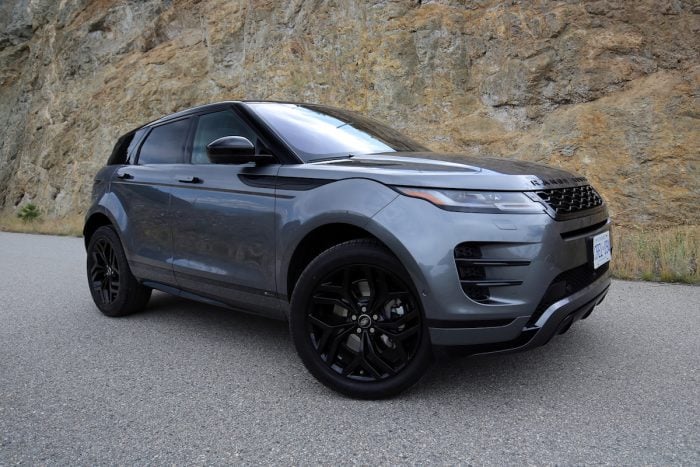 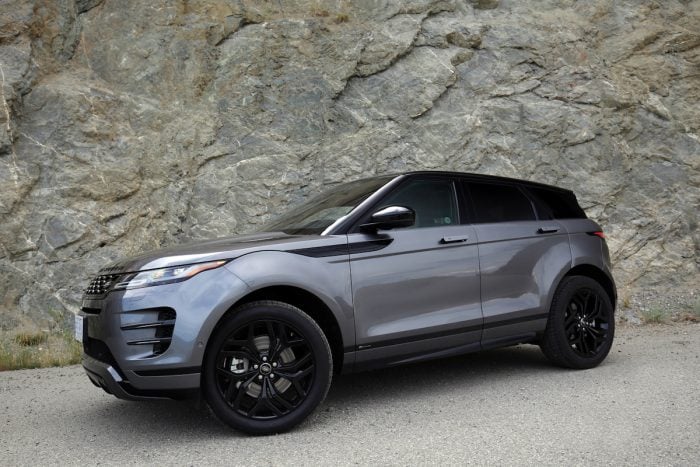 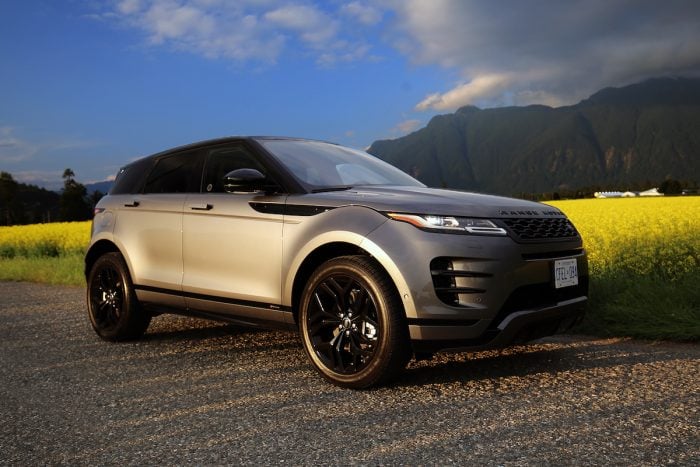 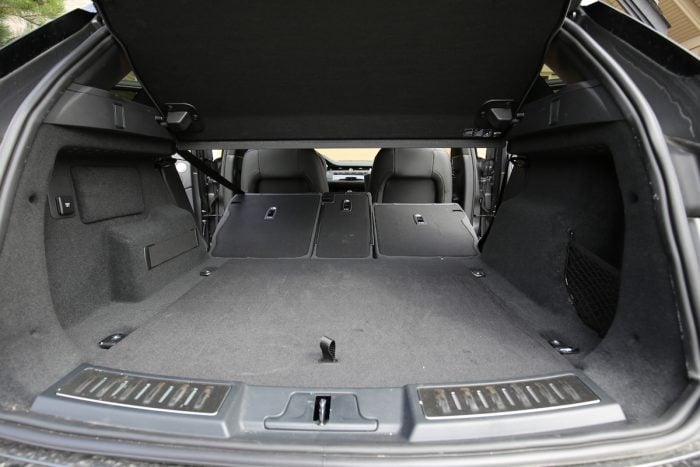 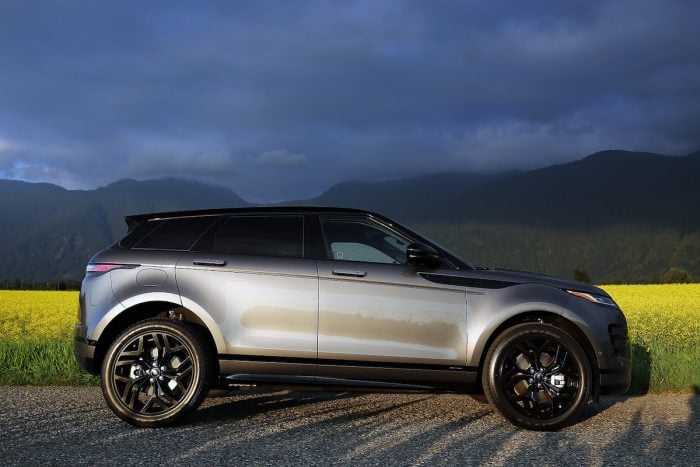 Russell Purcellhttps://www.flickr.com/people/autoexposurecanada/
Russell Purcell is an award-winning automotive journalist and photographer based in Vancouver, B.C. His passion for automobiles was sparked at the tender age of six, when a family friend gave the wide-eyed first grader a ride to school in a track prepared Porsche 911 RSR. He continues to fan the flames by building an impressive library of automotive related books as well as a vast collection of interesting automobilia and motoring artefacts. Russell is a member of the Automobile Journalists Association of Canada, and is active on Twitter as RoadTestRuss.
FILED UNDER:
FeaturedSubcompact SUV CrossoversLuxury Subcompact SUV Crossovers

How much power does the 2020 Ford Edge ST put down?