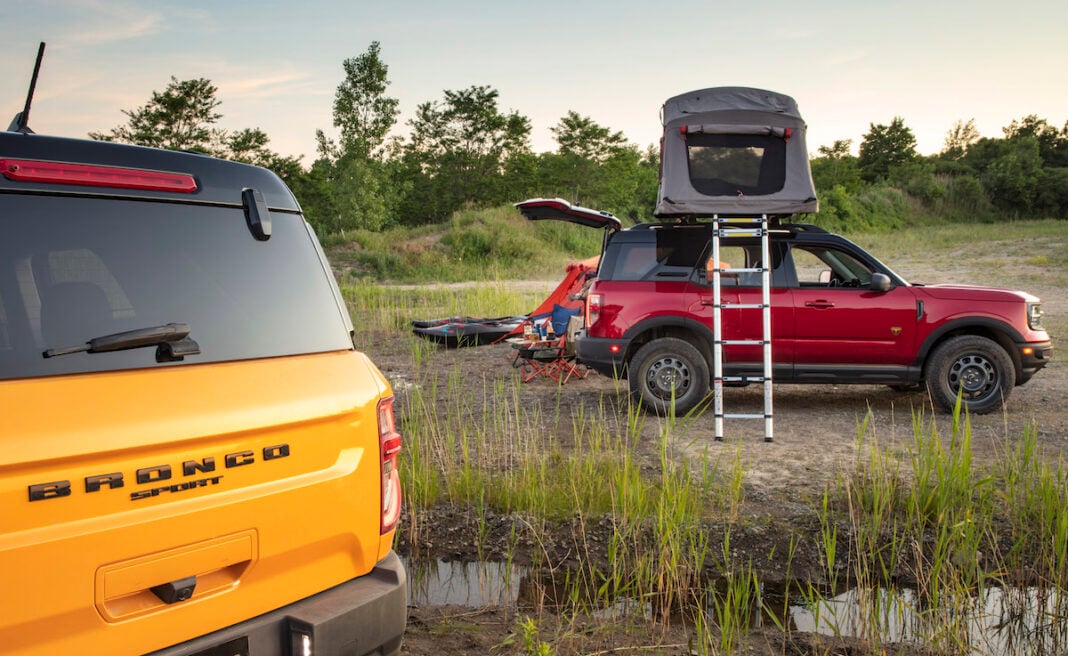 When Ford put together its plan for the Bronco’s comeback, it identified the need for a smaller model below the main 2- and 4-door off-roader – something that was more of an everyday vehicle for a customer base evenly split between male and female buyers.

It was important however for the model to still fulfil what Ford has dubbed the ‘Bronco commandments’, namely innovative design, capability, and extreme durability testing.

So, while the 2021 Bronco Sport, which arrives in dealerships at the end of the year, shares much of its DNA with the big-selling Escape, this new contender in the small-SUV segment has been developed to be a very different animal.

The styling of the Bronco Sport, with its rugged profile and high-rise safari roof, provides a clear distinction from the more car-like looks of the current Escape. It’s clear that Ford didn’t need to go for a chunky, RAV4-style look with the Escape because with the Bronco Sport on the way, it had both bases covered. From the pictures it looks to be an attractive vehicle: as one Ford insider put it, “That rare thing – a truck that has character”.

Naturally there are design cues shared with the bigger 2- and 4-door Broncos, like the trail sights on the hood and the grille with prominent Bronco branding.

Ford spent a lot of time on the design of the rear of the truck, knowing that it provides a working area and social hub for owners. The liftgate incorporates directable floodlights to help you see your gear in poor light, long grab handles that double as rails to hang towels or clothing and even a bottle opener. Separate rear lift-glass helps ease loading and unloading, too.

Accessories on the way

The high-rise roof maximizes interior space and enables two 27.5in mountain bikes to be carried upright with the available, dealer-installed Yakima interior bike rack. And while the Bronco Sport won’t have the almost infinite customization options of the bigger Broncos, the bike rack is only one of more than 100 Ford-approved accessories that will be available from launch.

There are plenty more reasons why the Bronco Sport isn’t an Escape on steroids, too. Four-wheel drive is standard on all models, as are a switchable Terrain Management System (TMS) with ‘G.O.A.T.’ (go over any type of terrain) modes and long, flat roof racks that can be used as a base for a roof-top tent. Bringing the full-size spare wheel inside helps free up room underneath for better off-road performance.

The Bronco Sport Badlands – the most off-road focused grade available, much like Jeep’s Trailhawk trim – gets 8.8in of ground clearance, which is an inch more than the Escape and contributes to competitive departure, approach and breakover angles.

The Bronco Sport also boasts a unique track width, suspension and tires to aid its performance off-road, which was proven during demanding tests in California’s Anza-Borrego Desert State Park. Ford says that the TMS, which integrates settings for different technical features into a user-friendly single interface, has been tuned such that it doesn’t try to outsmart the driver.

The 2-litre-EcoBoost-powered Badlands (245 HP, 275 lb-ft of torque) even gets upgraded transmission cooling and a twin-clutch rear drive unit with a differential lock that enables almost all available torque to be diverted to the wheel with the most grip.

There are also all-terrain tires, underbody bash plates and a front off-road camera with lens washer so that the driver can keep an eye on the trail surface. Ford claims that the Badlands will best the Compass Trailhawk in every area; it’ll also tow 2,200lb.

The Bronco Sport line-up is as follows:

Outer Banks – majors on style and technology. Additions include 18in wheels and leather interior

Bronco Sport pricing starts at US$28,155 / C$32,199. Prospective customers can already reserve a Bronco Sport with a $100 deposit (US$ or C$) at ford.com and ford.ca respectively. To order or get more info and pricing, visit Ford’s sites: