Things started off somewhat oddly when Hyundai gave the Genesis nameplate its own marque. After launching a sedan-exclusive lineup that can be purchased in “boutiques” rather than dealerships, and delivering cars on trailers for test drives at home – Genesis finally caught up to the luxury SUV trend in the hopes of ramping things up.

As you may know, puncturing the market with a luxury brand that has Hyundai in capital letters all over it is a feat that takes time and energy, but Genesis seems to be up for the task. So far.

The first of (probably many) Genesis SUVs is the GV80. It competes heavy hitters like the Mercedes-Benz GLE, BMW X5, Audi Q7, etc.

We took the 2021 GV80 for a spin to see if this newcomer has the right makings to be popular, and to see if it can disrupt Germany’s Big Three.

At first glance, the GV80 is nothing less than stunning. Not only because of wise choices from the design department, and coherent components, but also because it doesn’t try to be a larger version of a sedan. It’s a truck. A big beautiful and shiny truck.

From the new split headlight design shines and is a 360-degree feature – following the line on the side with chrome accents and to the rear with the split taillight feature, to the massive front grille and the original wheels and colour palette, the GV80 was designed by pros.

With an impressive presence, all the while standing out from its German counterparts – the GV80 makes a good first impression.

Most GV80 rivals offer a wide variety of engines with an upper – more aggressive, motorsport-inspired range topper that makes a lot of noise. The GV80 only has two engines, and although plentiful in terms of power, the lineup is not as diversified.

First, the 300 horsepower, 2.5-litre four-cylinder turbocharged unit with 311 lb-ft serves as the base engine, and a turbocharged 3.5-litre, 375 hp/391 lb-ft of torque powerplant is the second and strongest option.

Both units deliver segment-standard power, but if you’re the heavy foot kind, go with the 3.5.

The smooth-shifting 8-speed auto gearbox responds quite quickly when the accelerator pedal is rolled in from a stand still. Once at speed, pick-ups are also executed promptly – the gearbox doesn’t hesitate on which gear to go with.

Throwing the GV80 around showed how the plush ride has its limits, but only when stiffness is needed. In other words, the GV80 provided good compensation for road imperfections but reacted with minimal body roll when tossed in an on-ramp at high speed. It’s not a road-dripping Audi Q7, but it definitely provides good balance. The GV80’s all-wheel-drive system is rear-biased and an electronic limited-slip differential can manage the best and worst condition – that also helps the GV80 handle itself.

It’s not a road-dripping Audi Q7, but it definitely provides good balance.

The standard Idle Stop and Go feature on the GV80 is a finicky one. It lags, jolts and can become annoying when driving in urban settings. Like most if not all systems of this kind, you can deactivate it.

Yup. You read that right. No. We’re not the ones who came up with the surname. It’s been going around the internet for a while now, and we have to admit that the GV80’s Prestige variant somewhat makes a case for it – but it doesn’t apply to everything inside the GV80.

First, assembly quality is irreproachable, and the mix of tones and textures embedded between dashboard, the digital climate controls and jewel-like rotary dial in the centre console is a work of art. The spaceship-like steering wheel, however, might draw criticism for its lack of sporty “feel.”

The seats are some of the plushest and most comfortable out there – the Nappa leather in our Prestige tester demonstrated its capabilities for long-haul trips.

A clear infotainment screen stands 14.5” wide on top of the dashboard – a little too far from the driver’s reach. The system it projects could be more intuitive; it will take some time to get used to. Fortunately, you can still accomplish plenty with the analogue dials and buttons.

Genesis wants young professionals to buy its cars (isn’t that what all manufacturers want?). For one part, they are an influential goldmine that could provide the brand the propulsion it needs for a proper take-off. But this customer type has proven itself hard to snag from Germany’s Big Three.

Genesis is making more noise than the other “outcasts” of the segment, like Lexus and Acura. And if you take the GV80’s price and add all the inclusions, combine that with the look, quality of finish and warranty and maintenance – the GV80 is almost an unbeatable proposition.

The brand can only hope that the GV80 and the upcoming GV70 will catch the attention of Audi, BMW and Mercedes-Benz buyers. And if the GV70 drives and “feels” as good as the GV80 – it might be the long-awaited home run. 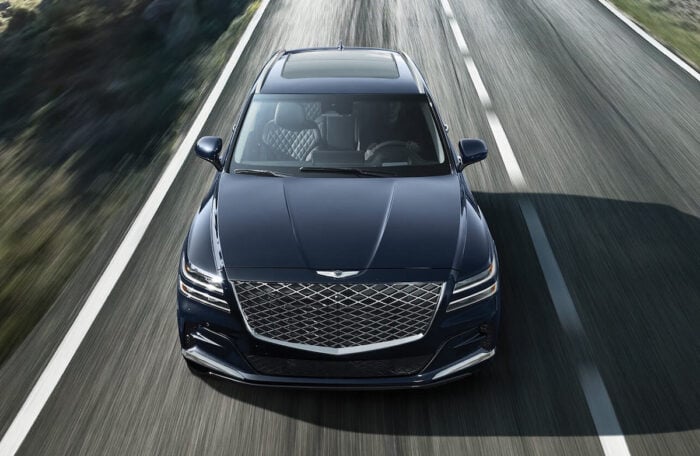 Louis-Philippe Dubé
Louis-Philippe Dubé has been contributing to a variety of established motor outlets for years, including Quebec's Le Guide de l'Auto. His passion for everything automotive comes from a career as a mechanic, but also from the family vehicle collection that includes a 996 Porsche Turbo and a 2006 Ford GT.
FILED UNDER:
FeaturedFull-Size SUV 8 SeatersLuxury Full-Size SUV