The German's pair of compact luxury SUVs head into 2022 with new looks, improved equipment and an optimized range structure. Here's a closer look at the two models. 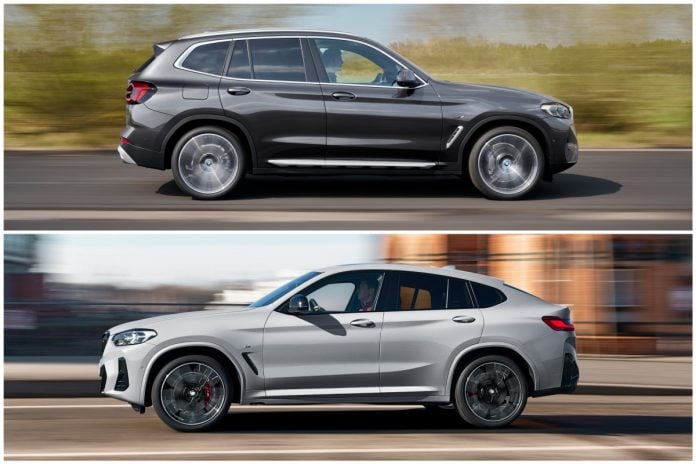 If you have seen the previous X3 model, you will notice the new 2022 BMW X3 comes with slimmer headlights, a bigger kidney grille, reshaped front bumpers with triangular-shaped vertical air intakes, in addition to revamped rear bumpers and taillights. The German automaker also offers the M Sport Package for the new model to add M-specific touches for customers wanting to save money on a full-blown M model.

Talking about the X3 M40i, it differs from the standard model with a distinct BMW M kidney grille, an M emblem, M exterior mirrors, and exclusive tailpipe trim. Besides, the X3 M comes with aggressive bumpers and bigger openings to better cool this performance version.

Inside, BMW made several changes to give the 2022 X3 a novel feel. These include an updated centre console, a revised instrument panel, and a new 10.25-inch infotainment display. The Live Cockpit Professional upgrade is also there for customers fancying the bigger 12.3 inches instrument cluster and an infotainment screen of the same size.

Below, a quick front cabin comparison of the 2022 BMW X3 xDrive30e compared to the more upscale and much sportier 2022 BMW X4 M40i:

The X3 M’s interior differentiates itself through powered M sport seats with brightened M badges, Merino leather upholstery, Alcantara knee pads on the center console, the M multifunction steering wheel, and so on.

Moreover, the standard X3 M and X4 M carry over the BMW’s 3.0-liter turbocharged straight-six, generating the same horsepower as previous models (473 hp) but more torque (between 13 and 37 lb-ft).

While the 2022 BMW X4 embraces the new front design of the X3, it distinguishes itself by adopting the mesh kidney we find in other sporty BMWs. Besides, the X4 has adaptive LED headlights with Matrix function, optional Laser Light, and full LED rear lights.

Like the new X3, the 2022 BMW X4 gets the center console from the outgoing BMW 4 Series. Here again, a 12.3-inch touchscreen is elective. Other standard features encompass sports seats, automatic climate control with 3-zone control, an updated control island with the gear selector lever, buttons for the start/stop system, the electric parking brake, hill descent control, and more.

Similar to the X3 sDrive and X3 xDrive30i, all the X4 xDrive30i variants carry a turbocharged 2.0-liter engine pumping out 248 horsepower (184 kilowatts) and 258 pound-feet (349 Newton-meters) of torque, offering the same performance figures as the X3. Again similar to the X3 M40i, the X4 M40i gets a turbocharged 3.0-liter inline-six with a 48-volt mild-hybrid tech.

BMW will start manufacturing the new 2022 X3 and X4 in August and the M models a month after.