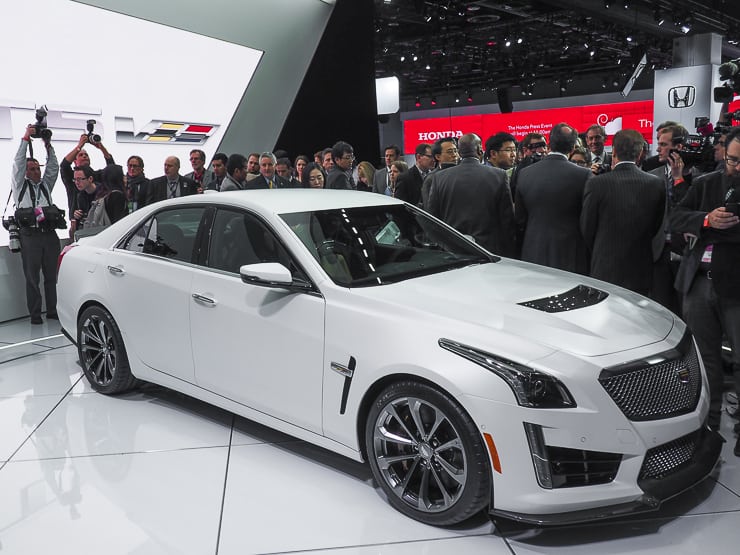 Each year as you head towards the North American International Auto Show (NAIAS) held at the COBO Center in downtown Detroit, it’s hard not to notice the General Motors influence on the city. For example, the looming series of towers in the distance known as the GM Rennaissance Center. But cool buildings aside, the company’s reputation obviously comes from the vehicles they produce, as it should be — especially following the diverse portfolio of cars they unveiled during 2015’s show press preview. The Avenir – that’s French for future – was teased to the delight of a select group of journalists a night ahead of the official NAIAS press preview. The concept car is a flagship sedan hinting at potential future design cues for the three-shielded brand. Touted as blending ”sports proportions and all-new interpretations of traditional Buick Cues,” the long hood is matched by a roofline that aggressively slopes down the rear of the car giving it a fastback-ish appearance. It’s got full LED exterior lighting, a fuel-efficient direct-injection V6 motor, twin-clutch all-wheel drive, nine-speed automatic transmission with paddle shifters and requisite OnStar 4G LTE connectivity with the ability to act as a Wi-Fi hotspot. First, let me preface by saying there are no plans at the moment to bring this convertible to Canada. With that out of the way, the Cascada is a two-door drop top (Buick’s first since the 1990s) with by a 1.6-litre turbocharged engine producing 200 horsepower. Oomph is delivered via the front wheels and shifting is done for you using an eight-speed automatic. Highlights include the speed at which the fabric top can be retracted (17 seconds), 20-inch alloy wheels, seating for four and generically-pleasing looks. It goes on sale in the US in early 2016. People knew a redesigned Chevrolet Volt hybrid was on its way, but it came as a bit of a “shock,”excuse the pun, when the all-electric Bolt Concept was announced. Finished in a bright orange paint, the Bolt is a five-door hatchback, long-range EV that has a range of over 300 kilometres and utilizes lightweight construction materials including aluminum, magnesium and carbon fibre. Throttle dynamics, ride height and suspension tuning are all adjustable via various driving modes settings. It is also fully connectable with a smartphone that can act as a fob and incorporates concept automatic parking technology. The real surprise? It’s envisioned to start in the neighbourhood of $30,000. If the only thing stopping you from liking the Chevrolet Volt was its futuristic styling, then take a look at the completely redesigned version. It’s a lot sleeker-looking with contoured headlamps, a shiny, aerodynamic grill and more muscular fenders and doors. The inside still retains familiar dual digital displays with an eight-inch information screen at the top and a bottom touch screen controlling the MyLink infotainment system. Seating capacity has been increased from four to five. Both the lithium-ion battery pack and two drive motors have been made more efficient to increase acceleration, as well as bring the total pure electric driving range up to 80 kilometres. On the complete opposite side of the spectrum, this brings us to enthusiast-favourite Cadillac CTS-V. And how could it not be? This extreme-performance-enhanced version of the Caddy’s mid-size luxury sedan just happens to be the most powerful car in Cadillac’s 112-year history, and it boldly issues a warcry to its competitors and non-believers alike. “We are here to disrupt and shatter the status quo,” said company president Johan De Nysschen during the press conference. “It’s lighter, more agile, more potent than its European peers.” And that it is — 640 hp, 630 lb-ft of torque and 0-100 km/h in 3.7 seconds making it faster than a BMW M5.

Benjamin Yonghttps://benjamin-yong.com/
Benjamin Yong is a freelance writer and member of the Automobile Journalists Association of Canada. You can find his stories on this site and in other publications including RPM Canada, Westworld BC, CAA Magazine and Darpan Magazine.
FILED UNDER:
Auto NewsAuto Show CoverageBuickChevrolet

We take a closer look at each of Chevy's small SUV and crossovers including Trax, Trailblazer & Equinox. Plus, a look at the big ones, too.
Read more
Chevrolet

Chevy’s new 2021 Trailblazer will bolster its offering in the small-SUV segment when it arrives late spring. But does the interior stack up to the hype?
Read more
Auto Show Coverage

If you're waiting out for a new 2020 model vehicle, the New York Auto Show had plenty of major world debuts, all on sale this year. From new SUVs to sedans.
Read more
Chevrolet

Another big year at the LA Auto Show with some major world debuts. We cover the big ones including upcoming new vehicles you can actually buy come 2019.
Read more
Chevrolet

Built for towing and road trips, if you like black you'll like the new 2018 Chevy Tahoe Custom Midnight offering the top features of the LS trim but with a more rugged, bolder, stealthier appearance compared to the Tahoe Custom.
Read more
Auto Show Coverage