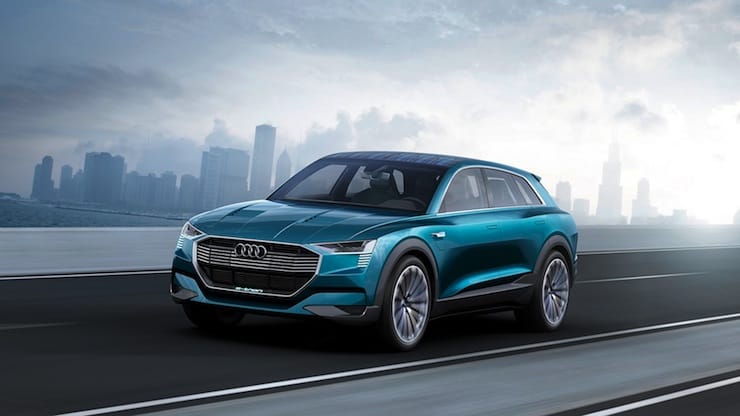 Not content to let the forthcoming Tesla Model X have the electric crossover market all to itself, Audi’s E-Tron Quattro concept previews a production model the German company says will go on sale in early 2018.

Unveiled at the 2015 Frankfurt motor show, the crossover concept is not merely a clone of the 2016 Q7: it’s a little smaller, with the most notable difference its chopped roofline. If the look suggests an emphasis on performance over practicality, Audi’s specs confirm it: three electric motors (one powering the front wheels, and two out back) provide up to 496 hp and 590 lb-ft of torque, good enough for a claimed 4.6-second sprint to 100 km/h. Tesla is promising more performance from its Model X, but Audi has much less to prove than Tesla CEO Elon Musk.

As the Quattro name and the trio of motors suggest, all four wheels are powered, with the two rear motors looked after by a ‘torque control manager’ that splits power between the left and right wheels for “maximum dynamics and stability.”

Audi says the concept’s sleek look was conceived in the name of aerodynamics, which it says helped its engineers achieve the E-Tron Quattro’s 500-km driving range. Nifty features include electrically-actuated aerodynamic elements on the hood, flanks, and rear end that adjust automatically at speeds over 80 km/h to keep wind resistance to a minimum.

The concept has wireless induction charging capability, as well as the usual wired connection, but Audi’s claim of a full charge in 50 minutes is wishful thinking with current charging technology.

Audi is mum on production model pricing, but bet on a six-figure tag when it rolls into showrooms two-and-a-half years from now. Chris Chasehttps://chrischasescars.com/
Chris has been writing professionally about cars since 2004, in print and online. He lives in Ottawa with his wife and two feline tyrants. In rare quiet moments, he can be found travelling or playing one of his way-too-many guitars. Chris is also a journalist member of the Automobile Journalists Association of Canada (AJAC).
FILED UNDER:
AudiAuto NewsAudi NewsNew Cars

Benefits and cargo of an SUV with the styling and performance of an Audi RS coupe, the 600-hp 2020 RS Q5 is the first RS-SUV to arrive to America.
Read more
Honda

Audi's 5-door coupe gets some big updates for 2020 including new design elements & enhanced driving dynamics with more torque. 2020 S7 starts at $83,900 across the United States.
Read more
Audi A Series

The Automobile Journalists Association of Canada (AJAC) has revealed the three finalists in each of 12 vehicle categories that will ultimately determine the 2019 Canadian Car of the Year and Utility Vehicle of the Year.
Read more
Audi

The 2019 R8 gets updates in all the right places with a more powerful V10, improved handling & supension, and tweaked exterior styling that's more taute.
Read more