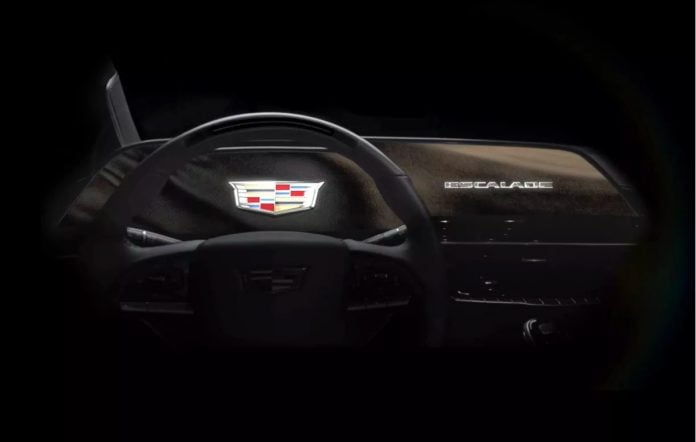 You call that a screen? This is a screen.

How fitting is it that the OG of big luxury SUVs will arrive with the largest — and by largest we mean mammoth — screen on the market by any major automaker. The next-generation 2021 Escalade makes its official debut early February 2020 in Los Angeles during Oscar week, flossing a 38-inch curved OLED display screen going west to east across the dashboard. Details provided by the American brand are slim, accompanied by a short 12-second video which didn’t explain too much. But we can tell you it will offer double the pixel density of a 4K TV and “bold imagery, perfect blacks.”  These massive cabin displays are nothing new, particularly since the Tesla Model S and Model X hit the market, along with the upcoming startup Byton with plans for a 48-inch version (though we won’t take startup car companies too seriously until we see something hit the production line). Nevertheless, Caddy knows how to go big and the Escalade has successfully carved its own niche since hitting the market in 1999 — and we know 2021 model won’t disappoint based on their current lineup of new sport utilities, from the small XT4 to new 3-row XT6. They’ve sold over 30,000 units of the big hauler globally just in 2019’s last quarter alone.

Straight lines are so last year. Introducing the first curved OLED in the industry, with over 38” diagonal of total display on the 2021 #Cadillac #Escalade. First look February 2020, available late 2020. pic.twitter.com/AoW4SvXhYA

Cadillac wants to change car buying for the digital world and it's about time. Cadillac Live is a first-to-market, personalized one-on-one shopping service.
Read more

2018 Cadillac CT6 with Super Cruise: Hands-free Driving at its Best