Cruising the 1,000 Islands in the Miata GS Roadster 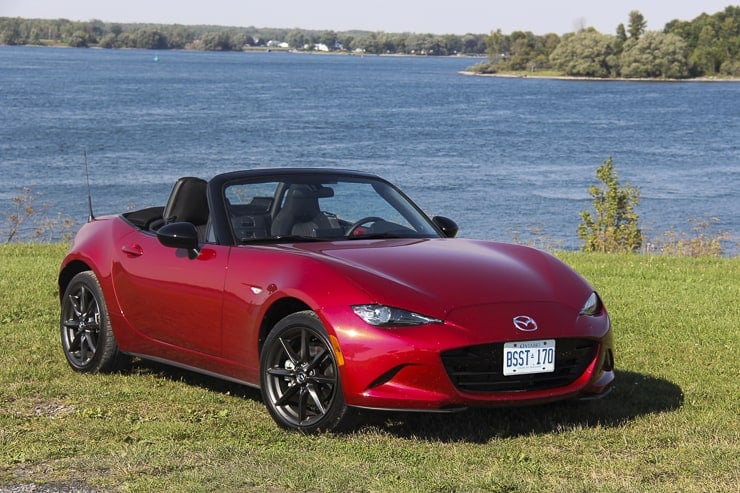 Many people seem to subscribe to the notion that the beginning of the school year brings the end of the summer, but September is often a month well suited to traveling. Free from the congestion of RVs, tourists and families on vacation, off-peak deals can be found, the water is warm and the days are often sunny while the evenings offer crisp air perfect for sleeping.

Given the launch timing of the all-new 2016 Mazda MX-5 (nee Miata), I decided to stretch its legs by going on an end of summer excursion to the 1,000 Islands in the recently revised drop top. Design similarities drawn between the M-X5 and the much more expensive Jaguar F-Type are not uncommon or unfounded. The cartoony cute Miata from days of yore that was favoured by ladies and retired interior designers has been replaced by a design that features sleeker, more substantial proportions. The fourth generation of the most successful roadster of all time is now two inches shorter while the hood and seats are lower, providing an increase in headroom and legroom

Sliding my six foot frame into the cockpit of the Soul Red Metallic roadster was inviting but snug, not unlike tying up an athletic sneaker poised for a supportive and spirited experience. Those with more substantial waistbands or proportions may find the interior cramped. I think it seamlessly balances form and function, with a utilitarian yet appealing user-friendly design that is pleasing to both sight and touch. Starting at a very palatable $31,900 for the GX model, my well-equipped GS tester rang in the register at $37,395. I’ve always been of the mindset that the only time a convertible top should be up is when it’s raining, so the first order of business was to drop the top, which is shockingly simple. Step 1: Unfasten a latch. Step 2: Manually pull back the roof and lock it into place behind you. Step 3: There is no step three. It’s actually that easy to put down. Returning the roof to its original position merely involves facilitating the aforementioned steps in reverse. All of which can be managed easily from the driver’s seat in a matter of seconds should the skies unexpectedly open up.

Engaging the push button start and sliding the shifter of the smooth and precise six speed Skyactiv transmission into first, I was on my way. Reading the technical specifications, you would be forgiven for assuming the MX-5 is underpowered, but the experience behind the wheel states otherwise. Weight of the vehicle has been reduced by over 100kg and the Miata legacy is not one built upon staggering performance numbers. The original offering boasted only 115hp and is still more fun to drive than a barrel of monkeys. The power of the 2.0-litre DOHC inline four-cylinder is down to 155hp from the previous generation’s 167 horses, but features Skyactiv technology which increases low- to mid-range torque improving fuel efficiency. Peppy and responsive without being twitchy or high strung, driving excitement and the visceral sensation of velocity come at much lower, law enforcement-friendly speeds. It’s sprightly proportions, low centre of gravity, proximity to the pavement and sharp handling dynamics make you question why anyone needs a bloated 5,500 lb musclecar with a gas-guzzling 700hp V8 under the hood. Aside from the fact that they’re compensating for something in the bedroom.

Under sunny skies and favourable September temperatures I easily inputted my destination into the navigation system on the 7-inch colour touchscreen display featuring Mazda Connect and HMI Commander then pointed east from Toronto. Favouring the 1,000 Islands Parkway over the 401 for the final leg, I arrived at the 1,000 Islands Harbor Hotel in Clayton, NY in under three hours but felt like I was a world away. Located not far from the Canadian border across the 1,000 Islands Bridge, Clayton is a quaint little piece of untouched Americana where one expects to encounter the Cleavers or Sheriff Andy Griffith.

Pointing back home after a relaxing few days in the area, I reflected on how much people miss out on by throwing in the towel before the summer is truly over. The same goes for those who opt not to experience the sublime MX-5 which just gets better with each generation.

Owned and operated by the Buffalo-based Hart Hotels, the brand new AAA Four Diamond hotel opened in July 2014 as the third installment of the Harbor Hotels brand, which also includes the AAA Four Diamond-rated Portland Harbor Hotel in Maine and Watkins Glen Harbor Hotel in Watkins Glen, New York which has become a frequent getaway for my parents over the last several years. I can see why. Once you become a seasoned, jaded traveller, few properties stand out aside from the terrific and the terrible. The rooms are well appointed and offer a beautiful view of the St. Lawrence River, the beds are comfortable, the shower was amazing and the staff was incredibly friendly making my stay there a positive, favourable experience. The in-house restaurant called the Seaway Grille features a vast patio on the waterfront and offers fabulous food paired with a selection of local beer and wines. Once the vibrant summer sun set below the water guests enjoyed after dinner drinks under the stars around contained fire pits.

The 1,000 Islands is actually somewhat of a misnomer. There are more like 1,864 islands scattered across the St. Lawrence River between Canada and our neighbours to the south but I suppose that more precise number has less of a ring to it. In addition to being a destination enough in itself, the 1,000 Islands Harbor Hotel resides within walking distance to the quaint main street of Clayton as well as within close proximity to many other attractions in the area. After having lunch on the patio at Bella’s in the sunshine I wandered over to the Antique Boat Museum – an impressive facility with a large selection of classic boats ranging from early racers and runabouts to opulent yachts previously owned and enjoyed by wealthy families in the area. Hosting boat shows, informative historical symposiums, regattas and boat building courses, the museum preserves the history of boating in the region in an interactive way that is both engaging and educational. One such artifact at the museum is a 32m houseboat named La Duchesse built in 1903 for a gentleman by the name of George Boldt, a millionaire hotelier and manager of New York City’s famed Waldorf-Astoria hotel.

Boldt’s name is well known around these parts. Not only did he coin the name of his personal chef’s new creation, the now famous 1,000 Islands salad dressing, but he was also responsible for the construction of one of the famous castles in the area. Located across from Alexandria Bay on Heart Island where the sun rises over the United States and sets over Canada, the 120 room Boldt Castle features an indoor pool, tunnels and secret passageways, a dove cote, Italian gardens and fountains, a yacht house and its own electric power generating house. Intending the elaborate castle to be a gift to his wife Louise, Boldt spared no expense on his creation until the sudden death of his beloved. He ordered the 300+ stonemasons, carpenters, and artists to drop their tools immediately and cease construction, never returning to the island himself as long as he lived. For over 73 years, the six story castle and various other stone structures were left unfinished, exposed to the elements and vandalism. Thankfully the Thousand Islands Bridge Authority acquired the property in 1977 and have dedicated millions of dollars to the restoration and preservation of the island. There are a number of options for getting to and from the island but I opted to enlist the service of Uncle Sam Boat Tours who have been operating in Alexandria Bay for over 85 years. While Clayton is a classy and casual little town, Alexandria Bay has many restaurants, bars and souvenir shops, giving it a similar vibe to Key West, Florida than Mayberry.

No matter which direction you’re coming from, the 1,000 Islands region has been a popular travel destination since the late 1800s for good reason. Located within close proximity to cultural and historical attractions, award-winning wineries along the 1000 Islands Seaway Wine Trail and more than 20 golf courses, the St. Lawrence River offers great fishing, kayaking and customizable boating tours.

Pointing back home after a relaxing few days in the area, I reflected on how much people miss out on by throwing in the towel before the summer is truly over. The same goes for those who opt not to experience the sublime MX-5 which just gets better with each generation. Suitable as an efficient commuter car, weekend getaway transportation and even track day companion, there are those who will never consider purchasing an MX-5 for fear of being ostracized and emasculated by their peers. This is a shame, because to experience this vehicle is to know pure bliss. We review the 2019 CX-5 Signature with the Skyactiv-D motor. Diesels remain a rare, costly alternative to its gas-powered siblings. Is this SUV different?
Read more
Mercedes-Benz

We hit a frozen Winnipeg lake behind the wheel of the brand's most powerful sedans & wagons. Here's a closer look at Mercedes-AMG's winter drive program.
Read more
Mazda

Fuel-sipping subcompact crossover, the stylish 2019 Mazda CX-9 makes a strong case against buying a hybrid. But does this small SUV have ample gusto under the hood?
Read more

The Intermeccanica Speedster: Our Driving Impressions