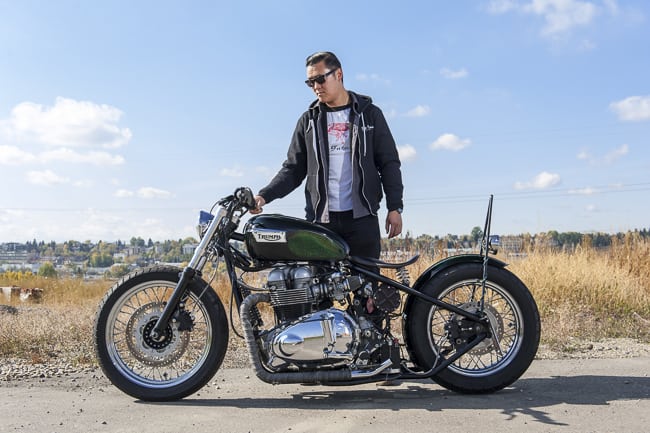 It’s hard to take a brand new motorcycle apart – in this case, a 2007 Triumph Bonneville T100 – and turn it into a custom build. All you need for motivation is a car to slam into.

Fate flicked its fickle finger and Kenny Kwan crashed his Hinckley Bonneville. A drunk in a Jeep crossed his path — with ugly results.

Kwan’s helmeted head hit the A pillar while a bar end mirror snapped and tore into his groin, narrowly missing his femoral artery. Broken right hand, collapsed right lung, stomach and liver lacerations and severe concussion were on his hospital chart; morphine helped quell the pain. “I kept asking if the bike was OK, but it obviously wasn’t given my condition,” Kwan says. A Calgary engineer, Kwan bought the 2007 Triumph Bonneville T100 new from Blackfoot Motosports. A gift to himself for passing a motorcycle safety course, the Triumph was his first bike.

“I was never really into motorcycles, but a friend asked if I’d take the motorcycle training program with her,” Kwan says. “So, I did. After we passed we wanted to buy bikes. All of the Japanese sport bikes looked the same, and the cruisers did, too. Then I stumbled across the Triumph Bonneville and I thought it looked sweet.”

Kwan didn’t instantly lay down cash as he went home to research Triumph. He learned the company’s history, and looked at an early 1970s oil-in-frame Bonneville. More of a project than an every day rider, Kwan returned to the Hinckley Triumph. “It was a brand new Bonneville with modern technology and reliability, with the styling of the 1960s bikes,” he says. Until the crash, that is. Kwan’s Bonneville suffered a snapped front end, crushed fuel tank, bent wheels and frame.

Weekdays Kwan rode his red and black Bonneville to work. Weekends, he was on the highway. “I found my calling,” he says, “I’d never felt something so good, and I never got tired of it – even when the thermometer hit 0 C – as long as it was dry, I’d ride.”

Until the crash, that is. Kwan’s Bonneville suffered a snapped front end, crushed fuel tank, bent wheels and frame. Although written off Kwan claimed the wreck. “I wanted to rebuild it,” he explains, and adds, “I’d modified the bike with a low clubman handlebar, D&D exhaust, smaller signal lights – I loved it, it was perfect to me.”

Quotes for new Triumph parts scared him, so he opted to build a custom – rigid-frame Triumph bobbers captured his fancy. Online retailers Lowbrow Customs, Biltwell and Acme Choppers shipped him critical components, including the complete rigid frame for the Hinckley twin. Working through physiotherapy, Kwan was returning to life and stripped down his Bonneville, but first ensured the 865cc engine with its 35,500 kilometres still ran. He kept the engine, hand controls, foot controls and wiring harness and binned the rest. A pair of straight wire wheels from a 2006 Triumph T100 was purchased from Mark Blundell at TJ’s Cycle wrecking yard.

After recuperating Kwan was hired as a scheduling and production engineer at a local machine shop. Learning about the Triumph, his boss suggested the CNC mills and water jet table were at his disposal. Using SolidWorks 3D software Kwan designed a triple tree based on stock Triumph measurements and milled them from billet aluminum. Shortened Triumph legs with Progressive Springs are topped with Biltwell 1” drag bar, stock Triumph controls and Bates-style 5” headlight. Brake calipers and rear rotor are Triumph while front rotor is EBC.

Kwan drew brackets and mounts in SolidWorks, cutting from plate steel those for the gas tank – which is reproduction pre-1971 Triumph from Lowbrow — exhaust, sissy bar, oil tank and cooler, sidestand and rear brake caliper. A length of 1/2” round bar was heated and bent to form a sissy bar-cum fender and No School Choppers taillight mount. Saddle and springs are from Lowbrow. For the stock Triumph headers to follow the wider Acme Choppers lower frame rails Kwan cut the mounting collars and rotated the pipes outward 30 degrees. He MIG welded them back together and hid the scars with header wrap.

Good friend Kevin Cuffley of Calgary’s Bigshot Customs TIG welded frame brackets and mounts Kwan had first tacked into position. With the bike apart, Cuffley sprayed the frame in Dupont semi-gloss black. Then, he hit tank and fender with a black base, followed by metallic green stripes and panels, finished with six coats of candy green.

During the build process Kwan established an online custom motorcycle parts business dubbed Ill-Fated Kustoms. He sells   everything he used to build the Triumph, and he’d one day like to move the company into a bricks and mortar shop. As fate would have it, the business name has nothing to do with his accident — Ill-Fated Kustoms was simply a website domain and design previously built as a school project by his business partner. Oh, that fickle finger.

Greg Williamshttp://gregwilliams.ca/
After graduating from the Journalism program at Mount Royal College in 1995, Greg Williams set out to write about powered vehicles, and more specifically motorcycles – and has been doing so ever since. This isn’t a part time gig for him. Williams has written for every major Canadian motorcycle magazine, and spent ten years with Inside Motorcycles where he penned the Western Perspectives column. He now contributes the New Old Stock column to Cycle Canada, the Pulp Non-Fiction column six times a year to the Antique Motorcycle magazine, and feature articles appear regularly in American Iron Magazine and Motorcycle Classics. His On the Road column runs weekly in the Calgary Herald Driving section and also republished Modern Motorcycle Mechanics — the motorcyclist’s bible. Greg is also the recipient of the Julie Wilkinson Motorsport Journalism Award.
FILED UNDER:
MotorcyclesClassic Motorcycle FeaturesTriumph Motorcycles

The cruiser market offers a number of choices with builders turning out new renditions of the staple motorcycles. For beginners, here are 5 best options.
Read more
Triumph Motorcycles

The Unicorn is Down: MadJap Kustoms Mythical Chopper