We chat with Ricky Forbes, star of 'Tornado Hunters' on CMT Canada and host of Woods Canada's Greatest Explorer about his life on the road with a storm-proof custom 2015 F-150 pickup. 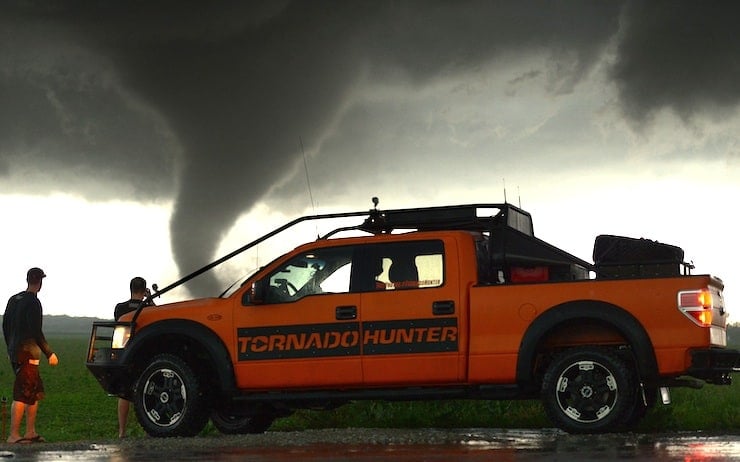 Martinsville, Saskatchewan native Ricky Forbes has always been a bit of a thrill seeker, but when the 29-year old University of Saskatchewan commerce grad decided to pursue tornados for a living, his mother wasn’t very happy.

“My parents are supportive,” said Forbes with a smile, “but I know that my mother obviously worries about my career choice. But we have a deal. I have to text her before we enter a tornado, and again when we come out. I will admit that it’s not perfect, but she would be pretty upset if she had to hear that something had happened to me on the news after the fact.”

Who are the Tornado Hunters? Ricky is one of a three-man team of adventurous individuals who make up the Tornado Hunters. The other two members are team leader and photographer Greg Johnson, and videographer Chris Chittick, both of Regina. Ricky’s main role is to do the bulk of the driving, but he is also pretty adept with a camera.

The tornado season begins as winter comes to a close and stretches well into the summer. During this period the team spends up to six months on the road chasing the treacherous storms across the United States and largely living in their specially equipped 2015 Ford F-150 pickup truck (reviewed here – without the F-150 storm proofing).

Currently the team utilizes a 2015 Ford F-150 Lariat- The ultra-popular market leader now sports an aluminum body and the latest in safety and technology gadgets. The majority of the truck is stock OEM fare, as it is robust, reliable, and easy to service while on the road. However, there have been a number of modifications made to “Flash” (the truck’s nickname) to enhance team safety and facilitate filming.

“We chose the Ford product for several reasons, but the most important one was the fact that it offers us the most room. When you have three or four people basically living in the truck for weeks on end with all of their gear and equipment, usable space becomes an issue.” “I have driven all the other brands during my time working on the drilling rigs and in mines, but as a tall guy (Ricky stands 6’5”) the Ford was the only one with enough headroom to allow me to be comfortable for spending long periods behind the wheel.”

The F-150 was selected over a Super-Duty primarily for weight and mileage reasons. In fact, there are two rival storm chasing outfits out there running tank-like vehicles that are proving too cumbersome and fuel thirsty to allow for their respective teams to actually do much chasing.

We chose the Ford product for several reasons, but the most important one was the fact that it offers us the most room.

“When we first started out we looked at using a tank, but we soon realized that if you want results we need to be light and quick to get to where we need to go. I will admit that the tanks offer excellent protection and visual impact, but they are difficult to maintain and hard to shoot from. Luckily for the tank guys we are driving the Ford as there have been occasions where we have had to tow them out of areas where they get stuck due to their awkward vehicle designs.”

The act of piloting a vehicle of any type near, or even into, a monster tornado is obviously a dangerous task, so the team has elected to fit Flash with a variety of features which help reduce the amount of damage incurred on the body of the truck as well as to help enhance passenger safety. Safety equipment includes an external roll cage (originally engineered to fit on vehicles working in the Potash mines) which incorporates mitigation bars to protect the windshield and passenger cabin from damage caused by falling trees and power poles.

“When we are storm chasing sometimes power lines and trees come down in an instant, and if we are chasing at night it is even more difficult to avoid them. In fact, this year alone we have hit two downed trees and three sets of power lines, so having the external cage and mitigation bars has probably saved our lives.”

Factory glass is used as it is optically better for filming purposes than Lexan or bullet-proof materials, and apparently the production people like the drama that comes with shattered windows. As a result the team members wear helmets and safety eyewear to alleviate some injury risk should the windows be compromised.

The truck has been coated in LINE-X, a polyurethane elastomer treatment that offers the vehicle some protection from debris that can be travelling at triple digit speeds and hits with sufficient force to impale panels or even disable the truck’s mechanicals. Cloaked in a blend of matte black and high visibility orange, the imposing Ford has plenty of curb appeal which also helps with marketing.

“We have been told that the finish is near bulletproof, and have even shot a .22calibre rifle at it to test that theory. So far so good.” The truck rolls on Baja-type General Grabber tires due to the fact that they often have to cross difficult terrain, clamber over vast expanses of debris, or extricate themselves from a ditch. Forbes says that he specifically selected them as they also perform well on the highway.

Heavy steel bumpers front and rear provide valuable collision protection, but they also provide mounting points for auxiliary lighting equipment which, when you include the additional units mounted to the top racks, allows for 360-degree illumination.

Heavy-duty steel cargo boxes are bolted to the floor of the truck’s bed. These have been custom designed to allow quick access to tripods and camera gear, but also provide the team with secure storage for their personal gear and other equipment.

The Tornado Hunters have been in pursuit of their dreams for five years, three of which they spent on their own selling pictures and videos captured during their encounters and focusing on their YouTube channel in an effort to perfect a viable business model and establish themselves as personalities.

The affable Forbes was quick to point out that the team is also ready and willing to take up the first responder role should they come across a situation where someone is in peril and obviously, assisting them takes priority over capturing a few  images or video footage.

Mr. Forbes realizes that the team is playing with fire and that there is always the potential for serious injury or even death to occur when they engage an unpredictable tornado.

“I love doing this, and can’t imagine doing anything else at this point. But I am still a young guy, and having an adventure. I am doing what makes me happy, and how many people get to say that? However, I am certain that one day I will want to get off the road and have a serious relationship and eventually, a family.”

Russell Purcellhttps://www.flickr.com/people/autoexposurecanada/
Russell Purcell is an award-winning automotive journalist and photographer based in Vancouver, B.C. His passion for automobiles was sparked at the tender age of six, when a family friend gave the wide-eyed first grader a ride to school in a track prepared Porsche 911 RSR. He continues to fan the flames by building an impressive library of automotive related books as well as a vast collection of interesting automobilia and motoring artefacts. Russell is a member of the Automobile Journalists Association of Canada, and is active on Twitter as RoadTestRuss.
FILED UNDER:
CultureCulture FeaturesFull-size TrucksFord F-150 Reviews & News