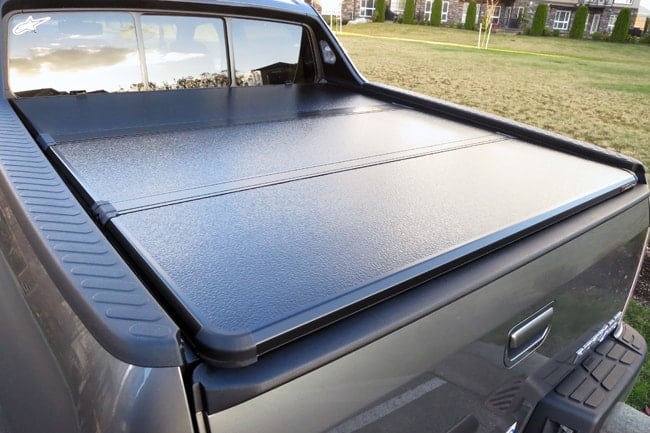 The Extang Solid Fold tonneau is a hard-shell design that is one of the best-selling tri-fold aluminum tonneau covers on the market. But we wanted to find out for ourselves.

Pick-up trucks are arguably the most popular vehicles in North America due to their incredible versatility and ruggedness. However, if you happen to live in an environment prone to inclement weather, you may wish to enclose your truck’s box with either a canopy or a tonneau cover so that you can protect your cargo from the elements.

I recently installed one of the most popular tri-fold tonneau covers on my personal vehicle, a 2009 Honda Ridgeline pick-up truck.

The Extang Solid Fold tonneau is a hard-shell design that is one of the best-selling tri-fold aluminum tonneau covers on the market. It arrives fully assembled so installation is relatively easy and can be completed by the average consumer.

The Solid Fold tonneau features a lightweight, aircraft-grade, aluminum frame and its UV-resistant panels house a sturdy aluminum honeycomb core. The innovative design of the hinges used on the Solid Fold feature special channels to keep water out, so you will have one less thing to stress about while on the road.

The exclusive clamping system has been designed so that the entire cover can be installed or removed with little effort and in minimal time. The front clamps (SafetyKlamps) are a hand tightened toggle bolt design which are situated in such a manner that they do not interfere with the amount of room available for cargo. The rear clamps (SpeedKlamps) are a spring loaded design which merely require the user to pull down the clamp’s handle and release it once it meets the bed wall flange (or in the case of the Honda Ridgeline, the provided aluminum frame rails). All of the clamps feature fibreglass reinforced nylon composite materials which are very strong and will not rust or corrode. Obviously you will want to wash your truck bed prior to installing the cover because once you have the tonneau in position you will find it a little more difficult to complete this task due to the fact that when folded, one third of the cargo box is basically still protected by the stacked structure.

If you are mounting the solid fold on a traditional pick-up truck design you simply need to place the pre-assembled cover over the cab end of the truck box. You then need to carefully unfold the three segments so that they cover the bed and adjust the unit’s position so that it is properly aligned with the truck’s cab, sidewalls and tailgate. Once you are satisfied with your placement you can then carefully refold the cover into its open position at the cab end of the box.

The next step will require you to get into the bed so that you can secure the front clamps. While lying on your back you will be able to swing down each clamp and set the toggle foot so that it is positioned under the bed wall flange. If your truck has a bed liner in place you will need to remove just enough of the liner material to ensure that the clamp is able to make proper contact with the metal surface of the bed. These clamps can then be hand tightened until they are secure. Take your time and alternate between the two to guarantee even pressure and reduce the chance of displacing the cover from its position.

You are now free to unfold the panels and close the cover. Close the tailgate to check your placement. If everything looks square and lined up you will need to drop the tailgate and reach in to the central recess of the rearmost panel to release the rear clamps. Simply slide the clamps towards the sidewall until you are near the mounting point. A simple tug towards the floor will engage these spring-loaded clamps so that you can position them so that they hook under the bottom edge of the bed wall flange. The cover should now be secure, and if your truck has a locking tailgate you will now have a secure storage space for your gear, tools and cargo.

The Honda Ridgeline is an odd-ball in the pick-up truck world as it is a mid-size truck with an unibody design. Unlike the traditional pick-up truck which features a body on frame structure where the cargo box is independent of the passenger cabin, the Ridgeline’s composite box is part of the overall body structure. The body sides are angled rather than horizontal like those on a typical truck bed so finding accessories for the Ridgeline can be a challenge. Due to the odd shape and design of the Honda Ridgeline’s bulkhead and sides the Extang Solid Fold kit for this vehicle comes with a set of supplementary instructions and a few additions to the parts list.

The presence of two full-length aluminum side rails is the first thing you notice. On a traditional pick-up design the tonneau cover sits atop the cargo box utilizing the top surface of the box walls as a foundation. This would be impossible on the Ridgeline due to its design, so the Solid Fold needs to sit atop a pair of aluminum rails that must be mounted within the confines of the cargo box.

The side wall mounting rails are easy to attach using the provided hardware (which includes two threaded bolts and a pair of sealing washers to inhibit water from finding its way in through the holes). Luckily there is no need to do any drilling as the rails are mounted using holes already provided by Honda-one is sourced from the mounting point for the foreword upper tie-down bracket which needs to be removed to complete the install, and the other involves removing a threaded bolt that is located halfway down the cargo wall which I believe is used to help support the composite box. The rails have self stick weather stripping in place to help ensure that water doesn’t find its way in along the edge, and are shaped so that a channel is provided to direct water rearwards. Extang provides the two wrenches needed to perform this step, which is an unexpected bonus.

A pair of rubber pillows are provided which feature a self-stick surface so that they can be mounted behind the side rail at the two points where you have to remove the tie-down bracket. With the bracket removed there is a small recess into which water might flow so by placing these pieces into this void the mounting rails will compress the pillows and block this opening. Up front along the bulkhead there are two rubber wedges that need to be placed in the corners to prevent water from finding its way into the bed. These wedges also feature a self-stick surface so that you can mount them underneath the mounting rails. So far I have found that the exposed portion of the wedge does a good job of directing the water flow away from this potential entry point.

Finally, there is a small square rubber pad that needs to be placed at the rear of the rail to fill another potential ingress point for moisture.

At the time of this writing I have had the Solid Fold installed for about three weeks, and during this period Vancouver has been ravaged by some pretty heavy rainfall. On the second day I noticed that a small amount of moisture had managed to get in along the bulkhead, but this was because I needed to adjust the placement of the extra wedges. Last weekend I took my truck through a high-pressure, automatic, no-touch car wash to really give it a test. Afterwards I did find evidence of a little soap at the bed’s mid-point on both sides, but after inspection I determined that I merely needed to tighten the mounting rail’s bolts a little more to improve the seal of the weather stripping.

I have to admit I am pleased with both the look and function of the Solid Fold tonneau cover. It makes my truck look tidy and provides me with much more usable “dry” cargo space. Should I find the need to haul larger items I can quickly fold the two rear panels forward and lock them in place with the integrated tie-down straps.  Should I need to haul even larger items I can remove the unit in short order without the need for tools, or even another set of hands.

Prices for the Extang Solid Fold tonneau cover vary depending on the make and model of your truck, but typically they can be found for less than C$1,000 for most applications. In my area they list at C$869.00 to start, but the Ridgeline version is a little more (C$919.00 prior to taxes) due to the cost of the extra components. Wireless charging and better materials, the Parrot Zik 3 headphones build on the popular Zik. But at a hefty price-point are they worthy? We break it down.
Read more
Tire Reviews