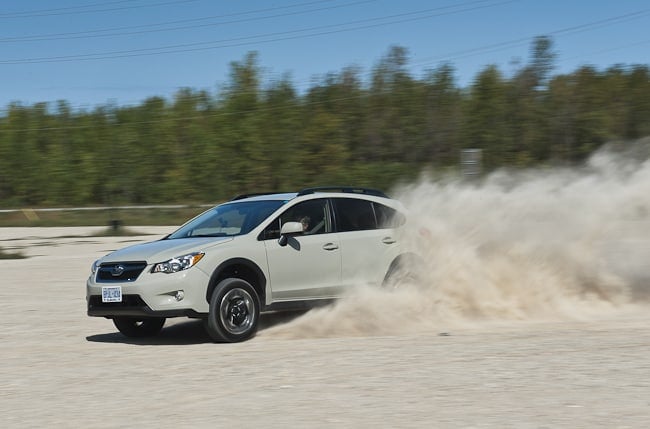 Blue Mountain, ON — For those partial to the larger, more traditional SUV offering from Subaru, the Forester, now yearning for a more compact, efficient option from the Japanese automaker, may now (finally) all lay their beady little eyes upon the all-new 2013 Subaru XV Crosstrek. Powered by a 148-horsepower 2.0-litre SUBARU BOXER engine and mated to the automaker’s renowned all-wheel drive, the XV Crosstrek is a rugged, versatile compact CUV which now takes the reigns as the most fuel-efficient all-wheel drive vehicle in North America, boasting 8.2 L/100 km in the city, 6.0 L/100 km on the highway, and 7.2 L/100 km combined with the CVT automatic transmission. All we have to say is: what took so long?!

In terms of sales and success, Subaru should do well with their new XV Crosstrek CUV; an increasingly growing crossover market in a dismal economy warranting fuel-efficiency over sparkly gas-guzzlers, coupled with Subaru’s incredibly loyal owner-base who evidently never sell their Subies, indeed should, and likely will, take a closer look at the XV Crosstrek. And for the weekend-warrior CUV-shopper with a more active lifestyle but not completely familiar with the Subaru brand, should certainly jump into the mix as well. All three 2013 Subaru XV Crosstrek trims are offered in either 5-speed manual or CVT automatic transmission, available in these three trims: With considerable emphasis on stylish design, while maintaining the CUV functionality, the 2013 Subaru XV Crosstrek is a true design statement from the automaker–stepping it up on the exterior-styling front with the recently announced 2013 Subaru Legacy and 2013 Subaru Outback, the XV Crosstrek serves as the exclamation point. Perhaps a glimpse at company’s new design cues? Seeing as Subaru is looking to enhance its global brand while targeting the large Gen-Y demo (I forgot they can now drive…that’s how old I am…and I’m not that old), the Forester’s all-new Crosstrek sibling will likely make an impact.

Low shoulderlines from front to rear renders a sleek, more refined look while improving visibility. The long hood curves down into a slender hexagonal front grill between cool looking hawk eye-style headlamp clusters. The black cladding along the outside wheel-wells adds just enough bravado without overdoing it (as some cheesy CUVs on the market have done…though they’ve gotten better as of late).

The front-end appears more refined and sleek with an element of edgy and outdoorsy; the same is true for the upper rear, but further down the large black plastic panels behind the rear wheels, and the angled, carved-out design element between these two plastic parts, kind of deviates from the overall sleek yet rugged XV Crosstrek image. Some will like it, while others will not. Personally, I feel a more subtle, cleaner treatment is warranted. Subaru has really opened up the cabin; emphasizing greater visibility adds more glass and helps reduce dead angles. Lower shoulderlines, larger side mirrors, and an A-Pillar cross section optimized for better front-corner visibility, all help bring the outside world into the cabin.

Throughout the cabin, the 2012 XV Crosstrek finds storage compartments. From gigantic front side door storage cavities to a large glove compartment capable of holding way too much stuff, theres a place for everything.

But it’s smart. And there’s nothing more annoying than cockpit open storage areas barely too small or barely just too narrow, rejecting my phone to comfortably rest. Well, the XV Crosstrek finds cell-phone sized side door cavities, just next to the power window/door buttons on the door armrest. Hallelujah. Even the centre console is geared for practicality, finding a card holder, pen and paper holder, and for good measure, space for a vertical tissue box.

Clearly, 2013 Subaru XV Crosstrek ranks interior storage high on the list. Hence, rear cargo storage is equally as impressive, finding 632L of cargo volume…in other words, you can stuff a couple shopping carts in there. Without removing the spare wheel, the cargo area can fit 3 golf bags. That’s good enough for me. Rear also finds 60/40 split-fold down rear seats. ON & OFF THE ROAD

The XV Crosstrek’s 2.0L DOHC engine is tuned for responsiveness with a focus on torque in the low and mid-speed ranges producing 145 lb.ft of torque at 4200 rpm. The 148-hp output coupled with the torque is adequate on the open road, but when traversing the steeper, off-road hills, we found our XV Crosstrek could use a little more power. But hey, for a compact CUV under $30k, with permanent all-wheel drive, the XV Crosstrek isn’t designed to conquer mountains. Nor should it be. At this price-point, the Crosstrek is great value.

With a higher stance than most CUVs on the market, in part to the four-wheel fully independent suspension, the 2013 XV Crosstrek’s 220mm ground clearance provides great visibility and confidence in off-road situations. Vibration is reduced due to a high-strength suspension setup and the double-wishbone rear suspension. Plus, for 2013, the 2nd-generation Lineartronic CVT transmission (available on three trims) is now quieter due to this improved vibration damping.

Handling is further enhanced: the XV Crosstrek’s light-weight design renders a more limber and agile drive. Compared to the long list of AWD competitors, including the 2013 Mazda CX-5 AWD, 2013 Hyundai Tuscon AWD, and 2013 Jeep Compass AWD, to name a few, the 2013 Subaru XV Crosstrek boasts the lighted curb weight of them all. 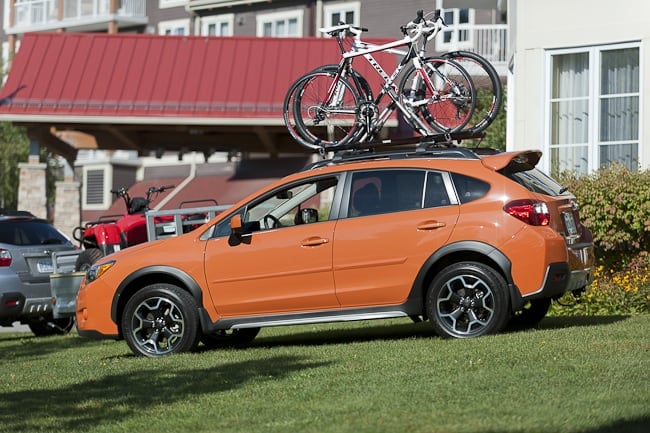 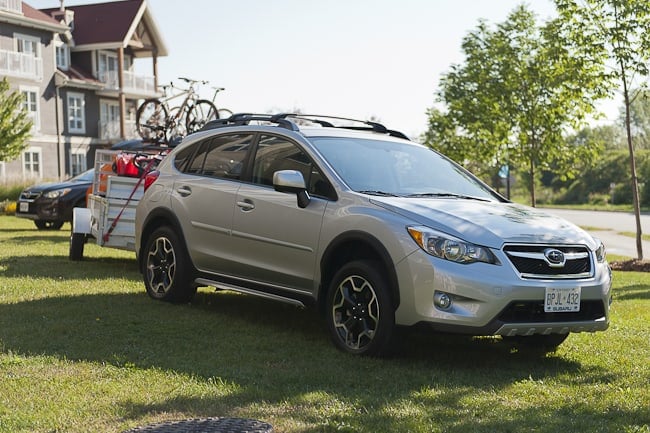 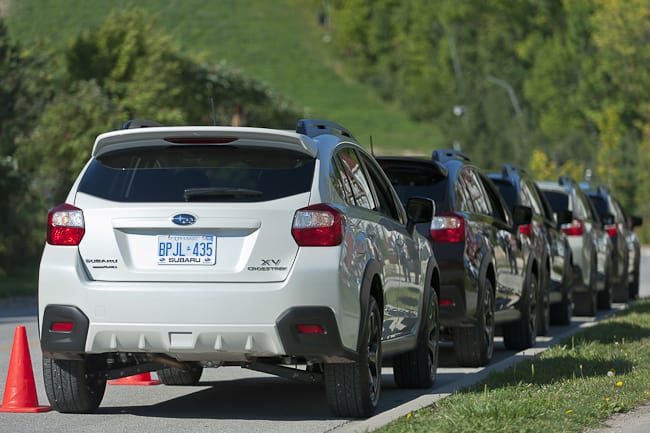 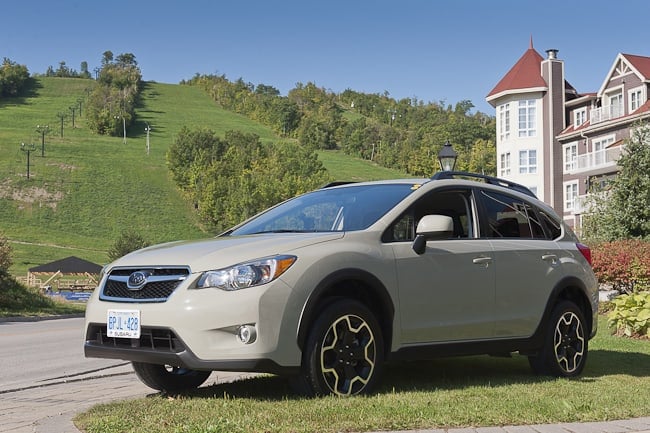 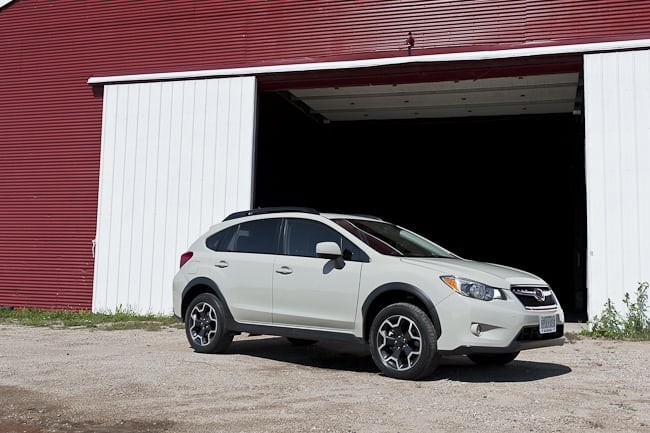 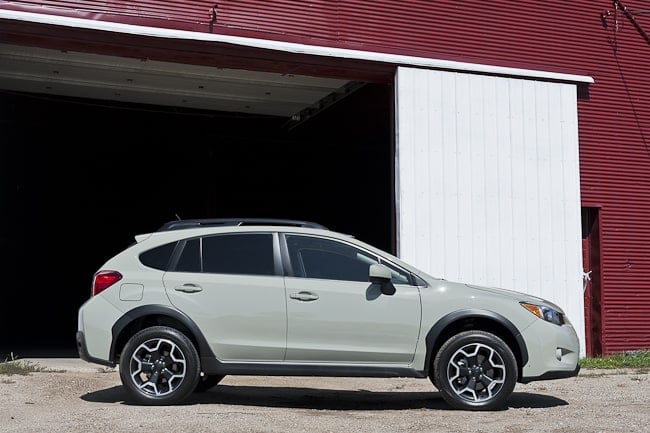 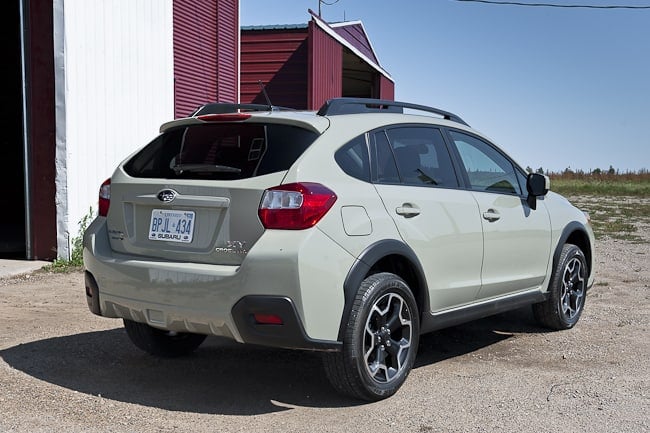 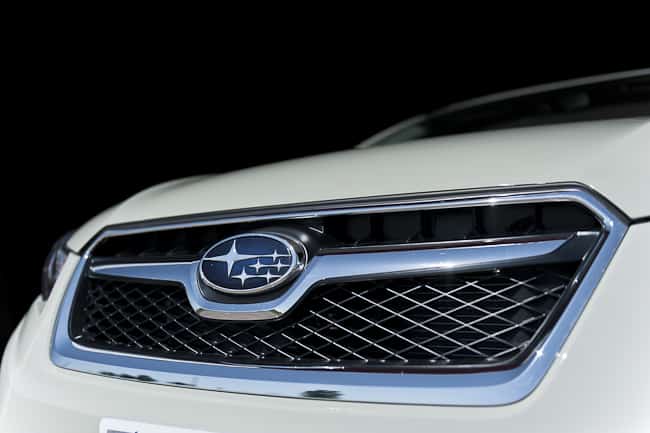 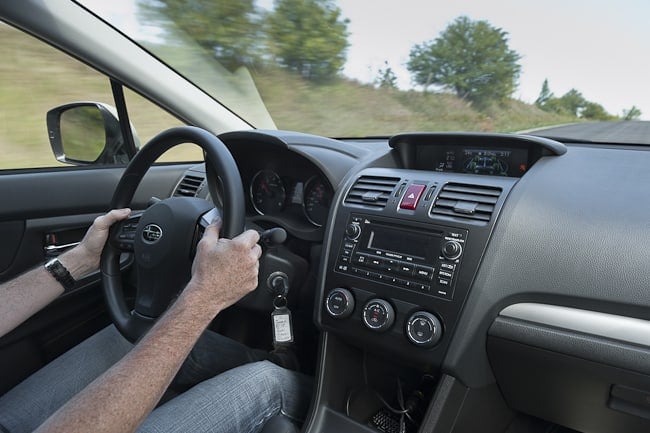