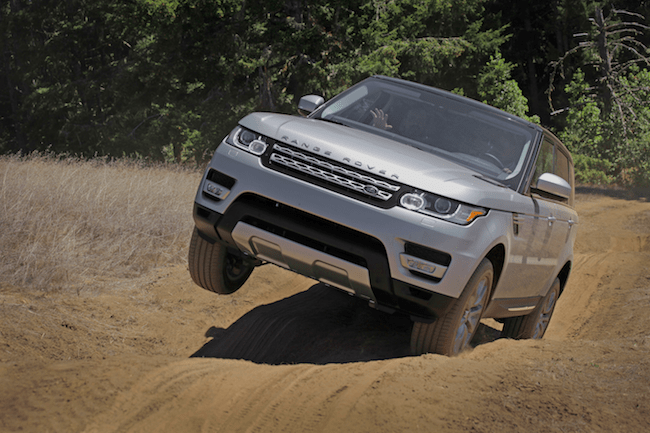 Off-road ready speed monger – Mark Hacking’s back from California with this impressions of the new 2014 Range Rover Sport.

Menlo Park, California — Every car fanatic in the world probably also has his or her own favourite sports SUV. I know I’ve been involved in discussions where people will defend the BMW X5 M or the Porsche Cayenne Turbo or the Mercedes-Benz ML 63 AMG until they run short of breath.

I’ve heard people wax profound about the off-road readiness of the Volkswagen Touareg and the Jeep Grand Cherokee until the point has been hammered home like a pile driver. Each of these vehicles is, in its own way, worthy of inclusion in the conversation. But the conversation starts and stops with the all-new Range Rover Sport.

Developed in parallel with the recently released Range Rover, the Sport offers the greatest breadth of capability of any sports SUV on the planet—and the manufacturer has the facts and figures needed to back up that claim.

First, the new offering benefits from the same aluminum construction as the Range Rover and the accompanying weight loss over the previous generation—pegged at some 340 kg. This sets the stage for performance gains in all areas: better acceleration, better fuel efficiency and a more robust chassis perfectly suited for serious off-roading. They have different 4WD systems with the V6 sporting a Torsen centre differential and single-speed transfer case, while the V8 features a brand-appropriate two-speed transfer case with low range. Also, the V8 is the only RR Sport to come equipped with a dynamic mode for the vehicle’s terrain response system, paddle shifters to operate the 8-speed automatic transmission and a guttural exhaust note that is all business. In peeling around the Santa Cruz Mountains in NoCal, the V8 was more responsive, more engaging and just plain more fun. Many bystanders would argue that the V6 is the version that makes the most sense. For sure, t’s more fuel-efficient, less expensive and, really, who needs a mammoth SUV to be able to tear up roads like a finely tuned sports car? However, I can tell you in no uncertain terms that the V8 is the one that real driving enthusiasts will pick every single time.

In peeling around the Santa Cruz Mountains in NoCal, the V8 was more responsive, more engaging and just plain more fun. In its defense, during a two-hour off-road excursion, the V6 proved the inherent excellence of Range Rover engineering.

The wheels articulate over all manner of obstacles. The trick on-board camera system allows for a 360-degree view of anything that might get in the way. The terrain response system provides settings for all sorts of hostile conditions or an automatic mode that does all the thinking for you. Other gizmos such as hill descent control and the traction control kick in on an as-needed basis.

Net effect: The Range Rover Sport keeps climbing, keeps moving and never ever gets stuck—despite the fact that it rides on tires meant only for paved surfaces. I’ve seen this routine from Land Rover a handful of times before, so I’m no longer amazed by it—but it is amazing nevertheless.

As might be expected, this level of engineering from one of the most storied brands in the business doesn’t come cheap. I haven’t event mentioned the luxury features of the Range Rover Sport because, as with its ability to climb mountains, it now goes without saying that those bases are covered as well.

Mark Hackinghttp://www.markhacking.com/
Mark Hacking is an award-winning car, motorcycle and motorsports journalist whose work has appeared in Azure, enRoute, Intersection, NUVO and Toro, among many others. He is the former editor of Performance Racing News, the former managing editor of DRIVEN, and a member of both the Automobile Journalists Association of Canada and the Motor Press Guild of California. An avid racer, Mark is a three-time podium finisher at Targa Newfoundland and, this past season, raced in the VLN Series at the Nürburgring with the factory Aston Martin team. His motto in life: Drive fast, take chances.

What's the difference between the Telluride and Sorento SUVs? Kia's two big sport utiities offer cargo, capability, and tech but are not alike in many ways.
Read more
Land Rover

If celestial bodies & special edition luxury SUVs are your thing, the Range Rover Astronaut Edition, based on the Autobiography, is calling your name.
Read more
Mitsubishi News