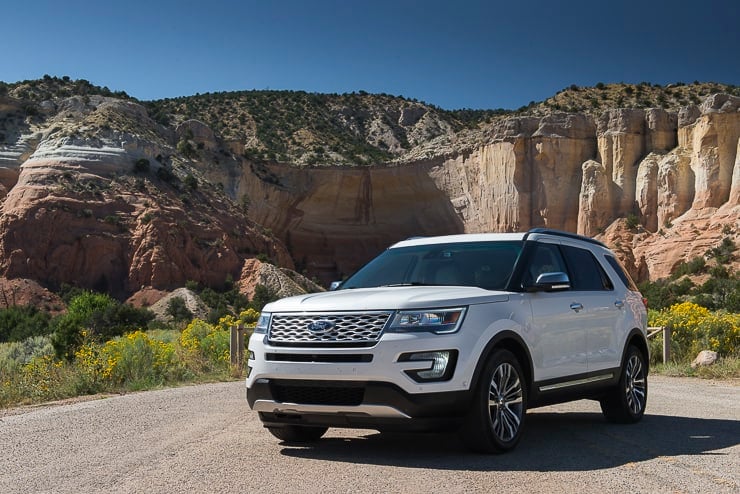 We explore with the all-new 2016 Ford Explorer Platinum Edition on a journey through the Canadian Rockies from Kamloops to Calgary plus a road trip through New Mexico from Durango, CO to Albuquerque. The Ford Explorer has long been a staple in the automotive marketplace, and in fact, could easily be considered the foundation for the SUV segment.  After 25 years and sales of over seven million units, the product planners at Ford are seeking to broaden their customer base by adding a top-level Platinum trim level to the venerable people hauler.

The seventh generation Ford Explorer will continue to be a market leader, as it now features more room, better performance, improved fuel-efficiency, and the availability of a wide array of comfort, safety and entertainment features.

The company is marketing the Explorer as the perfect for active families looking for adventure. After spending a couple of days on a late summer road trip through the scenic Rocky Mountains of British Columbia I am happy to report that Ford’s marketing strategy is right on target. In 2011 Ford designers moved to a unibody construction which gave the Explorer a more car-like ride and handling characteristics. This transformation soon made the vehicle the dominant player in the market as consumers were attracted to the comfortable ride and predictable handling.  Add to this one of the automotive world’s most spacious and roomy passenger cabins, and you can see why so many Canadians choose to put an Explorer in the garage.

The 2016 Ford Explorer features more linear steering which facilitates placing it where you want it on the road and keeps the vehicle tracking straight and true. I found it easy to carve rather aggressive lines through tight mountain roads in the vehicle, and at no time did I get a sense of the vehicle losing traction or feeling ungainly or unsettled.

At first glance you might not notice that the 2016 model has changed much with regards to exterior styling, but in fact, the changes are substantial.  The vehicle is all new from the A-pillar forward, and the D-pillar rearward. There is new rear and front fascias, body cladding, and wheels, and the rails of the roof rack are now integrated into the design. The 2016 Ford Explorer is a modern, fully capable full-size sport utility vehicle that has been engineered to maximize fuel efficiency and deliver healthy performance. My test vehicle featured the 3.5-litre twin-turbo V6 EcoBoost engine under the hood – a power plant that produces a generous 365-horsepower and 350 foot-pounds of torque. These are class leading numbers, and power delivery is made to all four wheels via a smooth shifting six-speed automatic.

This is the largest of the two engines offerings available for the Explorer line, and is only available on the higher trim Sport and Platinum models. Don’t worry though, as the lower priced value trim packages still offer plenty of punch, as these vehicles feature a 3.5-litre V6 engine that delivers an impressive 290 horsepower and 255 foot-pounds of torque, or a turbocharged 2.3-litre EcoBoost inline four-cylinder engine that offers 280 horsepower 310 foot-pounds of torque.  One thing is certain, all Ford Explorers have more than sufficient power to make operation of the vehicle with a full complement of passengers and gear stress-free.

What is the Platinum Model? The Platinum model is the new top-tier offering to the Explorer catalog, and it was planned and outfitted based on customer demands. It appears that the Ford Motor Company was failing to capture its fair share of luxury buyers who demand all the electronic goodies, safety equipment and comfort features and are willing to pay a premium to have them.

As a result, the Platinum model includes proven technologies like Ford’s Intelligent Four-Wheel-Drive with Terrain Management, BLIS, Cross Traffic Alert, Adaptive Cruise Control, Lane Keep Assist, and the inflatable rear safety belts.  Enhanced Park Assist with Side Protection is on board and the vehicle is equipped with front and rear cameras to help alleviate parking and maneuverability concerns that come with the operation of such a large vehicle in tight urban environments. During my two-day trip through the Rocky Mountains and beyond the Explorer Platinum proved to be a competent touring machine, and I must admit how surprised I was to learn that somehow the engineers at Ford have blessed it with the ability to deliver a very well-rounded and fulfilling driving experience. This is an uncommon trait in a large sport utility offering from any camp. The 2016 Ford Explorer features more linear steering which facilitates placing it where you want it on the road and keeps the vehicle tracking straight and true. I found it easy to carve rather aggressive lines through tight mountain roads in the vehicle, and at no time did I get a sense of the vehicle losing traction or feeling ungainly or unsettled.

Ford has knocked it out of the park with this one, and I suspect that the competition will take notice and have to react quickly, but with a starting price of $58,599, the Explorer Platinum is a relative bargain in this segment.

Russell experienced the new 2016 Ford Explorer Platinum on a journey starting from Kamloops, BC through The Rockies ending in Calgary, AB. Amee flew into small ski town Durango, CO then spending the day driving through majestic New Mexico ending off in Albuquerque – where he bought lots of hot sauce and a Breaking Bad apron. Russell Purcellhttps://www.flickr.com/people/autoexposurecanada/
Russell Purcell is an award-winning automotive journalist and photographer based in Vancouver, B.C. His passion for automobiles was sparked at the tender age of six, when a family friend gave the wide-eyed first grader a ride to school in a track prepared Porsche 911 RSR. He continues to fan the flames by building an impressive library of automotive related books as well as a vast collection of interesting automobilia and motoring artefacts. Russell is a member of the Automobile Journalists Association of Canada, and is active on Twitter as RoadTestRuss.
FILED UNDER:
SUV and Crossover Reviews2016 SUV and Crossover ReviewsNew CarsCar ReviewsFordFord ExplorerFord ReviewsFord Explorer Reviews

Buying a used small SUV or compact crossover is challenging with so many choices. Here are the best models to consider based on value, design & reliability.
Read more
Ford Explorer

Ford's mid-size SUV is all-new for 2020. Looks great but what's the new Explorer's towing capacity? How does it compare to competitors? Here's a breakdown.
Read more
Ford

What's the difference between the Telluride and Sorento SUVs? Kia's two big sport utiities offer cargo, capability, and tech but are not alike in many ways.
Read more
Ford Explorer