More family-focused, Land Rover's redesigned full-size 2017 Discovery is still all about the adventure. 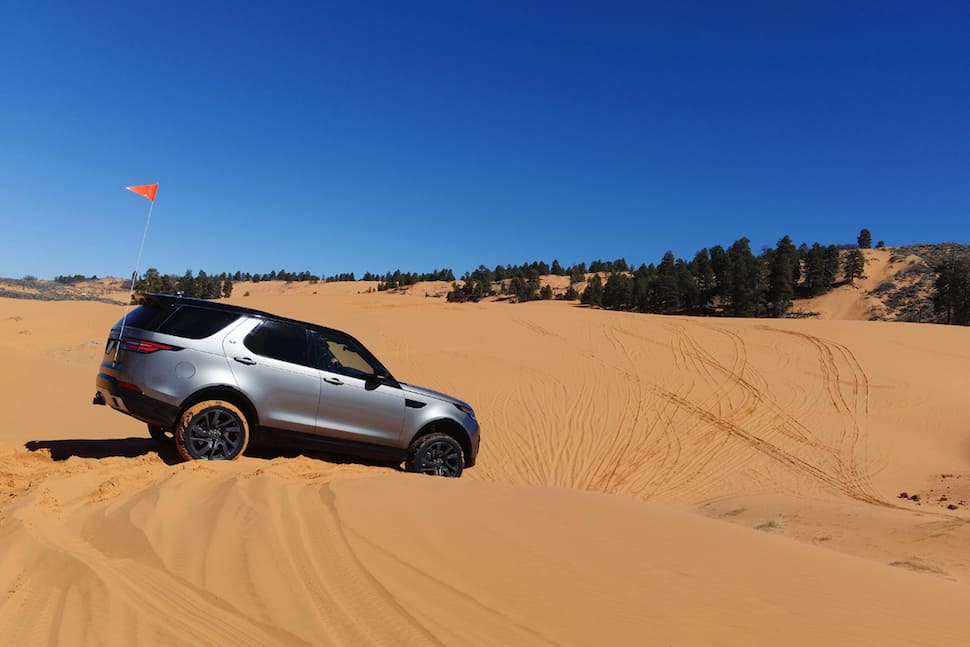 Utah, AZ – Nearly 30 years and five generations later, the Land Rover Discovery is clearly not the same vehicle it was at the start. Yet, looking at the redesigned 2017 version, even with all its smooth lines and fancy electronics, it somehow still is. Perhaps the same could be said about the new 2020 Defender.

Tradition and heritage are thrown around a lot when talking about the luxury mid-size SUV, because over the years the model has developed a legion of fans across the world for its classically handsome appearance and serious penchant for going off-road.

The Discovery retains select design elements from its predecessors, such as the characteristic angular A-pillar and flat, boxy roofline prevalent throughout the lineage. Everything else, however, either improves on prior concepts or breaks the mould entirely.

The headlamps undergo one of the most drastic changes becoming a sliver of their former selves, although they haven’t been slimmed down quite as much as the units on the Evoque. Inside, curved LED DRL’s show off the modern signature pattern. The metal mesh grille is nearly equally as skinny, not reaching down far past the bottom edge of the light housings.

The side of the SUV borrows a few items from its smaller sibling the Discovery Sport, namely the notched contrasting wheel arch flares that connect to the rest of the blackened lower bodywork.

Perhaps the biggest visual indicator of innovation and evolution on the vehicle is at the back, particularly when compared to the 2016 Discovery Sport HSE LUX. For the first time, Land Rover has done away with a two-piece tailgate, opting for a cleaner single-panel unit yielding a larger opening for luggage as well as more effective shelter during inclement weather. A powered cargo floor extension is included that, folded out, prevents scratches to the bodywork when loading and unloading, and acts as a handy seat to boot.

The Cabin and Cockpit

After my co-driver and I spent a couple of days behind the wheel covering in excess of 500 kilometres, I got to really know the interior, especially the InControl Touch Pro infotainment system. Everything from entertainment to navigation to vehicle information, down to a graphical representation of the suspension and differential movements while off-roading, is shown and manipulated via the widescreen touch-sensitive monitor.

There are seven seats in the cabin, all endlessly configurable using automatic switches. Smartphone saavy users can also download the companion app and adjust the positioning remotely on their mobile device.

Here’s a look inside (photos by Land Rover): 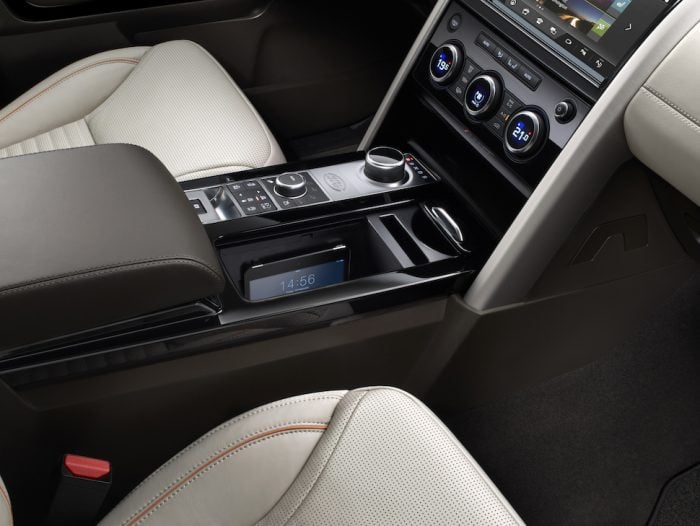 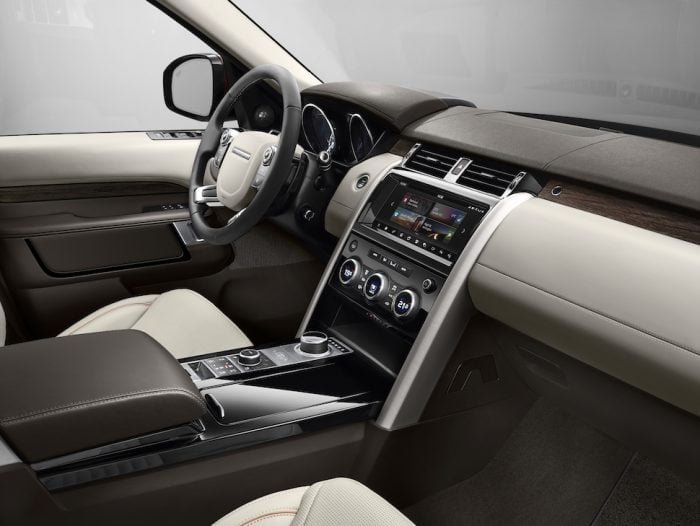 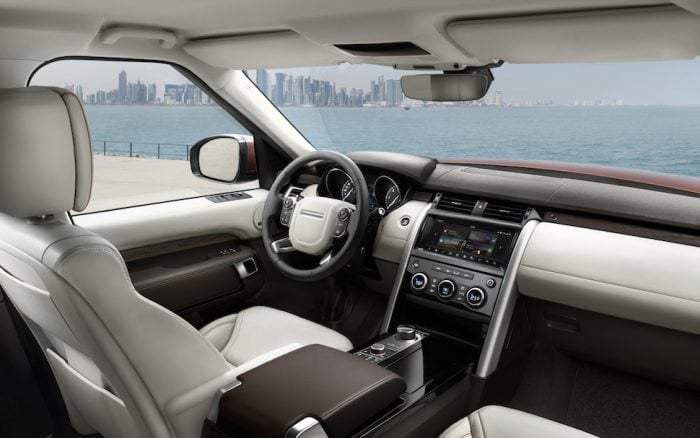 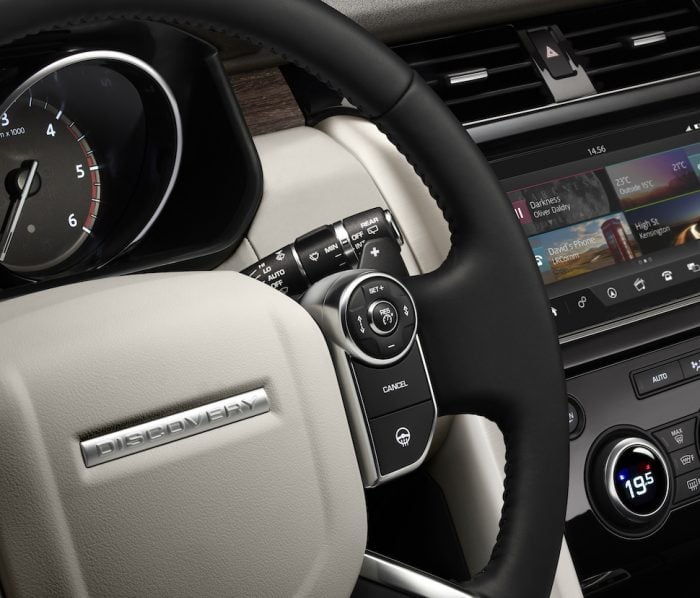 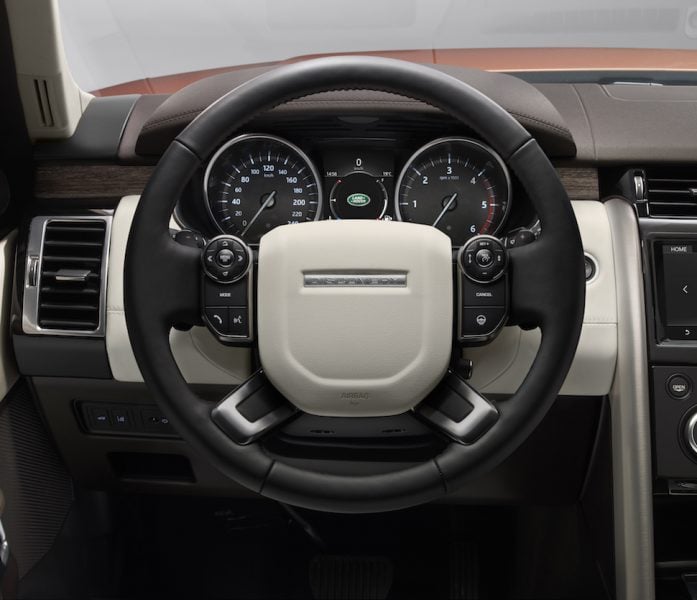 Before getting back to talking about how the Disco performs off-road, an introduction to the powertrains. Two 3.0-litre V6s are available, one a turbocharged diesel producing 254 horsepower and 443 lb-ft of torque, the other a supercharged gasoline engine making 340 hp and 332 lb-ft of torque, both mated to ZF eight-speed automatic transmissions.

The former, unsurprisingly, offers up the most low-end grunt thanks to its monster torque, but fizzles out at higher rpms and has the characteristic lumpy diesel noise, albeit subtle, under load. The latter mill with its linear delivery would be my choice for a daily driver, unless I had to frequently tow.

The absolute highlight of the trip had to be the extensive testing done off the beaten path. Boasting 282 millimetres of ground clearance — 43 more than the LR4 — nothing, as we experienced, stands in its way, be it logs, ruts or rocks. The SUV features Terrain Response 2 technology, optimizing traction for different environments like gravel, grass, snow, mud and so on. The real beauty of the system is the automatic mode capable of switching modes on the fly when the multitude of onboard sensors detects changes in surface conditions.

Takeaway: is the 2017 Discovery worth it?

Land Rover has managed to accomplish a tricky task, which is to reinterpret a classic by keeping the vehicle’s well-loved attributes intact and at the same time giving it a contemporary makeover. I’d say the brand has managed the job well, and this should prove to be a good buy so long as all the complicated gadgetry stays working past warranty.

The all-new 2017 Land Rover Discovery will be sold in three trim levels: SE, HSE/HSE Td6 diesel and HSE Luxury and should hit stores by mid-2017.