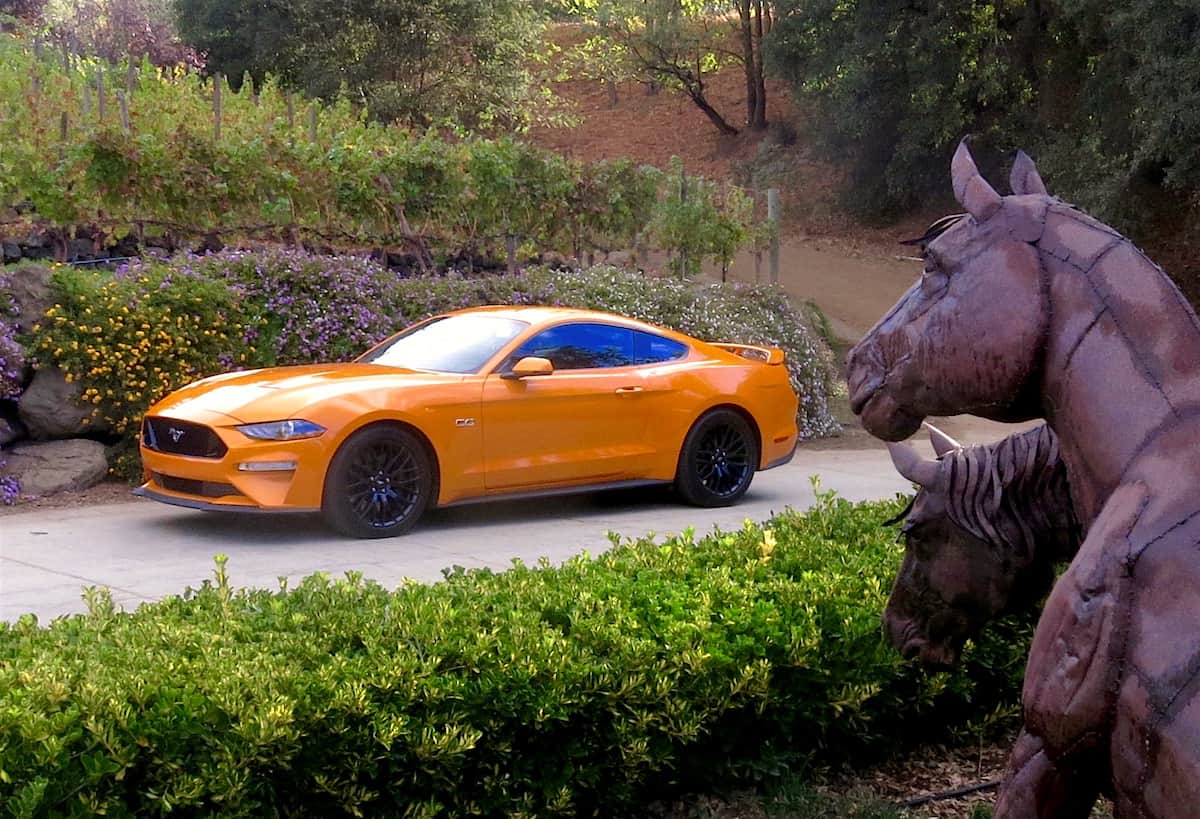 North America’s top-selling sports car continues to evolve, bridging the gap between itself and the beastly Mustang GT350 with features like MagneRide. We throw Ford’s new V8-powered, 460-hp 2018 Mustang GT into some twisty California roads to see how it performs.

MALIBU, Calif. — The 2018 Ford Mustang is putting on a lesson in trickle-down economics.

Sure, the theory may not always translate successfully into practice as government policy, but it’s working wonders for the Mustang.

A number of technologies developed by Ford’s skunkworks division — Ford Performance — have made their way down from the GT350 to the Mustang, including, and perhaps most impressively, the MagneRide variable damping system.

“I think it’s great for us to have Ford Performance out there blazing trails for us,” said Carl Widmann, chief engineer for Mustang.

“That’s a big part of what those guys do for us, particularly when it’s on the same platform. It really can be applied to larger audience.” Widmann pointed to three key things that came down from the GT350: MagneRide, the Michelin PS4 tire and the active exhaust, which has three settings, including quiet mode for driving through the neighbourhood late at night or early in the morning. It also has normal and sport mode.

(You can program the car to always operate in quiet mode between certain hours, too.)

He said if you want to predict the future, look at what a carmaker’s skunkworks division is doing. What you see on future GT350s may well show up a few years later on regular Mustangs.

The MagneRide is especially effective. The system monitors vehicle parameters 1,000 times per second, and adjusts the rate of damping instantly, to counter roll, to eliminate squat or dive and to match the performance of the suspension to driving conditions. Drive it hard — or select the sport+ suspension mode — and it will tighten up and restrict wheel movement. Drive it normally and it will set itself up for a comfortable ride. Turn the steering wheel and the dampers on the outside of the turn will respond.

Particularly interesting is Drag Mode: here, the dampers load compression on the front, and unload it on the rear, causing the car to sit in a squat configuration to maximize weight over the rear tires. If applied on a car with the automatic transmission, this squat plus changes to the shift patterns, brings the car down to four seconds, 0-60 mph.

On the Road: Driving Impressions

Latigo Canyon Road is one of SoCal’s best driving roads, with 10 continuous miles of twists, turns and hairpins. It’s hard to imagine ever getting bored driving this road, which might be why most homes along here sell for upwards of a million dollars.

It’s also why it’s one of the most popular roads for media ride-and-drive events. I had the pleasure of winding out the new Mustang GT with the performance pack, and why I mourned the end of the drive. The new GT is clearly the best handling GT ever. There was no roll. If a corner tightened up, more steering didn’t upset the car. No squeals, no slides, no roll. The five-litre V8 in the GT also gets some love handed down from Ford Performance, including discarding the previous engine’s cylinder liners and replacing them with the spray-on cylinder lining system from GT350. That increases the bore, which increases torque, to 420 pound-feet.

The new V-8 delivers 460 horsepower, and thanks to that active exhaust, delivers a veritable symphony through the tailpipes.

While the notion a lighter engine provides for better handling holds true, in Mustang it only applies to cars without MagneRide. Comparing the handling between a 2.3-litre without MagneRide and a V-8 with MagneRide is no comparison: despite the weight, MagneRide more than makes up for the difference.

Lost in the shuffle is the previous model’s V-6 engine. Instead, Mustang comes to the party with only two engines, the V-8 from the GT and the 2.3-litre Ecoboost four-cylinder. That engine has increased in power and torque to 310 horsepower and 350 pound feet.

Both engines come with either six-speed manuals or 10-speed automatics. Widmann said the GT with the automatic now gets zero-60 down in the four-second range while the Ecoboost hits it in sub-five seconds.

For the manual transmission, Ford has moved to a dual-plate clutch, which dramatically reduces the amount of pedal force needed to disengage the clutch. That’s another trickle-down from Ford Performance, this time from the Focus RS.

That makes the Ecoboost especially attractive given the fuel economy story: the GT’s combined fuel economy is mid-to-high 12 litres per 100 kilometres while the Ecoboost’s worst is 10.3, in either the convertible or the coupe with performance pack.

While the notion a lighter engine provides for better handling holds true, in Mustang it only applies to cars without MagneRide. Comparing the handling between a 2.3-litre without MagneRide and a V-8 with MagneRide is no comparison: despite the weight, MagneRide more than makes up for the difference.

It’s worth noting MagneRide is also available on the 2.3, however.

Mustang is the top-selling sports car in North America and these new changes are likely to keep it on top, by a wide margin. Kelly Taylor
Kelly Taylor has been writing about cars since 2000. His favourite ride has been the Audi R8 from Thunder Bay to Winnipeg, where he nearly traded the car for a Ford Ranger, a Greyhound Bus and the Blue Heron Gift Store in Kenora, Ont.
FILED UNDER:
Ford CoupesFord Mustang Reviews & News