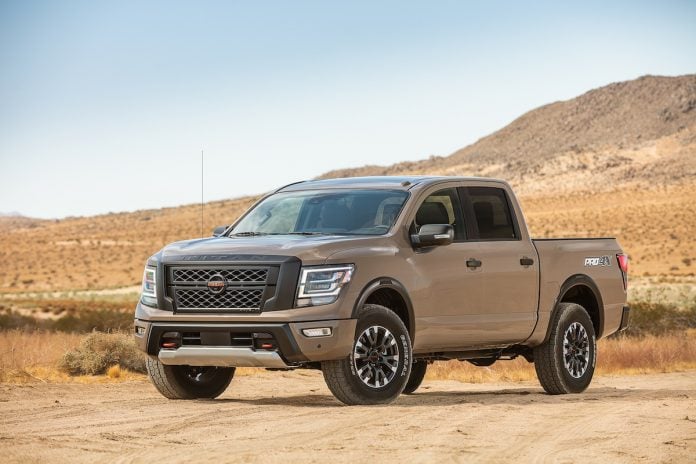 Summit, UT – The Titan full-size pickup has been a venerable workhorse for Nissan, but age has been catching up with it. Introduced way back in 2003, it didn’t get its first model update until the fall of 2015.

That second generation Titan gave the line a much-needed cosmetic lift, but did little to help the brand gain inroads against the Detroit Three, which are battling it out for pickup supremacy. So, four short years later, a more dramatic refresh is coming out of Nissan’s factory in Canton, Mississippi.

The update comes at an important time for Nissan, which has seen Titan sales drop in the U.S. by nearly one-third this year. In Canada, the brand holds just 0.5 per cent market share. Time for some bold action.

And, although this is a “refresh” rather than a clean-sheet redesign, the changes are substantial and impressive. Nissan says it invested US $230 million in this development, and it’s money well spent. The changes put this pickup back into the hunt for weekend warriors who are looking for a niche product that puts the accent on looks and comfort.

The Titan comes in king cab and crew cab configurations in the U.S., and crew cab only in the Canadian market. Four-wheel-drive is an upgrade south of the border, but is standard in Canada. The only box offered is 5’5”, although a larger box is offered on the heftier XD pickup truck.

Although the frame and undercarriage is largely unchanged, Nissan made extensive improvements to appearance, comfort, performance and safety in this update. It is unquestionably the best-looking of the pickup’s three generations, and it has a broad range of new high-tech safety features, such as lane-keep assist and front- and rear-collision avoidance braking.

There is only one engine available on the Titan: the 5.6-litre V8 gasoline engine is carried over from the previous model, but with 10 more horsepower. It is now rated at 410 horsepower and 413 lb.-ft. of torque – enough to give the truck a rated towing capacity of 4,178 kilograms. The engine can run on regular gas, but power is enhanced when it is fueled with premium.

The styling theme is called Powerful Warrior, and it truly sets the Titan apart from the competition. Its headlight, taillight, grille and wheel treatments pay homage to the angularity of warrior armour. Function also follows this form: the low-beam headlights put out more than twice the light of the previous models, while reducing glare to oncoming drivers.

Inside, the cabin is calm and quiet. The leather seats and accents in the Platinum Reserve and Pro-4X editions (the latter as an option) convey a premium feel. Two lower trim levels are also offered with cloth seats – the basic S and SV.

With laminated sound-deafening glass in the windshield and front door windows, there was virtually no wind noise and no need to raise your voice at highway speeds of 110 km/h, optimizing the experience with the premium Fender audio system.

The premium models we tested have the ultra-comfortable and good-looking zero gravity front seats. The cabin is one of the quietest of any pickup on the road. Gauge and instrument layout is clean, intuitive and are high-tech without being garish. Indeed, the round speedometer and tach harken back to a simpler time.

Perhaps the most welcome change of all to the Titan is the addition of a new nine-speed transmission. With closer gear ratios, it keeps the V8 on its peak power and enables it to pull full-size trailers or heavy cargoes without breaking a sweat.

Sadly, for budgetary reasons Nissan dropped the Cummins diesel option in the previous model and is not bringing it back for 2020. But the combination of the new tranny and a final drive ratio of 3.9 enable the truck to haul a 2,200-kilogram Airstream at freeway speeds without breaking a sweat.

Suspension was softened to give city dwellers more of the comfort they crave. That soft suspension delivers a car-like ride but allows the truck to bounce and wobble when towing or carrying heavy payloads. Thankfully, electronic trailer stability control keeps the bounce in check.

A big question is how the refreshed Titan compares on value to its competitors. We like what we see, but won’t be able to answer the value question until prices are announced later this year.

The good news, though, is that Titan won the 2019 J.D. Power Initial Quality Survey, signalling a leap forward for the automaker. It also offers a five-year/160,000 kilometre bumper-to-bumper warranty in both Canada and the U.S. (100,000 miles).

If you’re a mostly city/highway and occasional weekend warrior who puts the emphasis on looks and comfort, then this updated Titan might just tick the right boxes.

Doug Firby
I am a communications generalist with more than four decades of experience in online, blogging, newspapers, radio and magazines. I'm also a gearhead and an outdoor enthusiast. I write on cars, trucks, bikes and the auto industry for national publications. And I am president and publisher of Troy Media Digital Solutions.
FILED UNDER:
FeaturedNissanCar ReviewsNissan ReviewsNissan TitanTruck Reviews

A Jeep Wrangler with a V8 may be in the works if this Wrangler Rubicon 392 Concept is any indication. 450-hp, 0-60mph in under 5-seconds, lifted & more.
Read more

Nissan’s Burlier TITAN XD Gets a Major 2020 Refresh But Ditches...