More Of A Cruiser Than A Performer 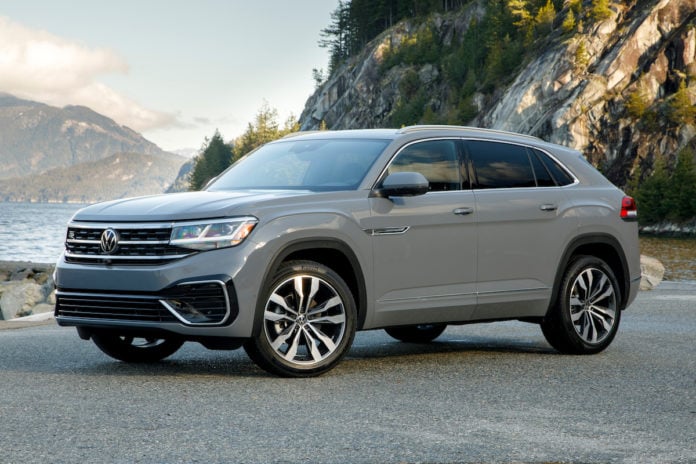 Whistler, BC – If you’re a Golf GTI fan, you’re not going to like the following statistics. In 2019 alone, SUV sales represented 41% of total VW sales in North America. The message is therefore clear at Wolfsburg: if it wants to survive in the land of the vast land of the Donald, it needs it widen its sport utility offering.

We flew up to Whistler, BC, to take it for a spin during its global first drive.

While the Cross Sport looks visually more striking and dynamic than a standard Atlas which we reviewed here, its mechanical components are a carryover from its big brother. It therefore rides on the same stretched MQB platform, powered by the same engines and even shares its interior. Brakes, suspension, tracks; they’re identical.

Under the Hood: More Of A Cruiser Than A Performer

Both engines are mated to an eight-speed automatic gearbox, and 4MOTION all-wheel-drive comes of course standard in Canada, a feature that will carry over to the conventional Atlas next year.

Where the Cross Sport distinguishes itself is obviously in the way it looks. The entire front fascia is different. The vehicle is shorter, yes, but the same width, which makes it appear more active. The rear section was also entirely redesigned, appearing stubbier, giving the vehicle a budget Audi Q8 look we rather like.

Standard 18 and optional 21-inch wheels are also unique to this model, as well as bespoke paint colors and interior contrasting materials and hues. Pricing starts at $38,995 for a base four-cylinder Trendline model and climbs all the way to a $56,185 for a fully loaded V6-powered Execline R-Line.

Volkswagen seems to have done its homework with the 2020 Atlas Cross Sport by offering North-American consumers exactly what they need: more styling, more room and, well, more SUV.

The Comfortline is where most consumers will sign the check as it’s the most value-packed proposition. You need to pay $45,195 to get one Add $2,200 if you want the V6.

Where the Cross Sport shines tall next to its main rivals is in overall cabin volume and capability. It’s a massive vehicle, measuring a full 64 mm longer than a Grand Cherokee and offering the largest cargo capacity in the segment.

The interior is roomy and comfortable, with plenty of leg and head room front and back as well as attractive colors schemes. We were however let down by cabin’s flimsy plastics and shady build quality. In a plus $40,000 vehicle, it’s somewhat disconcerting.

Trunk space is rated at 1,141 liters, besting Edge and Grand Cherokee, but a tad below Honda Passport (1,167 liters). However, once its rear seat is lowered flat, the Cross Sport beats its Japanese rival by three liters (2,203 L).

Where the Cross Sport disappoints, however, is in its overall driving dynamics and fuel economy. During our drive from Vancouver to Whistler, we found the V6 engine underpowered, preventing this Atlas from being quick off the line. Its main problem is that it needs to rev to generate all its power. In a vehicle that weighs 4,000 lb (1,814 kg), such a trait is not the best recipe.

Then there’s the way it handles in the bends. The Cross Sport feels heavy, clumsy and not particularly athletic. Body roll is apparent and steering feedback is nonexistent. It just never encourages spirited driving, an irony given the badge it wears.

Finally, we had trouble averaging below 14L/100 km during our drive. Even VW’s official numbers aren’t that impressive, with a claimed 12.7L/100 km.

We did however enjoy the eight-speed automatic gearbox. It responds quickly to your commands and shuffles cogs effortlessly. The vehicle is also rock-solid over road imperfections, a last bastion of its German-routed MQB platform.

There is however some hope from the drivetrain department. If towing isn’t on your list of priorities, we recommend skipping the V6 and going straight for the turbo four. While less powerful, it’s a peppy, energetic engine that provides plenty of low-end torque to get this big guy off the line in a much more efficient manner. It also significantly reduces front overall mass, resulting in slightly better handling dynamics. Towing for the 2.0T is rated at 2,000 lb (907 kg).

That said, don’t expect to save that much fuel with this engine, as you’ll probably save one or two L/100 km on average at best.

Volkswagen seems to have done its homework with the 2020 Atlas Cross Sport by offering North-American consumers exactly what they need: more styling, more room and, well, more SUV. It’s well packaged and capable enough to deserve its spot within its newfound segment.

But considering how solid the competition in this crowd is, presenting vehicles with more engaging driving dynamics, better fuel economy and better fit and finish, the Cross Sport sadly doesn’t exactly shine over the crowd. Instead, it merely blends in, taking a rear seat to a Passport, a Blazer and even a Santa Fe.