Further with Ford Trends Conference - 2016 and the future will be all about Cameras, Sensors, and Connectivity to Accommodate an Exploding Global Population. 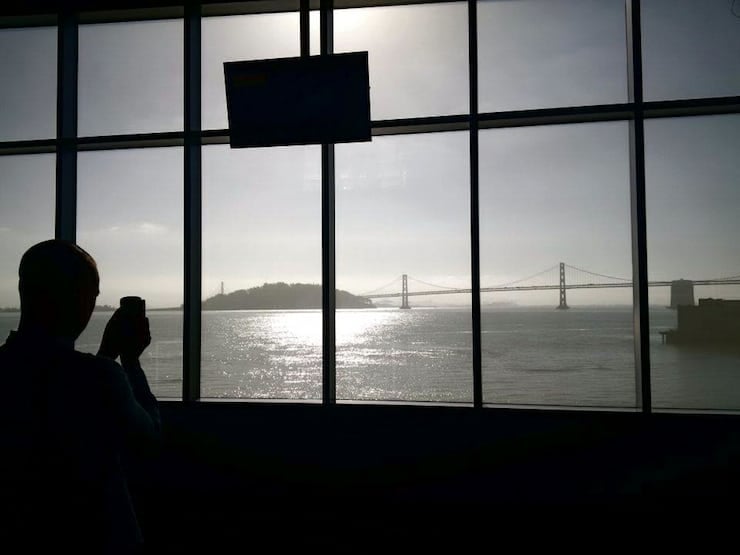 San Francisco, CA – Now in its fifth year, The Bay played host to Ford’s annual Further With Ford 2015 conference – an opportunity to showcase the automakers upcoming and imminent technology for the upcoming year plus share their latest in research, innovation, and insight into world trends.

The underlining takeway at this years conference, at least in my eyes, is that the world population is growing incredibly fast– and with CEO Mark Fields speaking at dinner flanked by huge dual slideshows depicting dramatic CNN-style future population explosions (literally, like human explosions) — the point hits home.

Granted, the global population boom isn’t exactly a revelation anymore but Ford recognizes this growth is occurring almost exponentially, where the streets of cities like London and Mumbai will see incredible congestion — less space, more people, not good. Ford’s prototype foldable electric bike, allowing drivers to park their vehicles outside the core with a collapsible bike in stow, is one solution, and one that certainly makes a lot of sense even for today’s world metro cities.

Ford says by 2018 cameras will be standard in all their vehicles; the 2016 Ford Fusion will be the segment’s first to introduce a standard camera.

Another trend to watch for: autonomous driving vehicles. Ford’s journey to higher levels of automation is well underway. And they feel they’re getting closer to making the autonomous car a real thing. While the idea of self-driving consumer cars (transporting our kids to piano lessons and soccer practice) may seem inevitable, the day of the completely human-free, totally autonomous car may be further down the road than we may anticipate – and Ford agrees. There are still remains way too many grave questions unanswered and looming: Will society actually accept autonomous cars? Can the government and insurance companies work together both quickly and harmoniously to make this work properly? Plus, a million other questions and concerns no doubt. Ford feels limited automation is almost here. But the full make-a-sandwich-while-you-drive days are still far in the future.

Cameras – the other big news item. Ford says by 2018 cameras will be standard in all their vehicles; the 2016 Ford Fusion will be the segment’s first to introduce a standard camera. Considering Ford was one of the first to introduce the rearview camera in the 2007 Expedition, it’s reasonable to say the automaker will push hard, leading the way with new camera technology, recognizing that cameras play a big part of our daily lives. But we’re not talking pictures here. Ford’s cameras focus on safety and pre-collision assist for preventative measures; keeping our vehicles in-lane, ensuring our auto high beams work, and generally working in tandem with new and improved sensors to keep us safe and provide convenience with technology like the new Trailer assist, and industry first.

And the idea of democratizing technology to the people — a term that came up several times throughout the day — is a strong indication Ford is taking a page out of Henry’s original playbook by taking the coveted and making it available and affordable to the masses.

Gone is the multicoloured, quadrant-style MySync (which I personally grew to like over the years; a quick corner-touch – one of four – got you quickly to the four basic car groups). Say hello to Sync3: Ford’s solution to a more intuitive setup with an all-new software/hardware. The new setup is striving to be in-tune with our everyday tech from phones, tablets, all of it — MySync was more functional where Sync3 is tapping into more tech with an intuitive interface.

The Sync3 finds easier controls, new hot buttons, and new zoom-to-pinch ability, plus AppLinks. But no onboard WiFi hotspot; vehicles will receive WiFi for upgrades but that’s it for now. With GM now offering full WiFi capabilities for everyone in the cabin, Ford likely isn’t far behind, but nothing yet. Available in the upcoming 2016 F150, the next Super Duty will include Ford’s most advanced camera tech yet; the F150 will find five cameras in total and Super Duty a whopping seven. But with added view angles and a game-changer trailer assist for those towing their boats to the lake will have little to complain about.

This backup assist when activated hands over full control to the computer, taking all control of the steering wheel. Great for towing. Won’t lie, it was unfamiliar letting go of all control – with a $50,000+ boat hitched up, it would certainly feel a bit more disconcerting. But

The Price? Ford wouldn’t disclose the upgrade price but said it wouldn’t be a pricey one; under one-thousand dollars. Where’s the future without wearable technology? Ford kicks it off with MyFord Mobile app extension coming to our smartwatches including Android Wear. Ford vehicles will provide their drivers the ability to check vehicle range (dude, where’s my car?!), battery charge and more for their plug-in hybrid or electric vehicle – all from their wrists.

This demo includes the Escapes ability to remote reverse via smartwatch. Gallery from the Research and Innovation Centre in Palo Alto, where Ford is researching and implementing new ideas and technology from sustainability using natural materials for car components and finding solutions for the continual quest for overall weight reduction, to foldable electric bicycles – the Ford MoDe:Me and MoDe:Pro prototypces – for congested future cities to other tech innovations and research you’d expect out of Palo Alto.

Full review of the new Defender 110 with the P400 powerplant upgrade. Sure, we take it off-road, but how does it perform on everyday roads?
Read more
Toyota