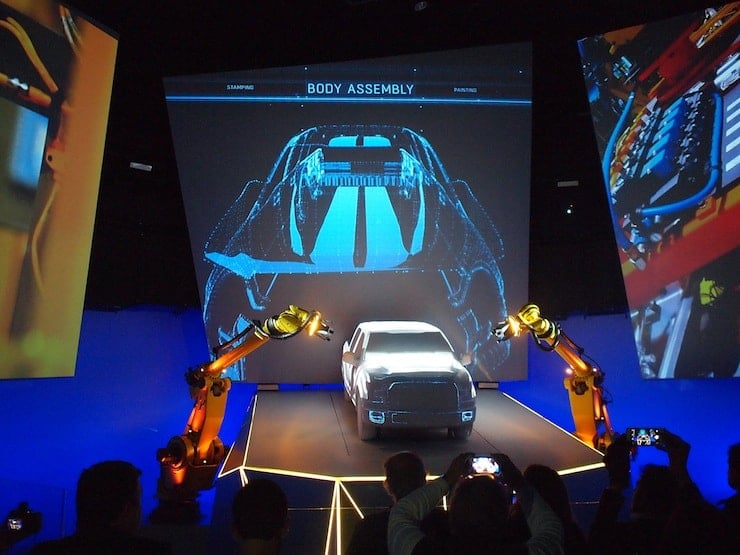 Story and Photos by Benjamin Yong

Inside the ultra-modern Art of Manufacturing Theatre at the Ford Rouge Factory Tour in Dearborn, MI, visitors are treated to a multimedia demonstration  — complete with lasers — showing how a Ford F-150 is constructed from start to finish. When you’re sitting there watching the show, it’s hard to believe that actual trucks are being put together just a few dozen metres away, or that the facility is nearly 100 years old.

Originally constructed by Henry Ford in the early 20th century, the factory was an industrial marvel where “ore came in on one side and a car out the other,” said Bruce Hettle, executive director of global manufacturing engineering at Ford.

“The Rouge is the absolute centre and heart of the Ford Motoring Company,” said Hettle during a brief presentation before a film on the building’s history was shown. In it, a narrator talks about the 100,000 workers that were once employed during the peak of the 1930s, the devastating effects of the ensuing Great Depression on operations, and the vehicles that were built there, including the long run of the Ford Mustang from 1964 to 2004. Facing a possible shutdown in 2004, the company funnelled $2 billion into a complete overhaul of the site that involved the changes necessary to convert from sports car to truck production, the launch of the tour, implementation of sustainable manufacturing technologies and even the a 10.4-acre garden dubbed the “living roof.” The plant was recently renovated again to prepare for the production of the brand new aluminum 2015 Ford F-150, which involved the installation of 500 additional robots in the body shop and dirt detection and automated painting systems.

As interesting as the films were, I was looking forward to the behind the scenes part the tour where guests are able to walk along a catwalk above the actual factory floor. Parts of F-150s, in all colours, moved along the nearly seven-kilometre assembly line where employees inspected, installed and tightened things. At one section, they crawled inside the cab, and during another, they hovered alongside, door in hand. Some interesting facts learned about the new F-150 during the tour: it features 11 available class-exclusives like a 360-degree camera view, integrated loading ramps stored in the pickup bed, LED headlamps and taillamps, sideview mirror spotlights and a remote tailgate release, to name a few; nearly 700 pounds have been shaved off thanks to its aluminum platform; and the truck is more fuel efficient than ever before, in particular those equipped with the new 2.7-litre EcoBoost engine.

The Ford Rouge Factory Tour opens Monday to Saturday from 9:30 am to 5:00 p.m. For more information, visit here