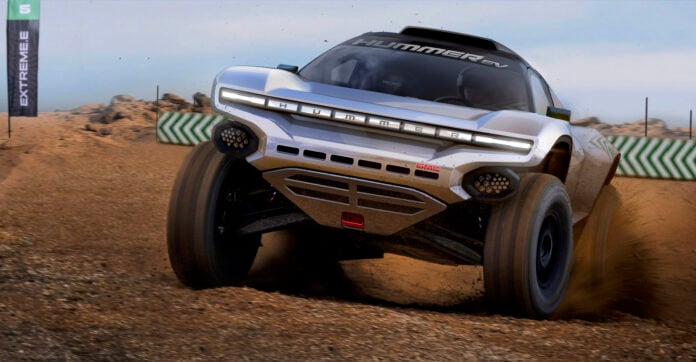 GMC plans to unleash their game-changing supertruck sometime late 2021, and now, they’ve teamed up with Chip Ganassi Racing (CGR) on a new multiyear sponsorship, producing a HUMMER EV-inspired, 550-horsepower electric SUV for the Extreme E season in 2021, piloted by racers Kyle LeDuc and Sara Price. Though not the actual 1,000-hp and 11,500 lb-ft of torque 2022 HUMMER in truck form that will go on sale, this off-road version remains a big deal for both companies. As GMC puts it, “Both GMC HUMMER EV and the Extreme E series are designed to be revolutionary – to challenge perceptions of electric vehicles and to showcase their true capability.” CGR’s CEO states, “Not only will Extreme E be a thrilling motorsport, it will also showcase the performance and benefits of electric vehicles.” Details are slim about this extreme off-roader, aside from sporting nearly half the horses. But we can safely assume it’ll be powered by GM’s new Ultium battery system paired to a three-motor e4WD propulsion system. Aside from that, this thing looks mean with those burly tires, massive front skid plate with a single red tow hook, and stretched-out logo spanning east to west. Extreme E is a five-race global championship, kicking off with the Desert X Prix race in Saudi Arabia from April 3-4, 2021.